Do the numbers 26.2 mean anything to YOU? 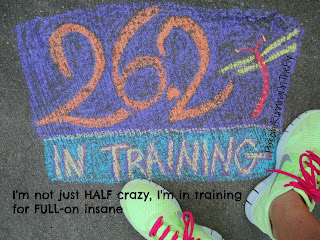 I heard somewhere that a marathon doesn't just change you at the finish line, but also at the start line.  Hmmmmm.  I would argue that it changed me the moment those numbers, 26.2, started dancing in my mind.

Granted, the first several times those numbers appeared in my thoughts, I quickly ran from them (no pun intended).  I have been running half marathons for 5 years now, and have been QUITE content doing them.  Then, I decided to start a page on Facebook, Running On The Fly. 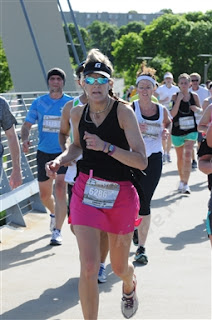 Suddenly, I found myself immersed among LOTS of runners.  Runners from all over the world, not just from my hometown.  Runners who also love to run outside year-round. Runners who didn't run when they were kids. Runners who took on the challenge of running farther than a 5K.  And, before I knew it, I had become friends with runners who had either run marathons, or were training for their first one. (gulp)

Quickly, I laughed those numbers out of my head (again).  I'm a 13.1-mile runner after all, I should just be content with that. Right? 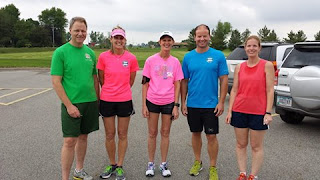 Well, the more runners I became acquainted with, the bigger those numbers grew (and more frequently they kept reappearing) in my head.  Finally, I realized that there will never be a "perfect" time to do a marathon. Why wait until I run a sub-1:45 half?  The thrill of crossing the finish line won't be any more euphoric if I wait until the last kid goes off to college than it would be if I conquered the 26.2 miles in a few months......why not just do it this year?  Why not just do it in September? 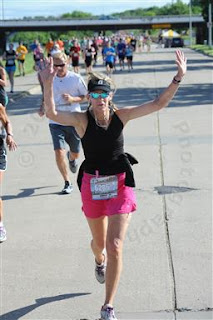 Truthfully, as much as I love the 13.1 distance, it really isn't much of a challenge for me anymore.  I continue to work on my speed and pacing to finish each race faster...but, that is something I can continue to do for the rest of my life.  The thought of doubling that distance, well... quite honestly, is a little scary.  Actually, it's VERY scary.  But, there was a time when running 3.1 miles was a challenge...and I can now run that (plus an extra 10 miles) non-stop.

So, I made the commitment and officially registered for the Quad Cities Marathon, scheduled for September 22nd. This week is the point in my training schedule where I will run the farthest distance of my life, going past the 13.1 miles that I have grown so comfortable (and secure) with.  I know I won't run it fast, but I know I will be able to complete it.

What have I learned so far?  Doing the long runs each weekend makes me feel like I'm constantly racing, but without the expense of registration fees.  I have to charge my Ipod weekly, continually be drinking water to stay hydrated and my favorite pair of wool running socks are spending more time in the laundry room than on my feet.  One of the perks, though, is that my recovery time gets faster every week.  The first time I ran a half marathon (5 years ago), I had a difficult time walking (without resembling Frankenstein) for several days...now, I can simply jump in the shower, do a few stretches and start the whole hydration process all over again for the following week's long run.  Progress, I'll take it! 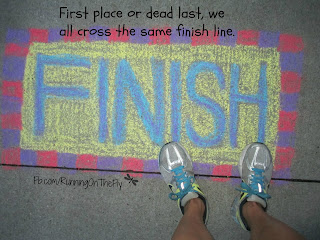