Want to go Streaking with Me? 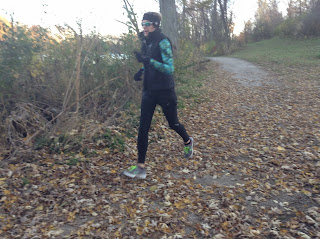 Have you ever streaked?

Runner's World magazine is promoting runners to participate in their holiday running streak.  They are asking runners to commit to running at least one mile every day from Thanksgiving until New Year's Day.  You know, to give us an incentive to stay active during this season which is often filled with over indulgence of food and drink.

Streaking. Running everyday.  Yikes, that sounds like a lot of running...or is it?

Myself, I am not a daily runner.  Never have been, probably never will be.  But I gave streaking a whirl back in April of this year, and it really wasn't as bad or tedious as I'd anticipated. I simply did my usual training/running routine, which is running 3-5 miles a couple times during the week and then doing a long run on the weekend.  However, on the "non-running" days when I normally would have been doing some form of cross-training, I added a quick 1-mile run.

The first few 1-mile attempts were the most difficult.  It took some trial and error to figure out where to run to get the exact mileage.  I live a few blocks from a beautiful college campus, and mapped out a route that went around a few blocks on the central campus.  I ran the few blocks to this "route" as a warm-up, then ran the 1-mile loop, then ran home.  Honestly, it took less than 15 minutes from the time I left my front porch and returned back home.  Since it was such a short distance, I ran it outside everyday...rain or shine, cold or warm temps, windy or not.  The bonus came when I added up my mileage for April...doing this little extra mile on the "non-running" days gave my total monthly miles a boost of 20 extra miles (some days I ran a little more than the 1-mile minimum).

I am challenging my followers on my page, Running On The Fly, to do this challenge with me to finish off 2013 with a bang.  It's very much outside of my comfort zone, but I am willing to take on the challenge and here are some tips which may help others to give it a try as well.

First thing, find a route that will work for you. Since it's only one mile, consider just running laps around the  block where you live.  If you don't live in town,  find a block in a nearby town, possibly near where you work or by a park.  A mile is usually equal to the distance of 10 city blocks, therefore 2.5 laps around an average city block will get you to one mile in distance. I recommend running this in reverse on alternate days or you may tire of it. Also, most streets aren't level so alternating the direction of your run will give your body a break form always running on the same plane. If you can't remember which direction you ran on the previous run, do as I do....if it's an odd number day on the calender, I turn right as I head out of my driveway (the word "right" has an odd number of letters in it), and I go left on the even numbered days (you guessed it!  "left" has an even number of letters).

Most runners have access to a Garmin or mileage counter, but you can also use the trustworthy odometer in your car to map out a mile.  If you're not a fan of running in circles around a block, run the equivalent of half a mile then turn and run back.  Or walk a few blocks to warm up, then do the half mile, turn, run back and walk the last few blocks to cool down.

Make this 1-mile run a game (speed work in disguise).  Time yourself each time you run it (if you're doing the same route repeatedly) and try to run it faster each time. You will most likely see a difference in your speed after the first week.

Since it's only a short mile, it shouldn't take you more than 10-20 minutes to run  it.  Set your alarm a few minutes early and do it before work.  Maybe consider doing it on your lunch break. Or do it  while you're waiting for dinner to bake in the oven.

If you have a treadmill, or access to one, you have an advantage (if you enjoy using it).

If you have never streaked before, or if you're a relatively new runner, use caution.  I highly recommend not going farther than the 1-mile minimum or you may risk getting injured.  Also, if at any point during the challenge you feel any kind of pain...there is no shame walking, or taking a day off.  Pain and discomfort are two different things, you don't need to be a hero.