Fighting for Air in Chicago! 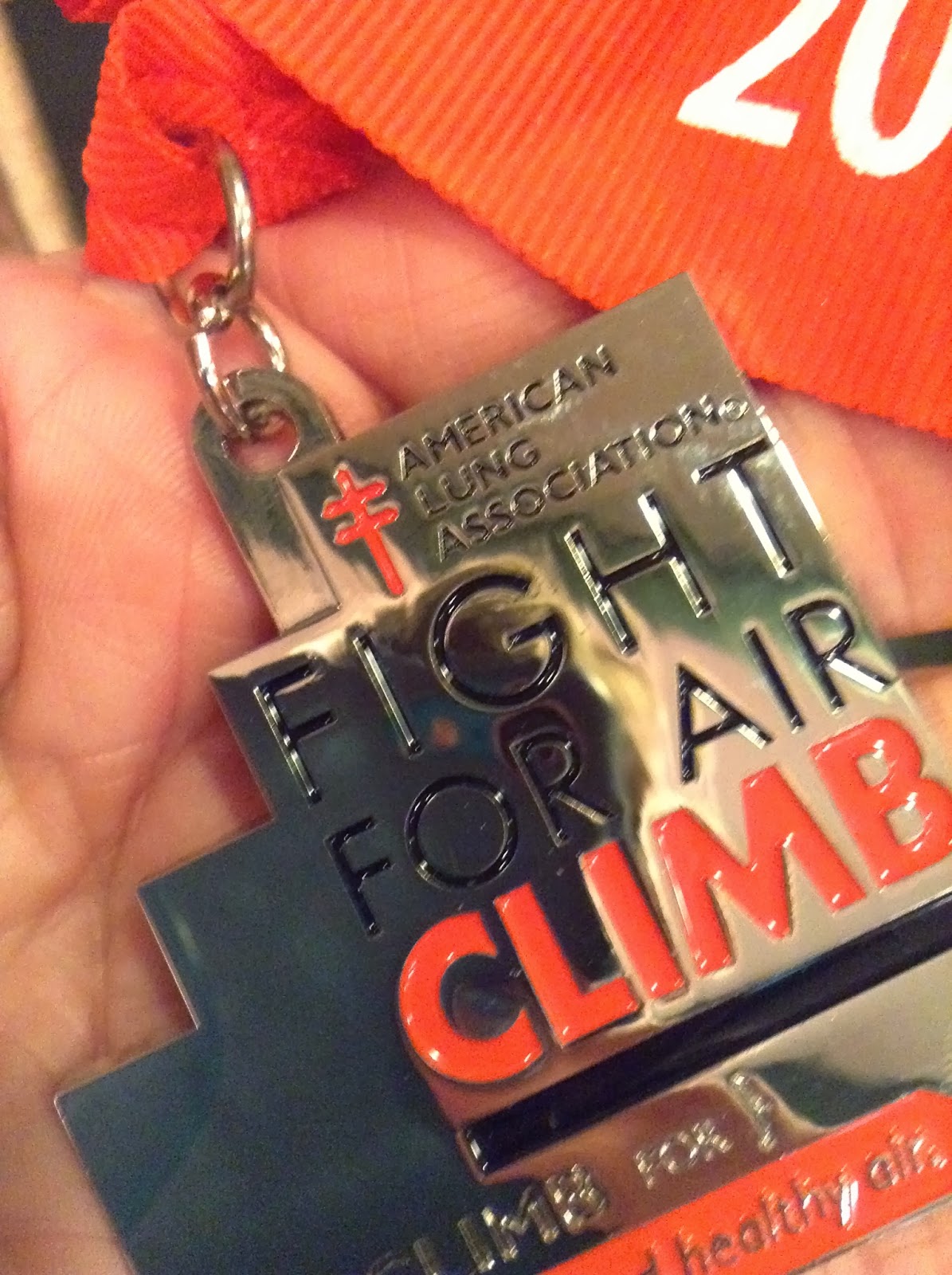 Last April, I did my first Fight for Air Climb for The American Lung Association.  This involved climbing 66 flights of stairs amongst 3 tall buildings in the city of Des Moines.  I am registered for the 2014 event next weekend.  This past weekend I was given the opportunity to venture to Chicago and do the Climb there.  YIKES!

This venue was a much bigger event, given the size of the city.  This Climb had participants climbing the four Presidential Towers in downtown Chicago.  That's right, four towers...not just three tall buildings like in Des Moines.  Oh, and each tower has 45 flights of steps, for a grand total of 180 floors. YIKES (again).

Last year I did the Climb as an individual, this year I was recruited to join Team 27.  Team 27 was formed several years ago in honor of and support for Tom Muselman, a Des Moines-based banker who was the recipient of a double lung transplant a few years ago.

This also was the Spring-Ahead weekend, which made for one less hour of sleep.  Fortunately, our scheduled climb time wasn't until 9:55.  We had plenty of time to rise and shine, pay a visit to Starbucks, hail a cab and get to check-in.

I didn't quite know how to prepare for this event.  I had done plenty of stair-climbing, and my legs are in pretty good shape from being a runner.  I wasn't sure if I should do a taper, since this climb was so much bigger and more demanding than the other one.  Or, should I carb-load?  I didn't expect to spend a long time climbing 180 flights, but I knew it would be strenuous and require a boost of energy.

Check-in was at the PepsiCo building, and we were escorted across Monroe to the first Presidential Tower, where we could check our gear and get out timing chips.  Seeing the four Towers was exciting, but a little intimidating.

I must say this event was very well organized with numerous enthusiastic volunteers. As we lined up to take the stairs, countless people were cheering and high-5ing the participants.


As I began my climb in Tower 1, I could feel the excitement of what was before me.  I started out taking the steps two-at-a-time.  That lasted for the first 10 flights or so....and I knew things would need to change for the remaining 35 flights.  These stairways were narrow, making it difficult to pass other climbers, and only had handrails on the "inside" edge of the steps.  Also, the steps were steep!  Instead of going up one long stairway of 12-14 steps, each flight had double stairs...6 or 7 steps, then you'd turn and do another 6 or 7 steps (in the opposite direction) between each floor.  Catch-22!  Although the stairs appear shorter than normal, you have to do two of them for each floor, and you have to pause briefly as you change direction halfway through.

I finished the first Tower in 7:19.  I grabbed a cup of water and joined the other sweating/panting/breathless racers and waited for the elevator to take us down.  I was given a Team 27 shirt to wear, but was already contemplating stripping it off and just going with the tank top I had underneath.

We all had timing chips attached to our shoes.  There were timing mats in the hall leading to the stairs and also mats in the doorways, exiting the stairways at the top of each building.  This meant that we'd cross the "start mat" briefly after exiting the elevator (from the previous Tower) and we then had to make our way to the next Tower.

My strategy for Tower 2 was to start off taking the steps by two (again), but to do it slower, so I'd (hopefully) be able to maintain the two-step intervals longer.  My theory was thrown out the window after the first 5 or 6 flights.  UGH!  This was really tough!  The steps were a lot steeper than they appeared, and the stairways were stuffy (probably from all the heavy breathing!).  Thankfully, there were water stations on the 19th, 34th and 48th floors, so that gave me the chance to pause for a few seconds and slam some water and catch my breath.  I finished Tower 2 in 9:07.  And I yanked off the team 27 shirt and draped it over my fuel belt (which was holding my phone).  Normally, having a flapping tail-like thing hanging over my belt would not happen if I was running, but for stair-climbing it worked fine.


Tower 3.  By this time, I had resolved to just single-step the stairs.  The crowd of climbers had thinned out (because some had bailed after the first two towers), so I didn't have to worry about passing too many people.  We had to cross the street (via the skywalk), so this gave us a little more time in between towers, but it also showed up on our chip time.  Some climbers ran between towers, but most others (myself included) walked.

So, onward I climbed.  I never felt fatigued, but I certainly felt winded and out of breath.  Another little "mind game" to overcome was the numbering system of the floors. We were climbing 45 flights of stairs. But when you start on the  third floor, and you finally reach the 45th floor...you still have three flights remaining. (ugh!)  This was a small detail that I kept forgetting each time I reached the 45th floor (in each tower).  I finished Tower 3 in 10:50.  Woot! Woot!  Almost done!!

The 4th Tower went well, though I was really feeling the effects of so many steps in the stairways.  More and more climbers were pausing on the landings and at the water stations. Very few people were smiling (except for the volunteers who kept encouraging us as they offered us water).  I tried to pay attention to the many posters on the walls of the stairways, which paid tribute to friends and family members who were no longer with us. I said several silent prayers for them, and felt so honored and lucky that I was able to climb 180 flights of stairs.  I bet they would have gladly traded places with me if they were able to do so.  I finished Tower 4 in 9:28.  And I drank several cups of water in celebration as I waited for the elevator.

This Climb was tough, no doubt about it.  The 66 floors in Des Moines got nothing on this challenge!  My finish time was 36:44.  I was hoping to be done within 45 minutes, so I am very pleased.  I finished 26th out of 171 women within my age group (this stat is from Tower 1; everyone climbed the first tower, but not everyone climbed all four of them).  Out of the 548 women who did climb all four towers, I finished 142nd and I placed 517th out of a total 1034 climbers (male and female combined) who finished all four towers.