Fighting for Air in Des Moines (for the 2nd time) 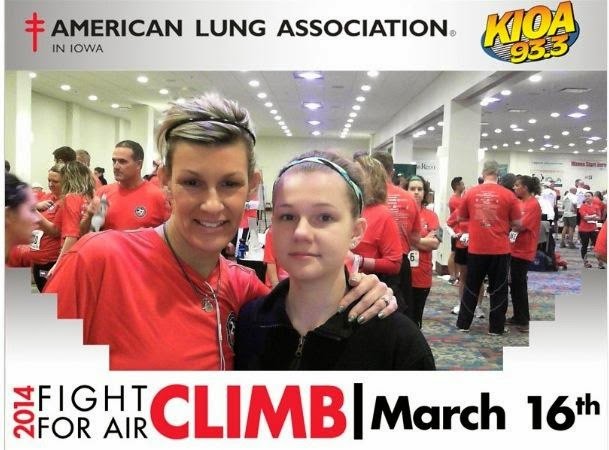 Fight for Air Climb.  One of my favorite challenges. EVER.

That's right.  I did some serious leg work in 8 days time.

This is one event that was just as exciting the second time as it was the first. Even though I knew what to expect (thigh fatigue, shortness of breath, dry mouth, sweaty forehead, etc.), there was still a little bit of "unknown" territory.  The three buildings we climb in Des Moines are off limits for participants to train in (two are business buildings and one is a hotel), so there is no "general public" access other than on Climb day.  I also live an hour away from these buildings, so even if there was free access, it's not worth my time to drive there just for training. And my legs took a bit of a beating with all the happenings in the week leading up to the Climb.

I did my training on the stairway in my house, both for last year's event and also for this one.  I take the steps two-at-a time, and sometimes I do three-step intervals.  Up and down, either 50 times per session (when I don't have much time) or 100 times (when I'm feeling bad ass).  The three-steps go slower, but work the thighs/buttocks more effectively and the two-steps are much faster, giving me some serious cardio work. 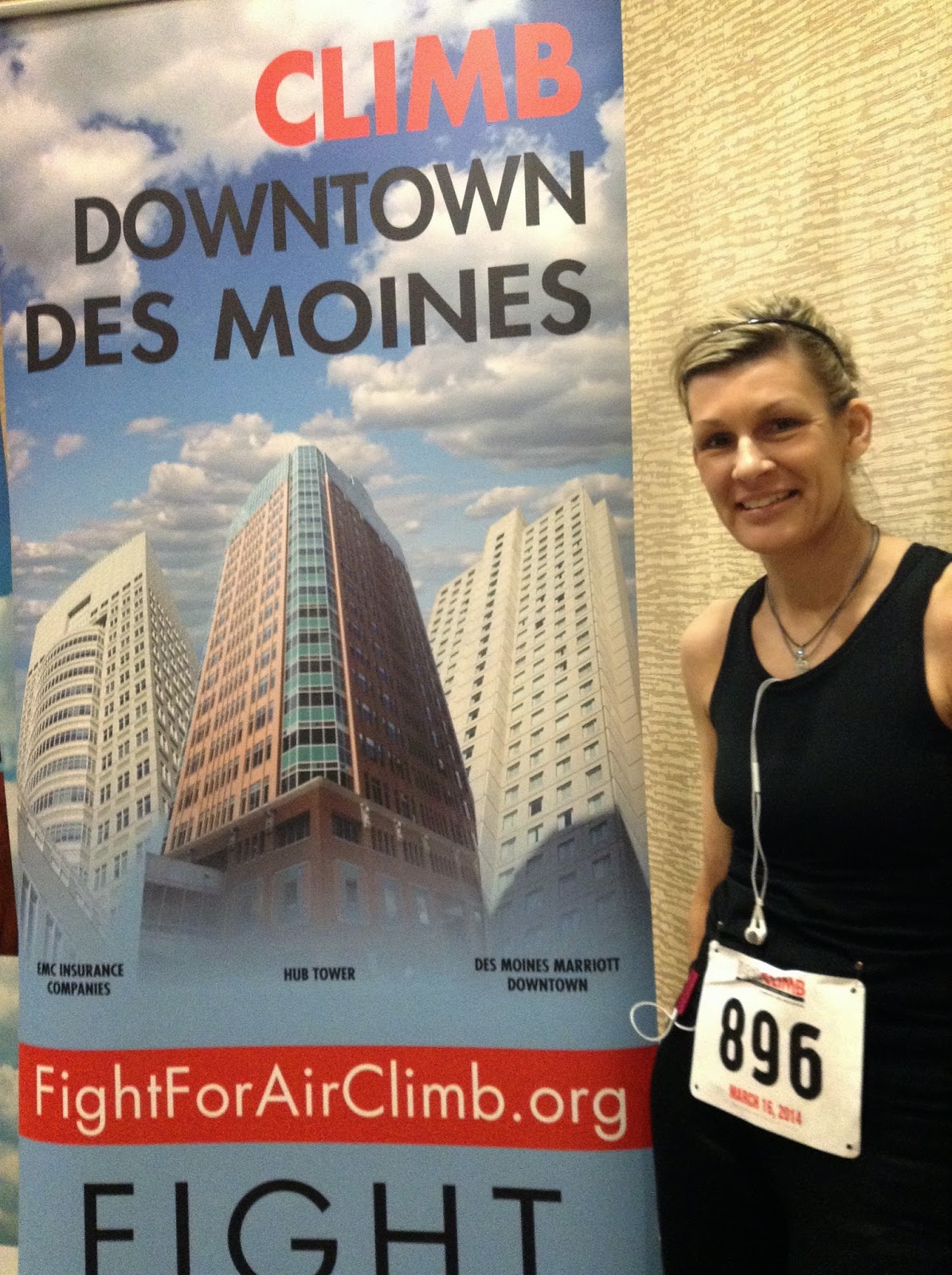 The Fight for Air Climb is affiliated with the American Lung Association.   Participants have the option to climb 1, 2 or 3 buildings, but they have to climb them in sequence.  You can climb as an individual or on a team, but every participant is required to raise $100 in donations (in addition to the registration fee).   This year the Climb in Des Moines raised over $241,000 and had more than 1,100 participants.

Since I had done this event before, I was hoping to beat my finish time from last year.  I had done the Chicago Climb 7 days prior, which involved  180 flights of stairs, though, and I knew my legs were still recovering from that.  The couple of runs I had done during the week were slow and sluggish, and my legs felt very heavy and tight for the Leprechaun Chase on Saturday.

We lined up in waves, and were escorted to the first building, the EMC Insurance Companies building.  I waited my turn (approximate 10-second intervals between climbers), and before I knew it I was back on the steps.  I was able to run the steps two at a time for the first 10 flights or so, then gravity took over.  I continued with two-step intervals, but had to slow my pace a bit.  I made it to the top in 3:17, which put me ahead of my time from last year (3:39).  Already, though, I was feeling very hot and slightly exhausted!

I drank a quick cup of water, rode down on the elevator and was escorted to the second building, the Hub Tower.  The climb didn't seem any more difficult (given the state of my over-taxed legs), but it did feel much hotter this year.  I remembered there being fans blowing in the stairways last year, but there weren't any (that I noticed) this year. Also, last year my climb time was early in the morning and this year I didn't start until 11:00, so there had been a lot of people before me probably breathing just as heavy (if not even more so).  I finished the second building in 4:05, still ahead of last year (4:39).

More water, and a few minutes of lag time waiting for the elevator, allowed me the brief chance to catch my breath.  One building remained, and it was the tallest of the three (31 floors). My time from the first two towers had me almost a minute ahead of last year's finish time, so I felt great.  I knew if I kept climbing with my two-step intervals I'd be well on track to beat my 2013 time.  The third building starts off with the first few floors having split-stairways (going up 6-8 steps, then turning with 6-8 stairs in the opposite direction) and the remainder to the top are single-stairways (12-14 steps each) with a landing to walk around before reaching the next stairway right above it.  All went well, and I reached the top in 5:21, ahead of last year's 5:40!  Total time for all three buildings was 12:43, an entire 1:15 faster than last year's 13:58!

All finished with climbing, I headed back to the  main reception area to meet back up with my family (husband and two of our kids).   I stopped to check on my official finish time and they gave me a print-out with a breakdown of each times for the three buildings...and I also received a ribbon for beating my time from last year and an Alumni pin (since I was a returning climber).  The medals had a new design this year, it matched the medal I received in Chicago but this one had a "Fight for Air Climb - Des Moines" ribbon. It turns out I finished 5th out of the 44 gals in my age group, and I placed 226th out of the 828 climbers who did all three buildings. 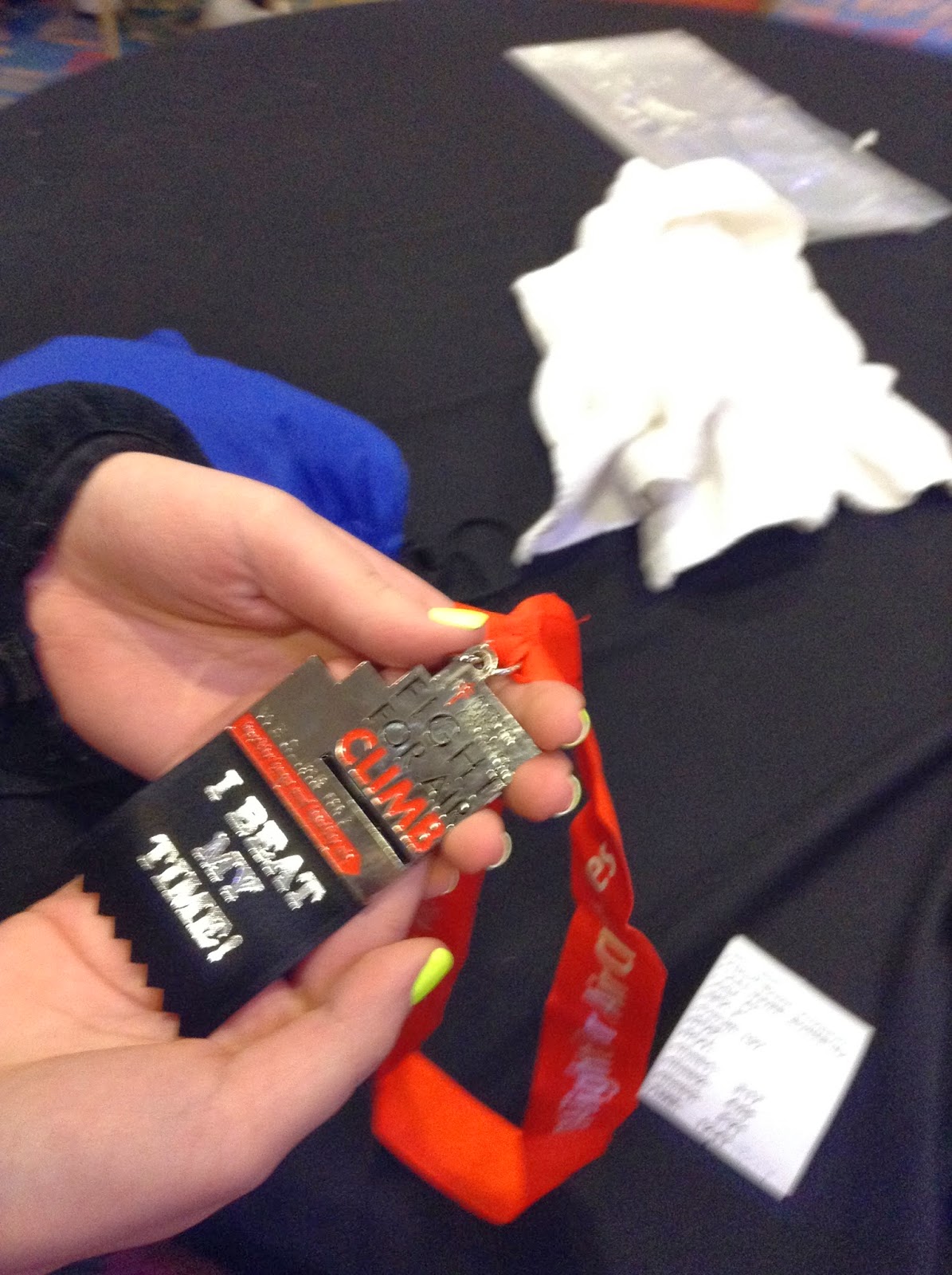 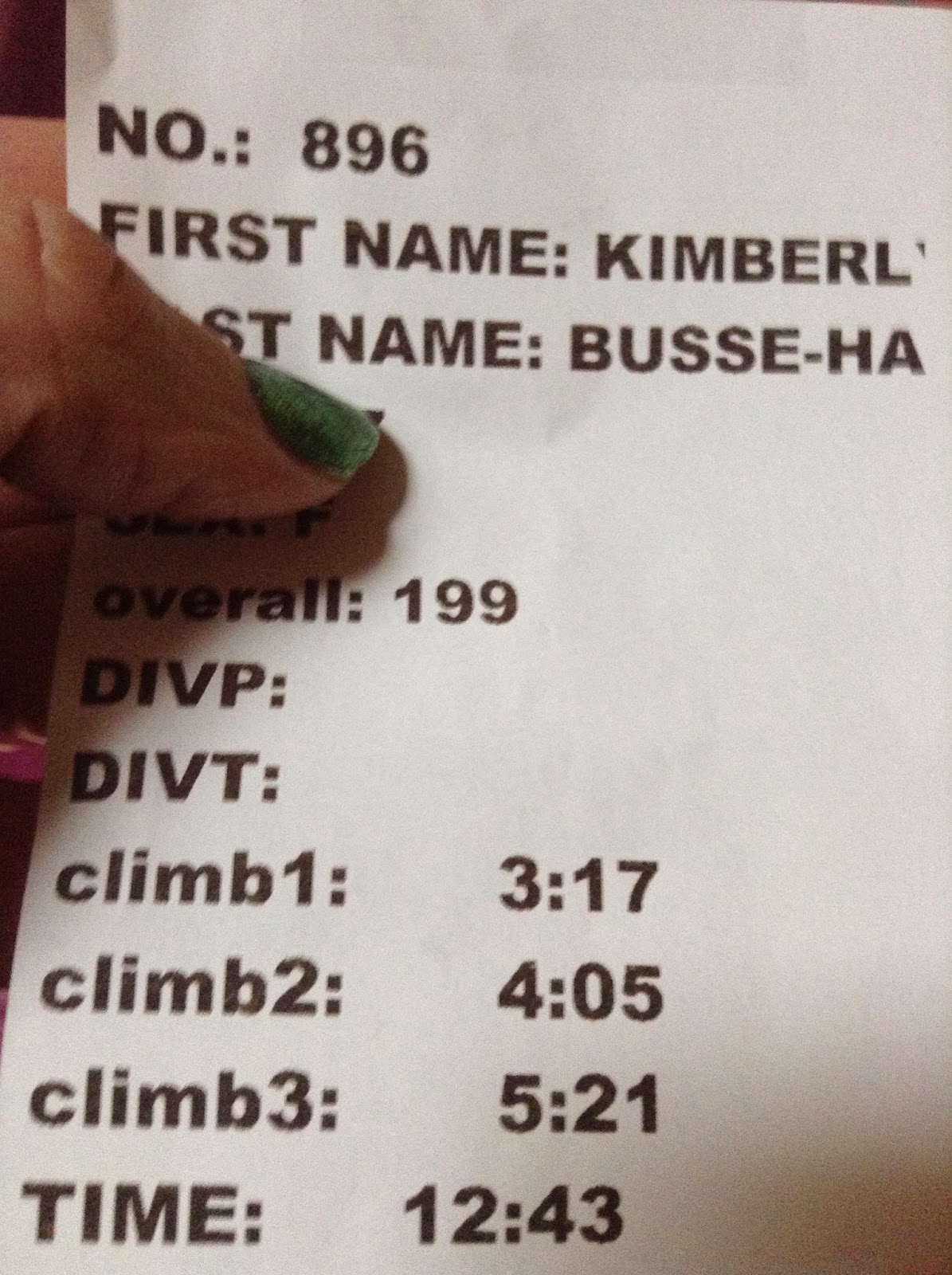 As we were getting ready to leave, all the firefighters were lining up for their turn.  There is a separate challenge for law enforcement personnel as well.  This was a real neat thing to see, and very emotional.  Most of the people in the room stood and clapped and cheered for them as they filed out, heading to the first building.  True heroes.  They're not afraid to climb a bunch of stairs, in 70 pounds of gear none the less. 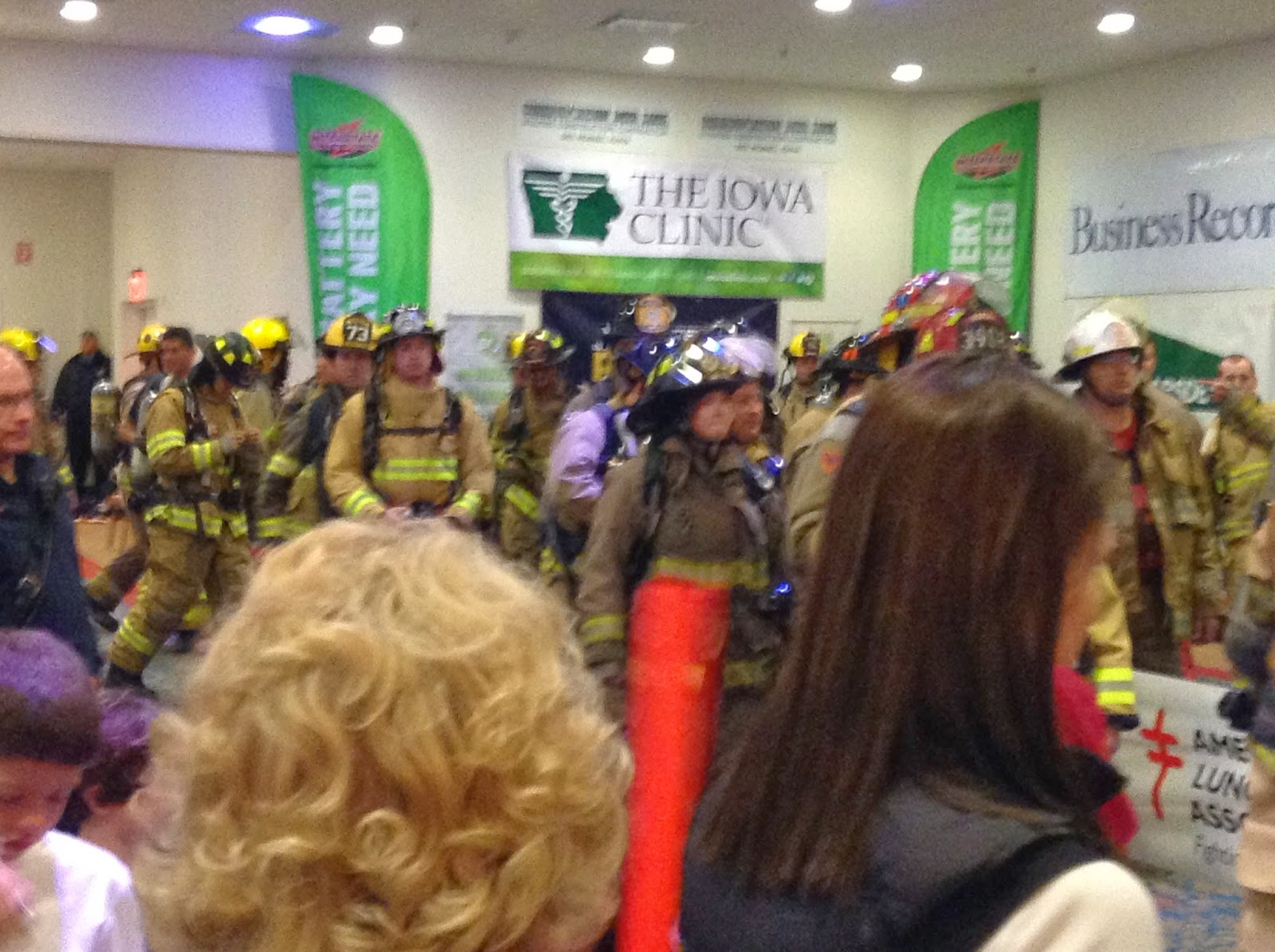 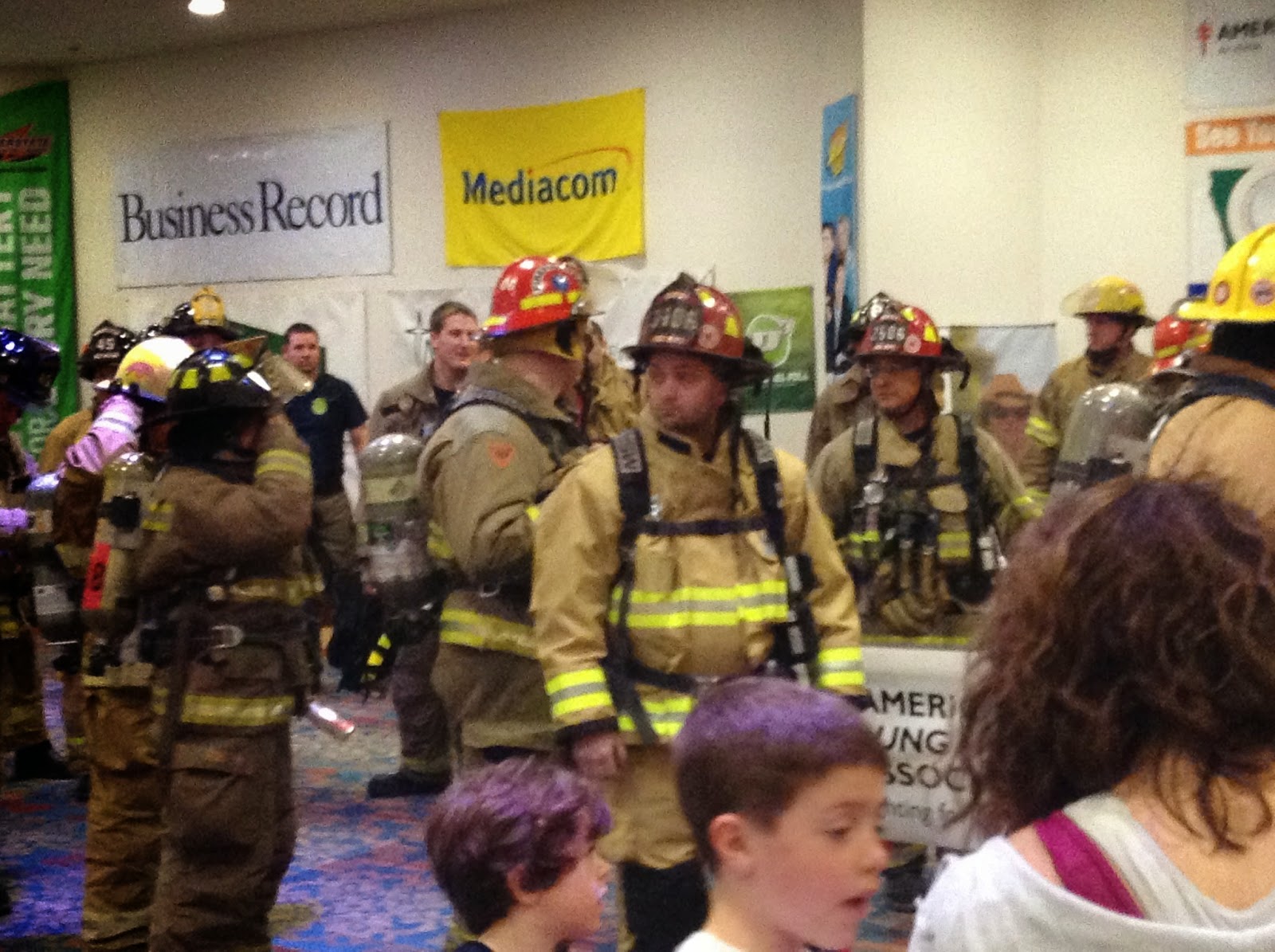 So, will I do this again?  Absolutely!  I love physical challenges like this, and now that I've done it (more than once) I have the added challenge of doing it faster each time.  This year I raised $187, almost double of what I collected last year, so I also have the challenge of increasing that next year as well.

Anyone care to join me?  You will not regret it! 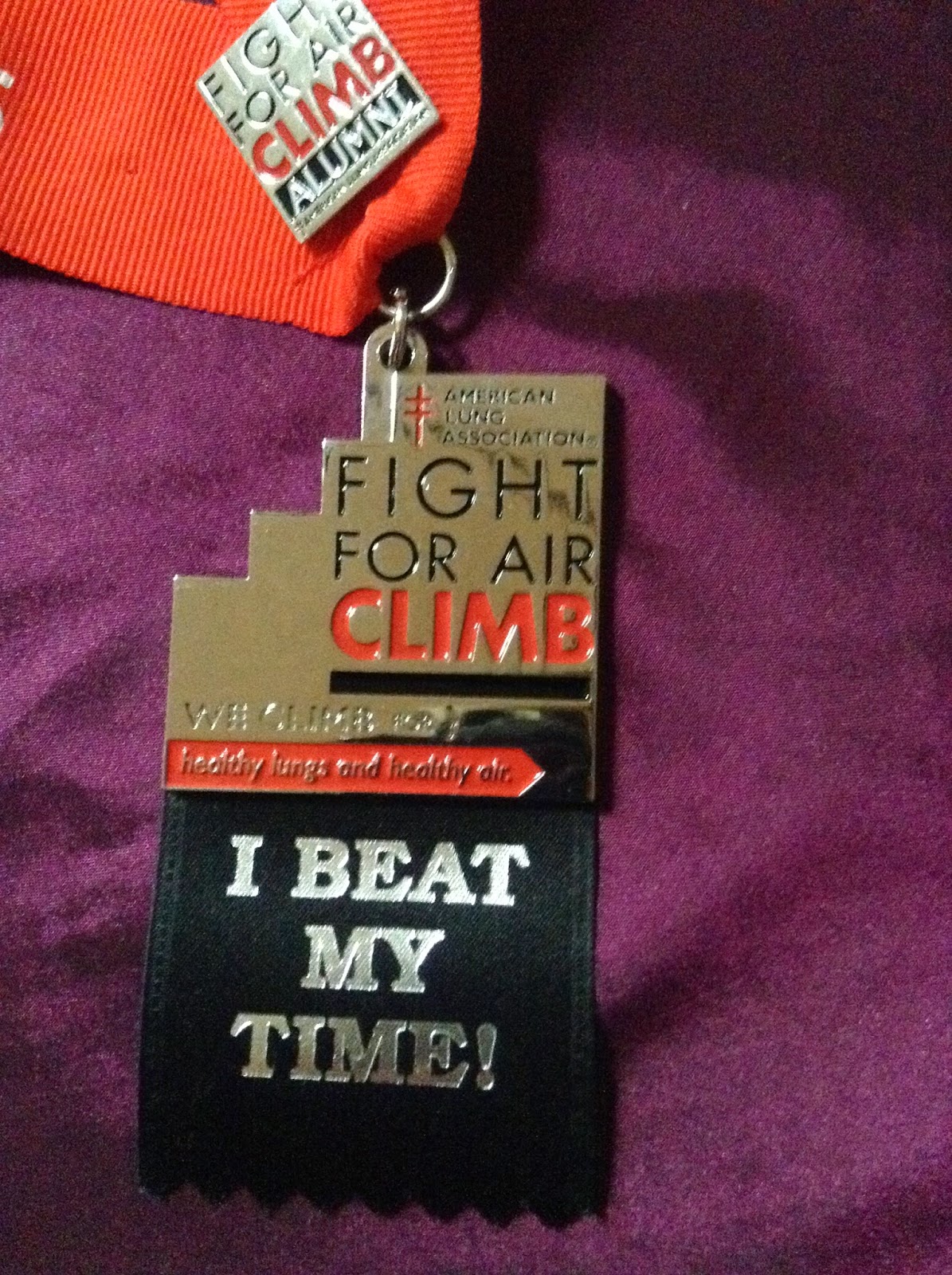