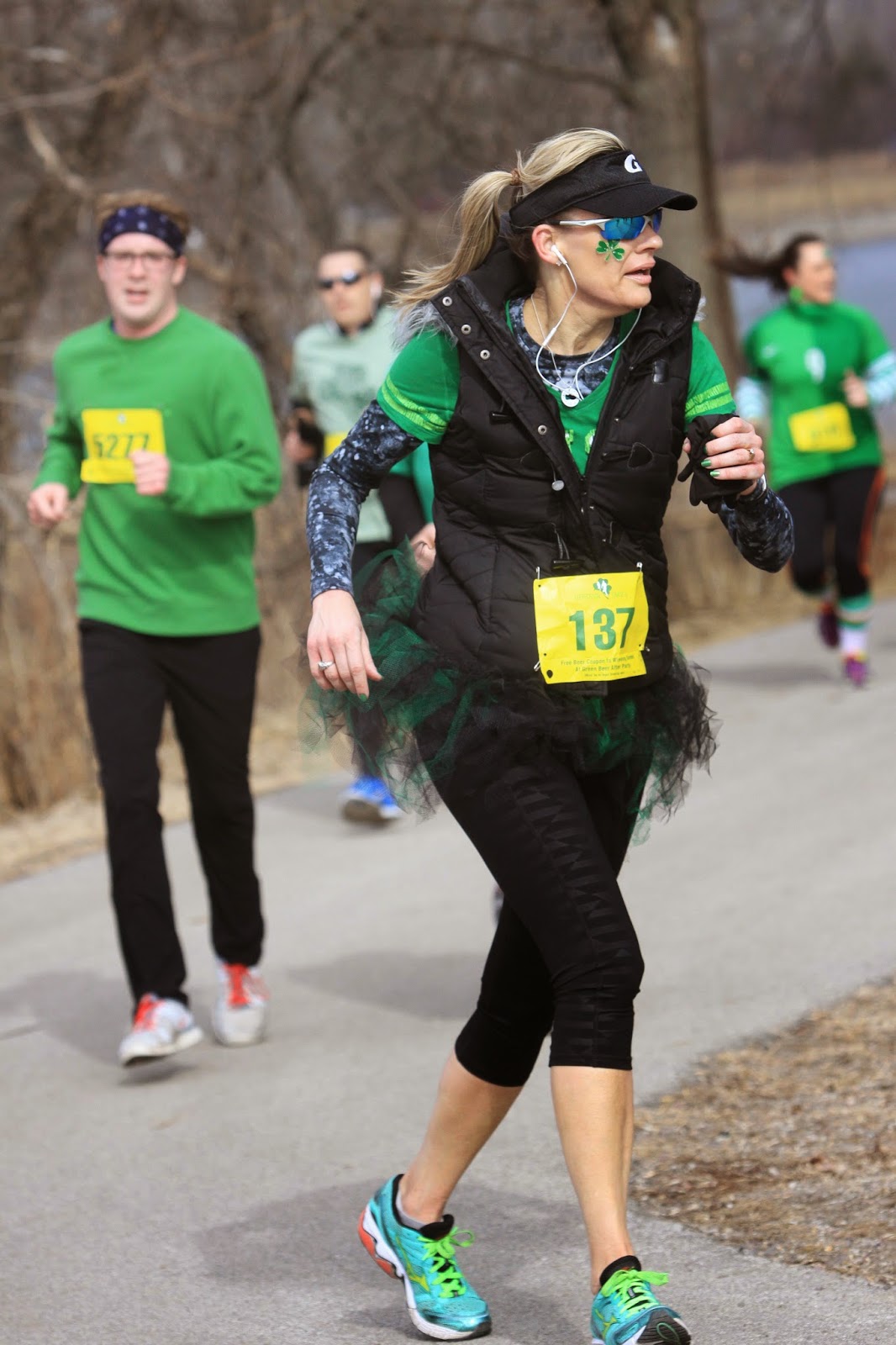 Have you ever dressed in a tutu?  Ever been in a group of gals being chased by a group of guys?  Or have you ever done an event with a St. Patrick's Day theme?  I can officially say I have done all of the above...all in the same race, none the less.

The Leprechaun Chase 10K is a fun-filled race based on the premise that the Lasses (gals) start the race five minutes ahead of the Lads (guys).  The Lads, consequently, chase the Lasses.  The first racer to cross the finish line then wins a free (green) beer for all of their "team."  This year the Lads were the victors, but us Lasses had fun regardless. 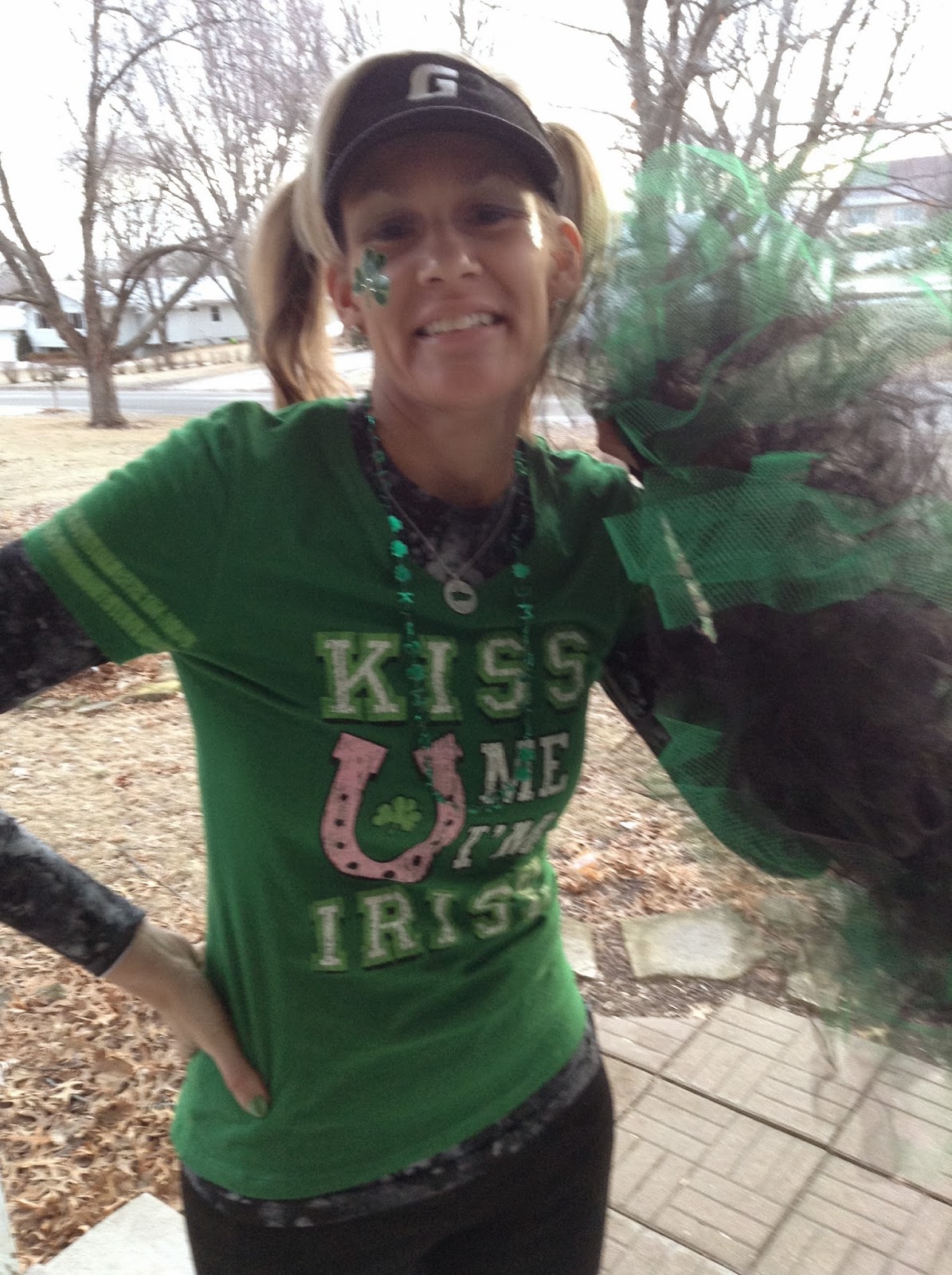 This was to be my inaugural running-in-tutu event.  I have done several fun races,  but have never worn a tutu in any of them.   And I was looking forward to just simply running for fun, with no self-imposed pressure to break a PR.  Seriously, I am not a competitive person.  I became a runner to become more fit, not to see how many other runners I could pass on my way to the finish line.  I'm not super fast, and I am quite content with that.  Although my speed has improved a lot in the past (almost) nine years, I will never be in the front of the pack. 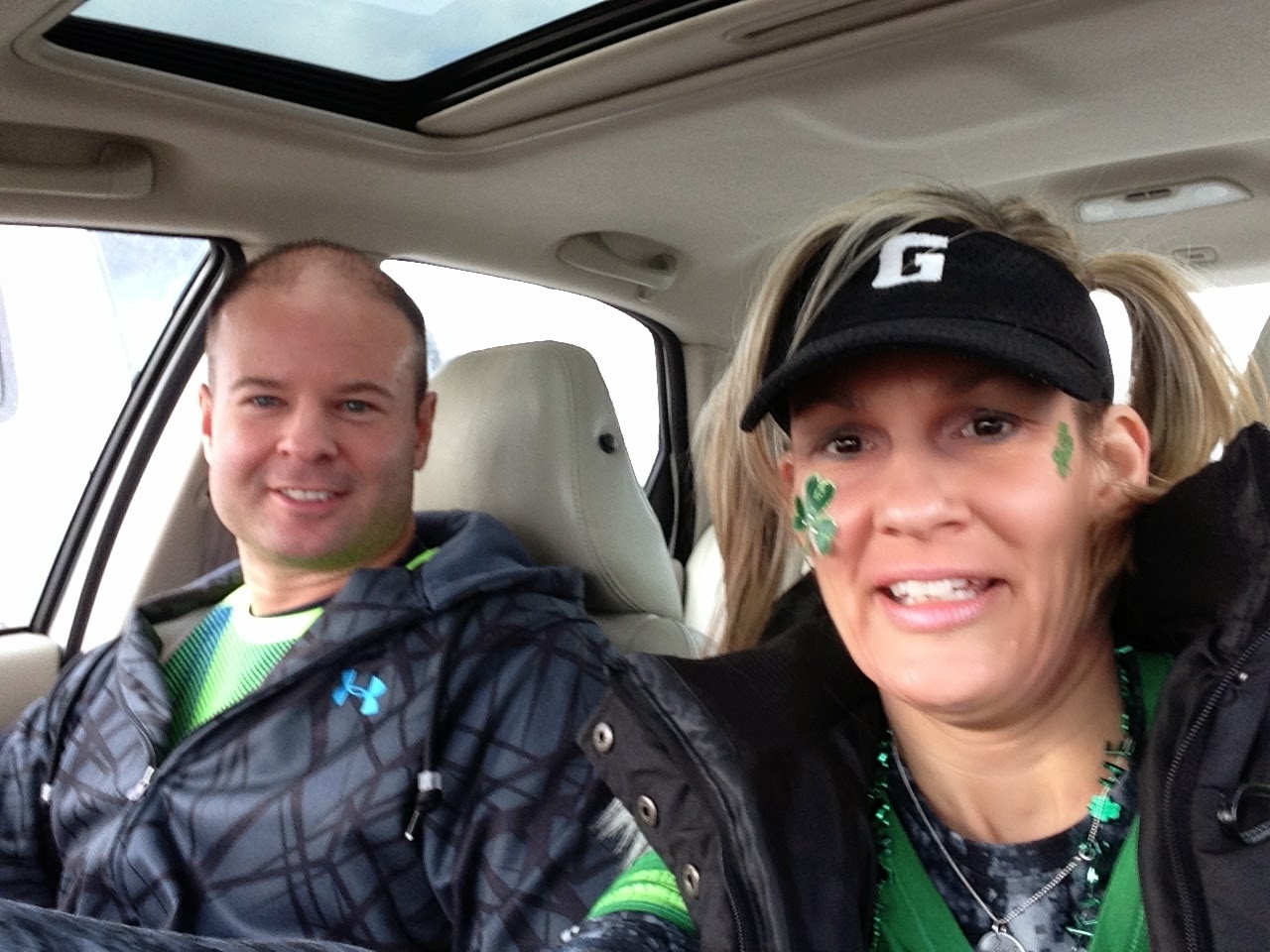 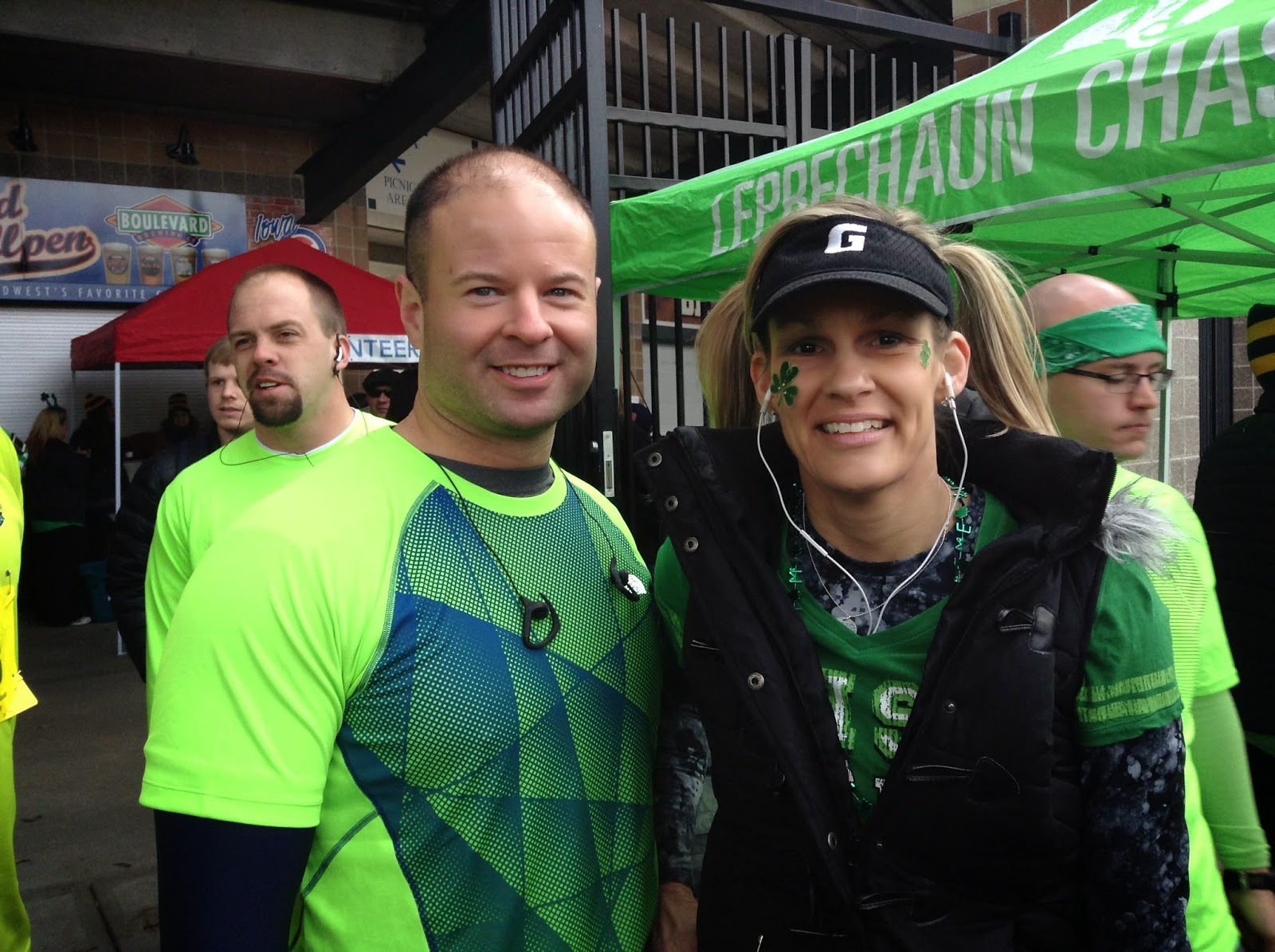 The race began at 10:00, so we had to leave town around 8:00 to allow an hour or so of drive time and to ensure a close parking spot.  I drove up with my neighbor, Bill, a fellow runner.  We made a quick run to the porta-pots and headed back to wait in the car until it was closer to race time.

Almost everyone with a race bib was also dressed in green.  It was fun seeing all the fun costumes, stockings, tutus and kilts...not to mention various hats and wigs. 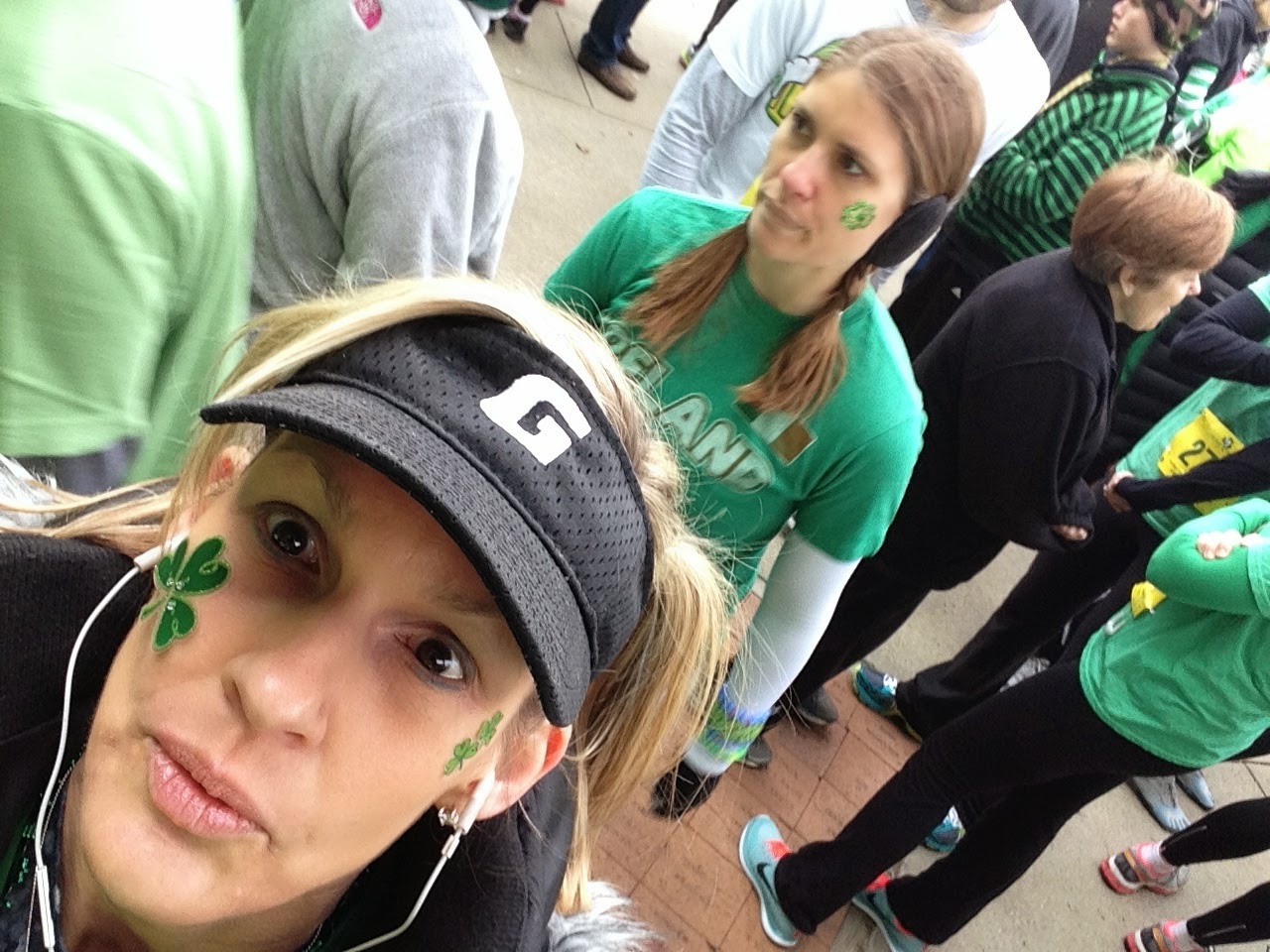 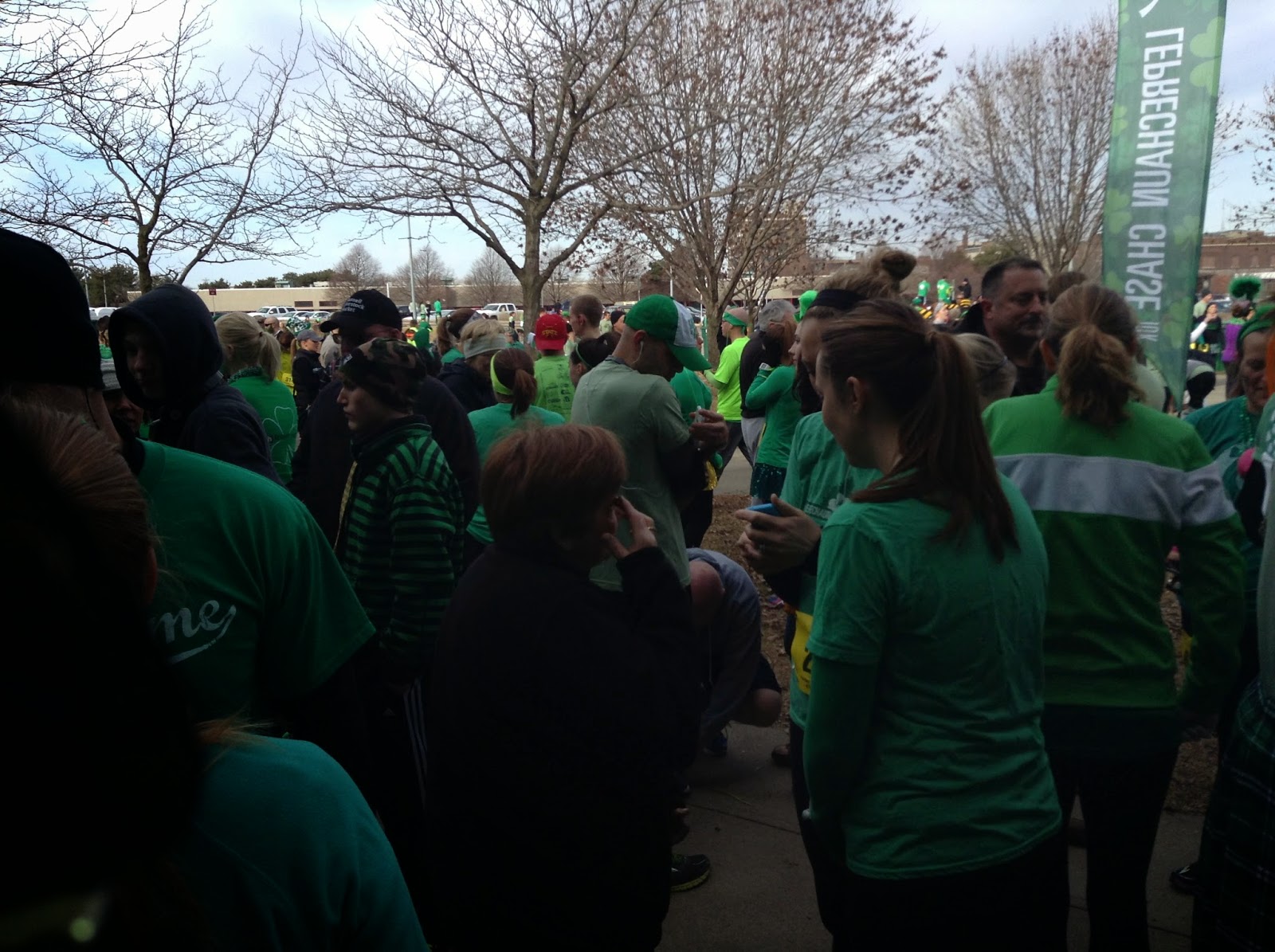 We had less than ideal weather for this grand event, though.  The temps were in the 40's, but the sunshine was spotty and the wind most severe.  I debated about wearing the puffer vest or going without...and decided moments before the gun went off to just wear it.  I did get hot a few times, but for the most part I was comfortable. 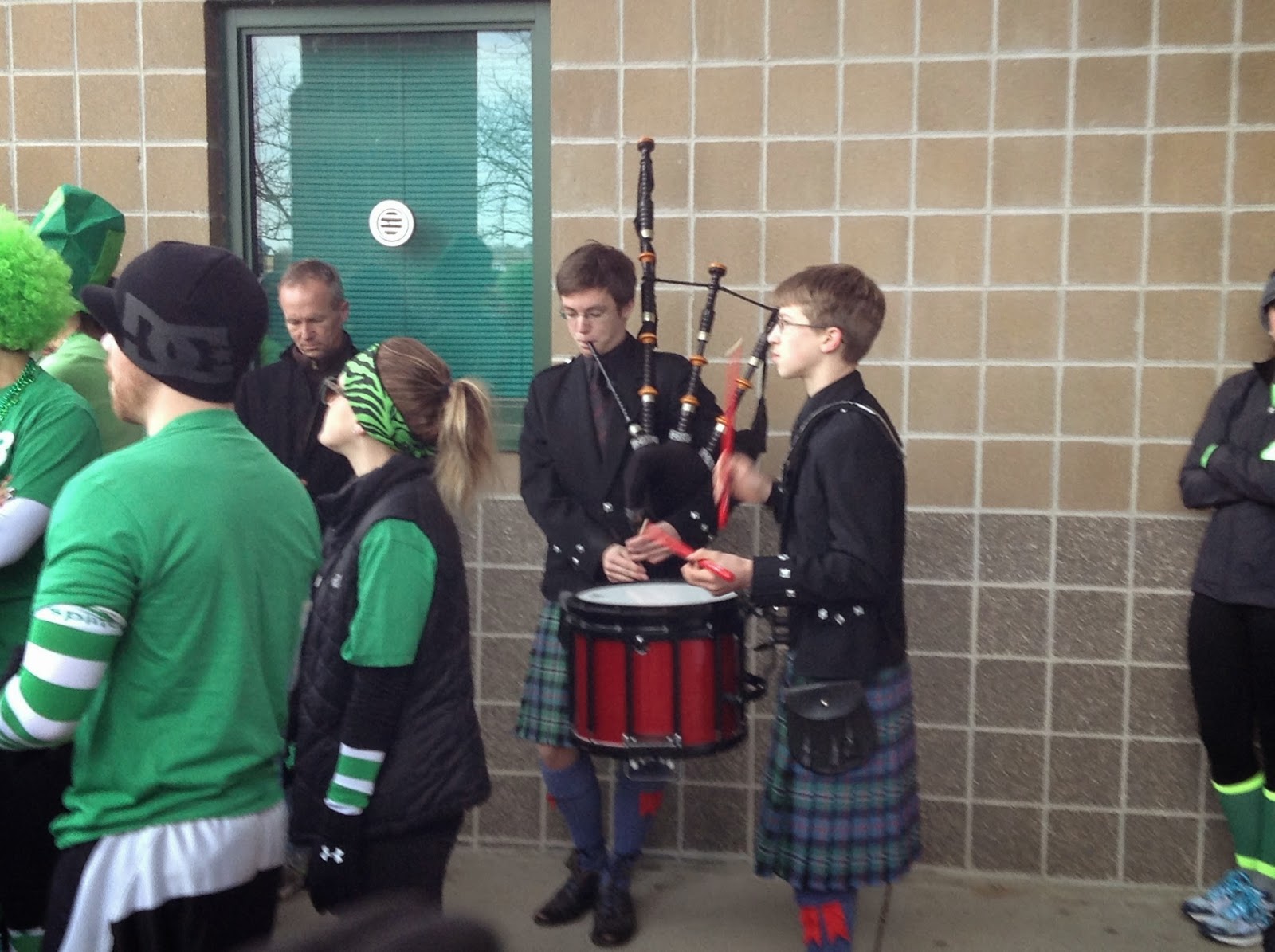 Just prior to the start of the race, we heard bagpipes playing, and discovered it was a family from our hometown of Grinnell!  They have a local band, Turlach Ur, and they make appearances at various events in our area.

As I crossed the start line, almost immediately I felt that weird little sensation that I should have used the bathroom one last time.  Oh well, this was only a 10K.  I probably would be alright.  I hadn't had a lot of water that morning, and it had been a few hours since I'd eaten.  As soon as the thought of food crossed my mind, I realized that I was feeling a little hungry, too.  Great.  Not even half of a mile into this race and I was already creating "what if" scenarios in my mind.

It didn't help that I also had run the day prior.  It had been my birthday and, as was customary for me, I did a 3.14 mile run in honor of Pi Day.  Usually a 3-mile run is not a big deal for me, but it was late in the day and also in some pretty strong wind.  My hamstrings were feeling a little stiff, and I was banking on them loosening up during the first couple miles of the Chase.

As I approached the 2-mile mark, that "hoping to find a bathroom" feeling had not gone away, nor had the hunger. I made it to the water station in about 17 minutes, which is typically a little fast for me (especially in the early miles of a run).  It wasn't too long before the first Lad passed me, followed by several more Lads a short while later.

I was really glad we had sunshine, even if it was intermittent.  The wind was pretty strong, but it was mostly at my back...until around mile 3, when we were headed around the north shore of Grey's Lake. My vest was keeping me warm, but the zipper kept sliding down (probably from the wind).  Then I noticed a strange little "side-effect" of the tutu.....it was creeping down between my legs!  Seriously?  (I could only imagine what that looked like from behind) So, by then I not only needed a plumbing intervention and my stomach was growling (I could hear it over my music), but I also had to keep reaching down periodically and drag the tutu fragments out from where they shouldn't have been.  I did manage to laugh at the humor of my situation, though.  Getting annoyed and uptight would serve no purpose anyways.

As we rounded the lake, I could see the public restroom up just beyond the 4-mile mark.  Knowing it would mess up my finish time, I made the command decision to just veer off course and head towards it.  I glanced at my watch, and noted the time so I'd have an idea of what my actual "running" time would be.  Another lesson learned....it's best to have all this restroom business done BEFORE the tutu goes on your body, because it's pretty crowded in the stall of a restroom.  Just saying.

Pit stop done, I headed back to the course.  I had lost about 7 minutes of race time (actually, technically, those 7 minutes were added), and I was back in the running.  The final two miles were straight into the wind, but also in the sunshine.  My legs had loosened up some, and I was able to run about a 9-minute pace for the remainder of the race.  There were a couple times I considered walking, since I already knew my finish time was whacked, but I knew I'd get out of the wind that much quicker if I just kept running.

I crossed the finish line in 1:01:15.  Subtracting off the 7 "pit stop" minutes put my run time around 54 minutes, which is just under a 9-minute pace.  I seem to average between 8:30-9:00 minute miles, so I'm content with that.  Given the fact I had run the day prior, battled wind both days, and also had done the Fight for Air Climb in Chicago (180 flights of stair racing)  6-days prior......this was a small victory for me.  It turns out, the gal who finished third place in my age group was actually a little behind that with her finish time, so I coulda/woulda/shoulda have placed.  Oh well.  Maybe next time.

Bottom line, this was a fun event.  It's neat going to a race where almost every participant is "actively" participating.  I love running, and I love bettering my finish times, but not every race has to be a competitive race.  Sometimes it's fun to run just for the sake of running itself.  And if you can do it in a tutu, all the better.