(Another) Fight for Air Climb in Des Moines 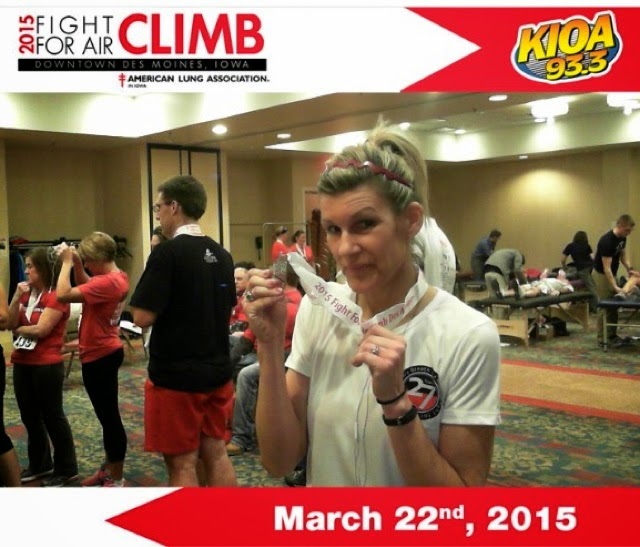 This event just gets better every year. It's a physically demanding, it's hot, and it's difficult. And I seriously love every moment of it!

The Fight for Air Climb is affiliated with The American Lung Association. It's a national event that has venues in 65 cities throughout the United States. This was my fourth Climb. I did the Des Moines Climb in 2013 and 2014, and did the Chicago Climb  in 2014 as well.

I routinely do a lot of stair-climbing for cross-training, and didn't do any "specialized" training for the Climb this year. In years past, I would do extra sets of 100 doubles (taking the stairs by two's) or 50 triples (taking the stairs by three's) in order to prep my body for the event. Since I've been doing a lot more lower-body cross-training (and yoga) in recent months, I didn't feel the need to do anything different.


This year, a fourth building (the Ruan Center) was added to the Des Moines venue, increasing the number of flights of stairs from 61 to 93. I wasn't worried about the extra building being added; in fact, I welcomed the challenge. I knew what it felt like to climb the 61 flights of the other three buildings, and after doing the 180 flights in the Chicago climb last year, I knew I could do it.


All participants have the option of climbing one, two, three or all four buildings, but they have to climb the buildings in sequence. The first building was the EMC Insurance Companies Building, which has 15 flights of double stairways (each flight is split...8 or 9 steps up in one direction, then 8 or 9 steps in the other) between floors. The second building was the Hub Tower, containing 18 flights (also split stairways). The third building (the "new" building added to the event this year) was the Ruan Center, bringing with it 32 (count 'em, 32!) flights of stairs (split stairways also). The final building was the Des Moines Downtown Marriott (the host site), which had 28 flights of stairs (the first couple flights are split stairways, and the remainder flights are single stairs of 12 steps, with a landing to walk/run around and continue up directly over the previous flights). All of these buildings are connected by the Des Moines Skywalk system (and are in very close proximity to each other), so the entire event is indoors.


I am always amazed at how well this event is organized. There were upwards of 1200 people who climbed this year, raising over $246,315 for the American Lung Association. All participants are required to raise a minimum of $100 (in addition to the registration fee). The event is chip-timed, and participants receive a tech shirt, plentiful food, and a medal at the finish line. Returning climbers receive an alumni pin (for their 2nd, 5th, and 10th years), and also can get an "I Beat My Time" ribbon if they climb with a faster time than in previous years.

My first year, I did the Climb on my own. This year (and last year) I was part of a team, Team 27. The team was formed in honor of Tom Muselman, a Des Moines area banker, who was the recipient of a double lung transplant in 2009. Team 27 is, hands down, the biggest team at the event. This year, there were over 100 members from Team 27 climbing the stairs (raising over $33,008), including Tom himself!


Unlike a road race, where everyone starts at the same time with a gunshot, The Fight for Air Climb has all of the climbers assigned to waves. After all, it would be a fire hazard to have everyone in the stairways at the same time. As each wave is called, the climbers line up and are escorted to the first staircase. The climbers are allowed to start in (approximate) 10-second intervals.

It's incredible being there. As we were escorted to the first building, there were numerous volunteers in the skywalk, all of them cheering for us (and we hadn't even started climbing yet). The first building always seems to go great for me...at least the first 10 flights or so. I usually start out taking the steps by two's, and going fairly fast. By the time I've reached the 10th floor, though, I can feel gravity taking over. I was able to continue taking the steps by two's, but needed to slow down. My quads felt strained, my throat dry, and my breathing labored. I made it to the top floor. Volunteers were clapping, some were high-5'ing us. I grabbed a cup of water and followed the arrows to the elevator. As I waited for my turn to head down, I was reminded how tough this challenge really is. Not only on my legs, but also for my lungs.

Once off the elevator, volunteers were waiting to direct us through the skywalk to the next building. Some Fight for Air Climb venues take place in a single building (in cities that have actual skyscraper-height buildings). An advantage to having the total number of flights divided amongst more than one building is that you can catch your breath in between the buildings. If the climbers did the 93 flights of continuous stairs, they'd have much slower finish times (the timing chips are activated through the doorway(s) as you enter and leave the stairwells).

The second building went well. I had written out my finish times from each of the buildings from previous years, so I knew I was on track to at least finish the "old" buildings faster than last year. Before I knew it, it was time to climb the "new" building. This building had the most floors, and Ashley (who had climbed earlier in the morning) had warned me this was the toughest of the four buildings.

As mentioned, the third building had 32 flights of stairs...and all of the stairways were divided, meaning it felt  like we were climbing 64 flights!  My forehead was sweaty, my back was damp, and by mouth was extremely dry. There were a few water stations along the way to the top, and numerous volunteers in several of the doorways cheering. There were motivational posters on almost every landing, as well, which were just like the ones you see along a race course.

As I was nearing the top, I passed a kid on the steps. He had paused, and was trying to catch his breath. I asked if he was feeling alright, and he said he was good. He got up and followed a few steps behind me. A short while later, he noticed my "In Honor Of" bib had fallen off and grabbed it and stuck it back onto my back (the bib soon thereafter disappeared...I should have pinned it on. #mybad). Finally, I reached the top and exited the stairwell.


Whew! I grabbed a couple cups of water and took my time walking to the elevator. All of the others waiting for the elevator weren't standing, but leaning against the wall.

Finally, the fourth building. This building is where I've really rocked the last two years. It's probably due to the fact that I've gotten warmed up, most of the stairs are a single straight-away (no pausing to constantly change direction on divided stairways), and this stairwell is located on the outer edge of the building (rather on the interior), so it's much cooler. Case in point, I climbed the 28 flights in 5:30 (2:17 minutes faster than the 32 flights of the third building).

All of us on the elevator down were talking about how difficult the third building had been. Conquering that third building felt pretty incredible,though. If this was an easy challenge, everyone would be doing it. And it wouldn't mean as much for having climbed it.

The volunteers really make you feel like an Olympic athlete. As we left the elevator, we were greeted by a continuous row of people clapping, cheering, and high-5'ing us as we made our way back to party central. We were given our medals and some received Alumni pins. All of us were handed towels, and all of us gladly used them to wipe off our sweaty faces. My finish time on my watch said 20:45, and I was satisfied with that. I had climbed the three buildings in 13:58 (2013) and 12:43 (2014), and I knew my time would reflect the fourth building this year.


I met back up with the family, and grabbed some water. As we were heading out, I stopped by the results table, and got my printout. It wasn't until we were in the car, driving away, that I realized  my official time was 20:26!  Subtracting out the 7:30 from the third building actually gave me a time of 12:39...which was faster than last year!  Had I figured that out before leaving the premises, I could have gotten an "I Beat My Time" ribbon. Oh well. The satisfaction in knowing I have climbed faster every year is good enough. Some of my stats: There were 808 participants who climbed all four buildings, for a total 93 flights of stairs. I finished 215th, which was good enough for placing 4th out of the 33 women in my age group. The gal (in my age group) who got first place climbed the four buildings in 18:02. The second place gal (19:59), the 3rd place gal (20:14) as well as the 5th place gal (20:43) were all in pretty close competition with myself (20:26). I got stuck briefly behind three gals in the first building (who were all within a couple steps of each other, making it difficult to pass them), and I did pause a few times to take some pics in the third building....so that could have been the 12 seconds difference between the myself and the 3rd place gal. Oh well, it's not my first 4th place finish, and probably will not be my last. Myself and these other gals all climbed at different times...so none of us were in a heated race at the same moment in time.

I totally love this event because it's so challenging. There's also a Law Enforcement Challenge and a Fire Fighter Challenge...and seeing those climbers in all their gear is quite impressive and humbling. The entire crowd gave them a standing ovation as they lined up and left for their turn on the steps. Have you ever participated in a stair-climb race? Are you a Fight for Air alumni climber? I'd love to hear your story!