Getting Chased (and Passed) by the Lads 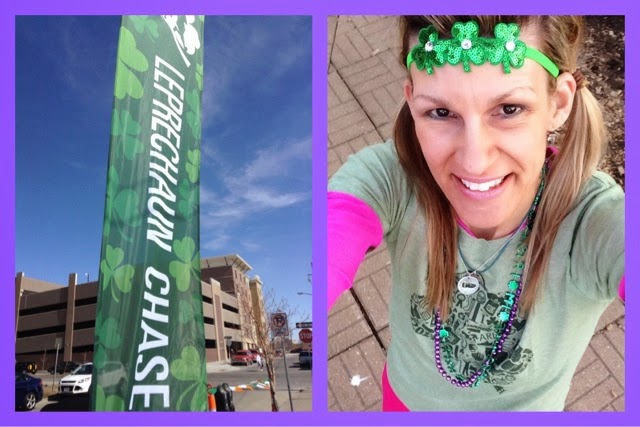 Ever been chased by a Lad? I have been!  Even with a 5-minute head start, myself and fellow Lasses couldn't hold our ground. The Lads passed us and won the race, earning all of their fellow Lads a complimentary green beer.

Follow that? I'm talking about the Leprechaun Chase, a 10K race that happened on Saturday in Des Moines. This was the event's third year (there's also a Chase in Omaha, sponsored by the same organization, that was held the weekend prior). What makes this event so unique, is that the girls (the Lasses) get a 5-minute lead before the the guys (the Lads) cross the start line. I ran this race last year, and (despite last years wind & somewhat chilly temps) I wanted to comeback and try for a faster finish time...and this year, it was held on my birthday. So, yeah. It's not everyday my birthday falls on a Saturday, let alone the same day as a race.

Several of us were on a team, the Grinnell Lads and Lasses. I rode up with Barb and Bill, and we met up with some of the others prior to the start of the race. The weather was absolutely beautiful!  It was in the mid-40's or so (with some wind out of the north) prior to race time, but almost 60-degrees when we headed to the post-race party. 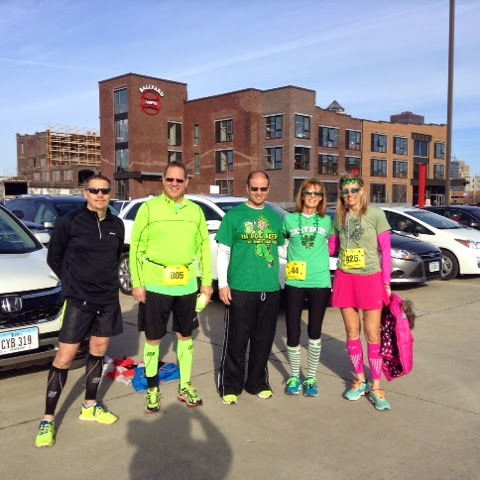 Race time wasn't until 10:00, and we arrived with plenty of time to secure a close parking spot and take our time prepping for race. There were no lines for the porta pots, so we did our business, took some pics and walked around. It was another one of those "tricky temperature" situations, though. I was dressed in a running skirt, calf sleeves, and a long-sleeved top layered under last year's event shirt. I also had a puffer vest along, and debated (briefly) about wearing it because it felt pretty cold with the wind. Last year, it was colder and windier, and (at the last minute) I elected to wear a vest over my clothing. I was not over-heated, but I would have been fine without it. So, I made the command decision to go without the vest this year.


Before we knew it, it was time to line to up (the Lasses and Lads in their respective lanes). The National Anthem was played, and the Lasses were off! Barb and I hung together for most of the first mile, but I was already feeling some nagging piriformis tightness. Usually, it loosens up after the first few miles...so I took a gamble and tried to stay with the gals towards the front of the pack (BIG mistake). Also, I didn't warm up much, so it felt like I really had to force my left leg to propel forward (seriously, this was not my first race, apparently I need to relearn this warming-up lesson).  In defense of my lack of proper warming up, though, I have had several good runs lately, with minimal (if any) stiffness....so I (optimistically) thought all would be well.

Also, I probably should mention the GPS fail with the new watch. It's no secret I'm very challenged with my technology skills and expertise (or lack there of). I've had this watch only a few days, so I have not had much opportunity to figure out the bells and whistles. I got the GPS secured on it right before we lined up. Upon the count-down, I noticed it said "No GPS," so in a split second of panic, I started pushing buttons...and I tried backing out of the current menu so I could start over...nothing was happening...I pushed a few more buttons....still nothing....so I settled on just utilizing the stopwatch function (I've never been one to worry about my on-going pace stats anyways). As I was crossing the mat at the start line, I hit what I thought was the start button on the watch...and the current time of day appeared....What? Where was the stop watch?  So.....needless to say, I did not have the "stop watch" function to accompany me on this race. Worse things have happened. I used the "regular watch" time to monitor my pace at the mile markers....not ideal, but it worked.

Anyways, the first mile was tough. I could feel Barb had inched slightly ahead of me, and I could feel myself plateauing. I glanced at my watch at the first mile mark, and it said 10:08 (not sure what the seconds were)...which kind of surprised me. I knew I started out too fast, but with all the extra effort it was taking to keep my body moving I didn't expect to be running an 8-minute pace (that doesn't happen until a few miles into a race, if at all). I tried to slow down some, but it was difficult with all the fast Lasses along beside me. The first mile was also pretty cold, we were running west and that north wind was chilly!

I spotted the first of the speedy Lads about halfway between miles 1 and 2, as I was coming back from a short turn-around. They passed me just before the second mile mark, and my watch was showing 10:17...so my pace had slowed somewhat, but still was well under a 9-minute pace. I was running much faster than what it felt, given the constant tightness of my posterior. Shortly after the 2-mile mark, we turned onto Martin Luther King, Jr. Parkway and were headed south, towards Grays Lake. Ah, what bliss to have the wind (finally) at my back.

This part of the course took us into Grays Lake Park, and around Grays Lake itself. I have done several different races in Des Moines, and a lot of them utilize this very route in one capacity or another. I made it to the 3-mile mark (secretly a little relieved to be almost halfway done), and my watch still showed my pace was keeping steady (and still under a 9-minute pace). But the tightness was still there. It was easing up, but the stiffness persisted. The weather was felt much warmer, though, and the wind was somewhat sheltered from us. I was pretty thankful to have left the puffer vest in the car.

I made it to the 4-mile mark, still somewhat in pain and still amazed that I had been able to keep my pace steady. I had forgotten to look up my finish time from last year, but had hoped to set a PR this year. It would be great to set a new 10K PR, but given the circumstances with my piriformis issues on race day...well, the odds were pretty high that would not be happening.

The fifth mile was straight east, into the sunshine. and along a brief segment of the Des Moines River. I did a lot of thinking during those final miles. It's frustrating to have these aches and pains, even after easing up on my mileage over the winter. Granted, the aches and pains are not there for every run (and most times are not so severe), but they make my race more challenging and difficult in comparison with all the others who are pain-free on race day.  But, alas, this is what I have to deal with at the current state of my running and racing. Things could, indeed, be so much worse. I am mindful of all the good things that come from facing challenges...the main one being that I do not take any of the "easy" runs or races for granted.

So, onward!  As I was rounding the last corner right before the finish line, I spotted Barb and she spotted me. She clapped and cheered for me, and told me to "finish strong!" So I did. Truthfully, that entire final mile felt better than the previous five. Wouldn't it be great if we could run each mile as if it were our last? I glanced at the clock as I crossed the mat, and it read 54:57. Not my fastest 10K, but better than I was expecting to finish.  I immediately needed a few minutes to massage some of the tightness away, and a few easy stretches to loosen things up. Those first few steps always feel a little awkward, and stopping at the porta pots does not help.


With the race over, Barb and I met up with the rest of our friends. More pics, and then suddenly everyone burst into a chorus of "Happy Birthday." Wow. That was unexpected, but such a nice feel-good gesture. Did I mention it was my birthday?  Or that I LOVE my runner friends?


Some of us stuck around and went to the post-race party for awhile. After all, the Lads in our midst had earned a free green beer. Also, we received our printouts from the race...and Barb had placed third in her age group!  So, a celebration was in order at the awards ceremony!


We hung out for awhile at the party and chatted about running, training, and upcoming races. We also made plans for future races and get-togethers. After all, isn't that what runners do when they meet other runners at post-race parties?

Upon returning to town, Barb and I took a minute to change clothes...then headed out for another 3.14 miles, in honor of Pi Day. It's become a birthday tradition for me to run 3.14 miles on my birthday each year. I was honored to have a friend join me. The 3.14 miles felt a little stiff (don't forget, it had been a few hours since we'd run the 10K, spent time at the party, and then the hour-long car ride home). But I played with the new watch and got the GPS feature to work this time. Maybe there's hope for me with technology gadgets after all.


The 2015 Leprechaun Chase was a fun event, even with the muscle tightness and frustrations. It's fun being with friends and doing what we love together. Celebrating each others' accomplishments is just an added bonus. My official finish time wound up being 54:42...which is a course PR for me. Not a new 10K PR, but a decent finish time none-the-less. I  placed 8th out of the 46 other gals in my age group, 124th out of the 740 women who raced, and 339 out of the 1131 total people. I'm good with that. I know I'm capable of doing better, especially under different circumstances, so I'm OK with not doing "better" every single time I run. Life is good.

Have you ever done a St. Patrick's Day-themed race? Ever dressed in costume? Do you ever struggle with technology? 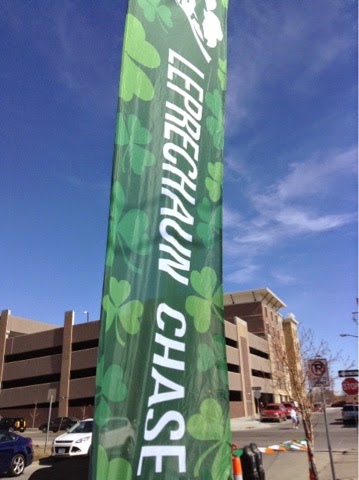