Well, another week with not a lot of (running) action, but all is good.

Seriously. I may be a runner, but there are other ways to stay fit, active, and in motion.This week's theme: Hills. Heat. Humidity. Ugh.

For example, Monday was a short day at the office for me. I worked until noon, and had the afternoon to myself. I mounted the Mongoose (I really need to give it a name...Mongy? Mongie? Goosie? ), and set out for a ride.  Mind you, the temps were pretty warm and there was a 'gentle" breeze, so I naively waited until mid-afternoon to begin this endeavor.
I have never used my GPS watch for anything other than running, but I wore it for this ride to track my mileage and splits. The first two miles were in the city limits, the third mile took me to the far edge of town, and miles 4-9 were on the open road. Things went well until right before my turn-around. A pickup passed me with a huge 2x4 (?) in the bed, flopping and bouncing...a short ways later (like a mere 100 feet!), the board flew out of the truck and landed in a heap on the shoulder. Ummmm....had that happened a mere 100 yards earlier, that board would have landed on me! The dude pulled over, and I passed him as he was retrieving his lost board. A minute later, he passed me again, with that same board flopping and bouncing....so I hastily made my turn-around and headed back to town. What an idiot (the dude, not me).

My ride all went downhill (NOT literally) from there. As soon as I turned around (and was then going west), I was met with a fierce NW wind that I would have to battle for the next several miles until I got back to the main road (and would be able to turn and go north). Ugh. This road has a few mild, rolling hills...but they feel pretty steep and wicked when coupled with that angry headwind in the heat of the day. Le's' just say there was no coasting permitted and it felt like I was pedaling in place.

I made it back to the main road, and made my turn.....only the wind felt even worse as I headed north (What the WHAT?). Once I made it back to the city limits, it got better....but not much. At least I had some shade for the final two miles, but I was beat. I truly felt like I had just finished a tough foot race. I got back to my house and promptly went inside and grabbed more water (I had drained my 20oz. water bottle from my bike holster). Then I realized it was Monday....and in keeping with my #nevermissaMonday I had that 1-miler looming over my head. Granted, the world would not have ended had I skipped the run, but a brief 1-mile run is not too much to do (even with tired legs from a tough bike ride). So, after a quick water break, I headed back out and ran my mile, slowly.

And then I stopped, dropped, and knocked out some push-ups as well.

Not much on Tuesday, except for some planking and push-ups. I was still feeling pretty worn-out from that crazy bike ride (and near-death experience).

Wednesday,we were plagued (again) with hot and humid weather. Seriously, Momma N, can you cut us a break? Pretty please? Granted, I have chosen to live in a place that has extreme weather, but a periodic cool day would be appreciated. (rant over)

Anyways, I waited until the evening hours to go running. Although I have been honoring the Respect The Recovery thing, I still want (and need) to log a few miles. I headed out around 8:00PM, not sure how far I should go. I decided to do my usual 5K route and, depending on how I felt, I could call it good or run a few more miles. The temps were still very hot and humid. Ugh (have I said that before?).

The wonky heel held up fine, but the chic side-pony tail? Not so much. There was a bit of stiffness in the first mile, but that all was minimized shortly thereafter. I finished the three miles and decided to be done. My heel felt fine, and I didn't want to overdo it.

Thursday was a full day at the office, and the evening roster included moving the recent college graduate out of her apartment. Cross-training at it's finest! Dresser squats (check). Sofa lunges (done). Loveseat dips (ditto). Mattress/boxprings hoists (double ditto). And, let's not forget numerous stair climbs in between each set. There may have been a plank (or several) when we were all done.
Friday was a true day of rest. My work day ended at noon, and I went with the oldest daughter to her followup appointment with the oral surgeon (wisdom teeth extraction a week prior). We also may have gotten pedicures. I'm pretty diligent about pampering my feet at home, but it's nice to sit back and have someone else do it for you once in awhile. On a funny note, the daughter was the one who got asked if she was a runner...not me LOL (apparently, I'm doing a good job on my own with the pedi-maintenance).

Saturday, I had plans to do a somewhat long run. The problem is, all of my late nights caught up with me and bit my tired buttocks that morning. I over-snoozed, and didn't find my way out of the confines of my mattress until after 8:30. Yikes. After the requisite chai latte' (and morning plank), I was able to finally get myself out the door just before 10:00.

Ugh, it was hot and humid. My ultimate goal was eight miles, but I decided on a five-mile route, loop back to my house for a water break, and (depending on how I was feeling), I could do a few more miles or call it good. The heel felt a bit stiff, but that was only for a short while. I made it through the first few miles and felt good, despite the weather. I did pause a few times to wipe my face with my (already) saturated shirt.

By the time I was nearing the end of the fifth mile, I knew this would be it. I really should have gotten up and out the door at least three hours prior. I walked a few more times in that final mile, and decided to white flag it. I would not be doing myself any favors by pressing on in the heat with my already compromised form and gait. I was pleasantly surprised to see the stats for my splits...10:19, 10;41, 10;41, 10:45 and 11:23. Not bad for running easy and "simply" by feel.  (I also went for an hour-long bike ride later in the evening).

I have been craving a "sunrise" run forever, so I had every intention to rise and shine early on Sunday morning. Except Momma N (again) decided to play with my plans (and my mind) and gave us some major rainfall and storms at 5:00AM. Seriously. When I finally got up, around 7:30, all was calm outside and I was able to get dressed and out the door by 8:15.

But, ugh. Even though the temps were a bit cooler, the humidity was still over the top. My plans were to only do a simple 5K, so it was not a big deal. My heel felt fine (I could really get used to this!), and I took it slow and easy and enjoyed the scenery. In my opinion, any run outside trumps a run inside on the 'mill. Although I was a major hot and sweaty mess (again!), I was happy and thankful to be outside, starting my day in my running shoes.

My heel has been feeling good! I'm taping the arch/heel periodically, and wearing my "comfy" shoes more often than my "pretty sandals." I'm also treating the tape as a fashion accessory...why not?

The planking and push-up challenge continues. Although Max thinks he's my coach, he doesn't get the concept of the timer on my phone.


And the first rose bloom of the season has graced my garden! 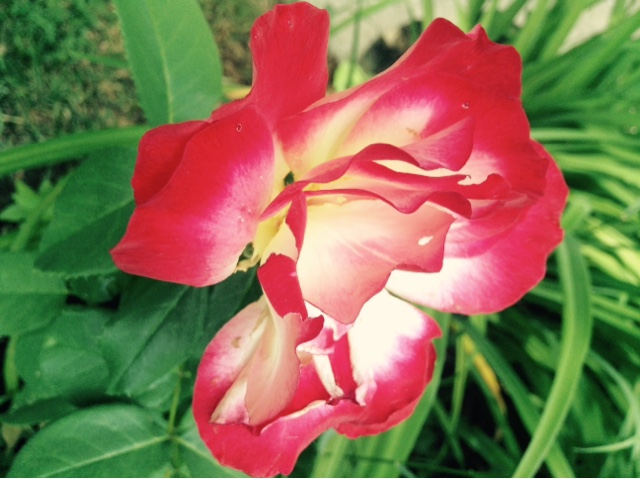 What do you think...should I give my bike a name? Any suggestions? How's your weather? Pedicures...do you do them yourself or let someone else pamper you?

As always, I'm linking up with my gals Holly from HoHo Runs and Tricia from MissSippiPiddlin  for the Weekly Wrap. Do head over, check out their blogs as well as all the other blogs there. You will not be disappointed!