Not Rushing the Recovery

Another week spent in recovery mode, and I'm pretty proud how well it went for me. Theme? I'm going with, "Not Rushing the Recovery."


There were not many miles in the running shoes this past week, and I'm quite alright with that. After doing back-to-back half marathons (Dam to Dam on June 4th and Grinnell Games on June 11th), my wonky heel was ready for some down time. Oddly, it actually was less "achy-breaky" after the second race than it was following the first one (no complaints on that paradox). None the less, I had absolutely nothing to gain (and further injury at bay) if I didn't give it some rest.

Monday, I decided to head to the lake and do an easy mile on the trail. So far, I'm batting 1000 on my #nevermissaMonday's. The weather was balmy and there was not much of a breeze. I rode my bike out there, ran a lap and decided to walk another...and half way around the lake, it started to rain. Ha! I probably could have run the remainder of that second lap, but the rain actually felt refreshing (and I was already wet from sweat).
Tuesday, not much to report, but I did stay active with planks and push-ups. The planks are a daily occurrence anyways, but it's been a fun challenge adding 20-40 daily push-ups to the mix. I have done other push-up challenges before, but this time I can really see and feel a difference in my form. I'm actually doing them in increments of 10-20, which allows me to go much deeper because my arms/chest don't get as fatigued as when I'm trying to knock out 40+ at a time.

Also, since the foot was feeling so good, I tore off the sports tape and felt a huge surge of freedom and liberation. I am still taping the heel (and arch) periodically, as a means of maintenance/prevention, but I don't think I need the support 24/7 anymore. Stay tuned...that may change.

Wednesday, my heel was feeling (almost) fully recovered. My work day ended around lunch time, so I mounted the Mongoose and went for an hour-long ride. I rode out south of town in the mid-afternoon, so the temps were pretty warm. All felt great until I turned around and was hit with a fierce head-on wind for most of the return trip. UGH. As flat as Iowa seems, that blasted wind makes it feel like anything but flat. Trust me, there was ZERO coasting until the final mile or so when I was back in town and had some wind (and sun) relief.

Later, I met up with my friend, Barb, and we ran a couple easy miles.The heel felt a little stiff for the first mile or so, then I could tell it was loosening up...but I decided to call it good at two miles and not force it.

Thursday, I decided it was time to test the waters and wear some different shoes (aka-pretty sandals!!) to work. I'm a color gal, and I like my funky summer sandals. Although my Alegria's and Oofoos are extremely comfortable, I was bored out my mind wearing the same shoes almost every day for the past three weeks. The experiment was deemed a success, and my heel felt fine. I do plan to continue wearing the "comfort shoes" intermittently, though, to keep up with the TLC for my still-recovering foot. Even though my heel is feeling much better, I realize it probably still has some additional recovering to do.

Friday morning started on the floor, doing my daily (morning) 2:30 plank. I didn't have much else on the roster (other than an easy hour-long bike ride), so I decided to knock out another plank... and was able to hold it for 5 minutes. I routinely do 5-minute planks (all in the same, continuous position), but it had been a few weeks since I'd done the last one. I don't do the long, extended planks very often, but once in awhile it's fun to stop, drop, and see if I still got it in me.

Saturday, Barb and I met up to do a semi-long run. Although my heel had been feeling good, I was a little hesitant to go too far, We decided on five miles. The heel felt a little stiff and "off" for most of the run, but was feeling better by the time we finished. Again, I probably could have pressed on and done another couple miles...but there was nothing to gain by doing so.

So, how am I feeling? For the most part, all is well. My heel feels better, but still has some residual stiffness and occasional discomfort first thing in the morning. Although it definitely feels like it's on the road to recovery, I suspect I will be dealing with some (minimal) discomfort for several months. Don't forget, I have that 12-hour Ultra happening in four weeks (YIKES), and shortly after that, I will be diving into training mode for the Route 66 Marathon. I need to take things easy now to ensure all of these other things will happen (with minimal problems) later. In short, I still consider myself to be in recovery mode (and here's how I'm coping: Recovery tips ).

The red lilies were showing signs of blooming "any day now..." 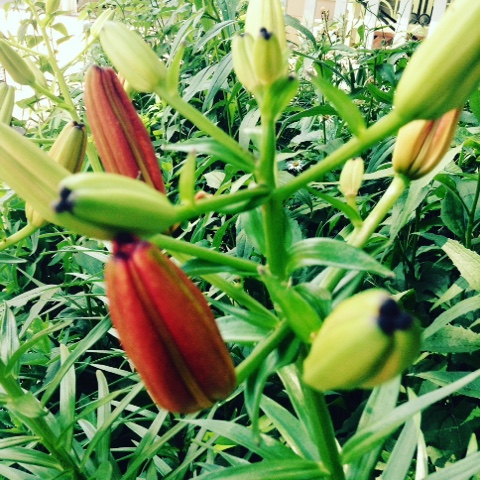 I have seen much improvement with my push-ups!

Max is my noon-time walking companion. Technically, I'm the one taking HIM for the walk...but I let him think otherwise.

And, I'm so thankful for the wonderful role model my father has been (and continues to be) in my life. Happy Father's Day to him and all dads everywhere!!

Have you ever dealt with injury and had to resist the temptation and NOT run? Any biking happening for you? Planks? Push-ups? Favorite summer flowers in bloom?

As usual, I'm linking up with the lovely ladies, Holly (from HoHo Runs ) and Tricia (from MissSippiPiddlin ) for the Weekly Wrap. Please, head over and check out their great blogs and while you're there, read the other blogs as well.