I named her 'Milly

Ironically, we didn't have much in the way of snow, but we did have single-digit temps everyday with sub-ZERO "feels like" conditions (factoring in the ever-present wind).  So, yeah. In keeping with my January goals, I did all of my #30minutesofdailycardio inside.

Any guesses what that entailed? If you guessed time on the 'mill, you're correct. We've had our treadmill for many years, like since 2001 (?). She's almost like family (and I use that term of endearment quite loosely).....but she's never had a name, so I named her 'Milly.

Let's just say 'Milly and I have been spending a lot of time together recently.For example:

On Monday, not only did I introduce her to #nevermissaMonday, but she also did my 30 minutes of cardio (power walking) with me. I did my 1-mile run and then off the watch the University of Iowa Hawkeyes (it seemed like a good idea at the time).

On Tuesday, we did more power walking together, although I wasn't good company (I was deep in concentration, reading a book).

Wednesday, we did more power walking...again, I did the book thing, and later, listened to my music for the cool-down.

Thursday, I set her incline on 2, and powered through three (progressive) miles of running.

On Friday, we spent some time together in the afternoon, but I wasn't very good company (again, that darn book suckled me in and I was oblivious to my surroundings for 30+ minutes).

Saturday, my achy-breaky back was not being very user-friendly. We had a busy day on tap, and I only had 20 minutes of available time before we loaded the car and road-tripped three hours down the road to our son's swim meet. I had hoped to rise and shine early, but I dozed back to sleep. I also was hoping to get in a 3-4 mile run, but I opted to postpone the run until we returned home.

Our son is a sophomore at Iowa Central Community College, and this is his second year on the men's swim team. He plans on transferring to a 4-year college in the fall, so this is his last year of swimming. It's gonna be strange to see this come to an end... but he'll need more time for his studies, nor does he want the commitment of a sport at a division-1 school (and there's a very high probablity he wouldn't qualify for a spot on the team anyways).

We didn't get back home until almost 9:00PM, and I debated about just blowing off the run that I had postponed 12 hours prior....but, (spoiler alert!), I changed clothes and got it done. Well, I only did two miles (instead of the 3-4 miles I'd planned to do), but I was content. After all, it's my off-season. By the way, I have a new favorite hashtag: #itsmyoffseason (and I've used it profusely this past week)


Sunday arrived. The temps were STILL sub-freezing (and I had a difficult time pulling the blankets back and getting out of bed). I waited until after lunch to lace up the shoes, and decided to take it outside. I was in desperate need of fresh air! But, UGH! I think some of those nasty weather conditions that caused some distress in the south were blowing my way (that SE wind was wicked!). My 3-mile route started with an east-bound jaunt, then turned for another half mile (going due south)....and it was all I could do to stay vertical and keep my buff in position over my nose and mouth. Finally, the final mile or so (going west, and then north for a short ways) brought me some relief.

So, my first week of 2017 kept me active every day, but only running four days (M,Th, Sat and Sun)....and that was perfectly fine with me. It's my off-season, after all (Have I already said that?).

I'm having fun with my yarn....I knocked out another "topless beanie" this week, and have another in the works.

And, the new 'do? I'm loving it! I kind of miss having the messy bun option (for last-minute styling situations), but with this new style, I haven't really needed an emergency go-to solution. All is well.

And, let's not forget the #Fridayfashion post. Are you following me in Instagram (@runningonthefly)? Come along, join the party! Post your Friday outfit and tag me! I LOVE to see what everyone is wearing!

So, that's a wrap! In case you missed some of my posts from last week, they're here: 2017: Focusing on FUN and Let's Talk about my Off-Season.

And these are my daily goals for January: 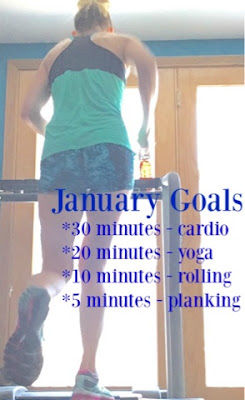 As always, I'm linking up with the amazing Holly at HoHo Runs and Tricia at MissSippiPiddlin for the Weekly Wrap. This "little" get-together is such a fun way to stay in touch with everyone! Head over, check out the hostesses' blogs, and read some (or several) of the linked blogs as well.