It was another week (mostly) inside.

How does that grab you? The good old Iowa weather has kept me inside far more than I'd like this winter. Seriously, Momma N...what's up?  I ranted and runfessed about it recently (post is HERE), and it's really been a buzz kill to my mental well-being.

For example, it was (again) cold. The wind continued to blow with gusto, and the air felt damp (which  makes it feel even more frigid). Also, I came back from my little Chicago extravaganza with a full-blown head cold and Richter scale-worthy cough. So, yeah, I elected to just #optinsideagain to give all the gunk the best chance of vacating the comfy confines of my persona.

Monday, I spent more time with 'Milly. Not only did she assist me with my #nevermissaMonday obligation, but also with my January challenge of #30dailyminutesofcardio. Not ideal, but we got it done.

Tuesday, feeling better, but still not at 100%, I fired up 'Milly again and wrote an interval workout involving 1/4 mile "runs" with sets of stair climbs (details HERE). This is not the first time I have done such a routine, but it's been awhile. I have a stair-climb event happening in April, so I will be amping up my stair-training pretty soon in preparation of the 86 flights that will be conquered on climb day.

Wednesday, I was stuck inside (again). The weather wasn't too awful, but I still was hesitant to risk being outside before the final crud of the cold & cough had concluded (I challenge YOU to say that three times quickly!).....so I stayed inside with 'Milly. Honestly, I enjoy the 30 minutes of daily cardio, it's just a drag doing those 30 minutes inside (almost) everyday.

Thursday, the temps were still cold, but my body was feeling much better. I messaged Barb (my usual running buddy) and we agreed to meet up after she got back to town after dinner. Oh my! I felt like a caged bird that had been set free! We ran five miles, and we ran them fast! The wind was a bit crazy, but only for a brief period. I returned feeling thoroughly exhausted, but totally elated. Everything from the quads-down was throbbing, and the three layers (under the puffer vest) were saturated...and I had my first major installment of endorphins in quite awhile. Mission accomplished.

Friday was low-key. SO low key, I didn't even selfie-document anything other than the #Fridayfashion post on my Instagram page (and I lived to tell about it).

Saturday dawned with ample sunshine, but bitterly cold temps (23-degrees a with feels-like of 11...don't be jealous). Having not pinned a race bib since that day in Tulsa (Route 66 Marathon, November 20th), I was eager to get back into the swing of things. There was a small 5K nearby that we've run before, in 2014 (recap HERE) and 2015. The recap is coming in a couple days, but I'll give you a spoiler alert...it went well! I had the optimal layers needed, and ran an average pace of 8:42 as I did battle with a ferocious headwind and a good portion of snow-covered (uneven) terrain on the trail part of the course.

Sunday, the temps were similar to Saturday, but a little less evil, so Barb and I headed out for an easy 5-miler. Although it's technically still my off-season, I'm eager to build my base back as I ease into spring training (I have a few half marathons on the roster and a full marathon in mid-June).

Although I ended the week with moderate mileage (15-ish miles), I'm satisfied. I don't need anything more than that just yet, and guess what? All the aches and pains of late have subsided! The off-season has been a success!

SO, tell me something about YOUR week? Weather? Mileage? Training? Recovering?

I'm linking up with these awesome ladies: 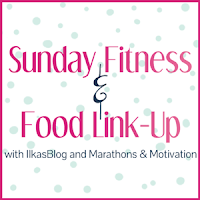