#confession : it took me awhile to catch on to the whole #hashtag thing.


I think hashtags originated on Twitter (?), but I could be wrong. I was very late to the Twitter thing and still do not do much on that platform. Other than sharing (most of) my Instagram posts, there may be a random "thinking out loud" observation, but that's where it ends. I barely have time to keep the blog posts coming, say nothing about scrolling through yet another social media maze of stuff.

But the hashtags? I have grown to love those babies. They're like mini explanations to my various posts...without any excess words (or punctuation). Kind of a time savor at the expense of complete sentences. I can honestly admit that I may be #overindulging in my free use of them, though.

Last year, I wrote a well-received post (appropriately titled, Me and My #hashtags) and used said hashtags to introduce myself to an audience of new fellow bloggers/followers. Well, there have been several hashtags that have gotten a lot of exposure this past week....

#brrrrr
I live in Iowa, and am very well-acclimated to whatever weather Momma N throws at me. I'm used to cold winters, snow, ice, and windy days with sub-ZERO "feels-like" temps. But the month of January has been downright evil to us. Fortunately, we have not had much snow this winter (maybe a few inches at most, but that was back in December). But having these bitterly frigid temps without any snow to show for it ...well, that's cruel and unusual punishment.


#itsmyoffseason
Hallelujah! As I have eluded to (in numerous recent posts), it's my off-season (more details HERE)! I trained hard and ran a late-season marathon, then jumped right into a 40-day running streak. Even though I took the running streak easy, it still was non-stop action at a time when I was also trying to recover from an especially tough marathon. Am I sitting idle? (ha! not a chance!) Am I still running? Absolutely (just not high mileage, and certainly not everyday).


#optinginsideagain
While doing my streak, one of the most utilized hashtags was #optoutside With the exception of one run (due to -30 temps), I did ALL  my streak runs outside (remember, I live in Iowa and these runs happened in December...just saying). But, as mentioned, the weather has been especially polar vortex-like recently, and since I'm not "in training" for any specific event, I don't have to be uptight about how I go about #keepingfit and #stayingactive. There are many fitness-based things I can do in the comfort of my house...and I can still run inside on the 'mill (UGH) if I have to.....

#mileswithmilly
Did you know I named my 'mill? She's lived with us for almost 16 years....so I finally gave her a name, and dedicated an entire blog post to her (I named her 'Milly). Her and I have been spending a lot of time together with it being my off-season and all. I have done a lot of power walking with her (on my non-running days, because #runnerscanwalktoo). And, there have been a few indoor miles run with her as well.


#5dailyplankingminutes
Did you know I'm an avid planker? I don't remember when it all began, but it's been going on for a few years, at least. I'm not a coffee drinker, but I love my chai latte's...and every morning, I do a 2:30 forearm plank while my chai is heating. Back in November, I took on the challenge of trying to do 150 minutes of planking for the month...and that habit stuck. I don't do a lot of 5-minute planks,but it's easy to check-off 5 (cumulative) minutes of planking each day.

So those are the five main #hashtags in recent use (plus a few bonus ones). Do you use hashtags? Do you find yourself using a lot of the same ones repeatedly?


I'm linking up with the awesome gals Meranda and Lacey and Rachel for the Friday Five 2.0 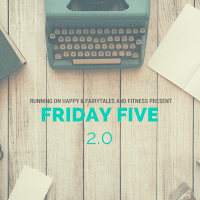 and with Nicole for the Fit & Fashionable Friday link-up.