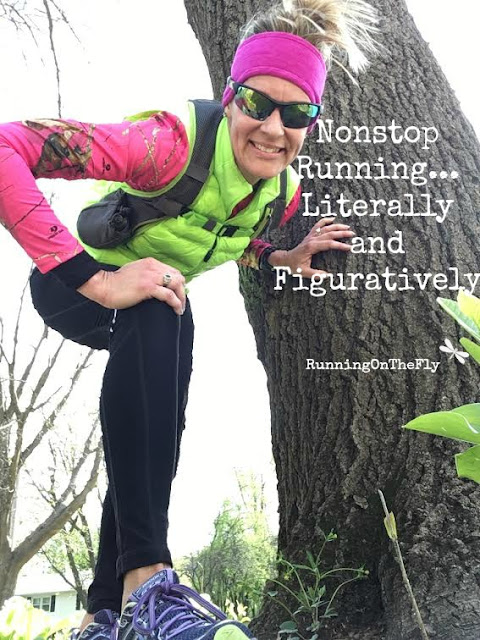 Can we talk about non-stop running?

This past week had me running, not just in the literal sense, but in the figurative sense as well. Fortunately, my training was not affected...but a lot of other things had to take a brief sabbatical (like blogging) as I fulfilled my annual Prom volunteer duties (more of that later).

Monday. Ahh, the weather! We had rain in the forecast, but moderate temps, so I met up with my running gal pal and did our #5at5 in the wee hours. The clincher? I fell back asleep after my alarm went off...and it was Barb's 4:50 a.m. text that woke me out of my dozing. I hurriedly got dressed (thankfully, I had set all of my gear out the night prior) and was out the door by 5:03 a.m. I must say, by not doing daily early morning runs, I can easily notice the sun rising earlier on the mornings when we are out there.
Tuesday. No running on the calendar, but a lot of #prompaintingsquats (you know, squatting and lunging over massive pieces of cardboard as I unleash my #artgeek tendencies). Also, I hadn't done a 5-minute plank in a few months, so I knocked out one of those. I usually do at least five minutes of planking each day, but I don't do a full 5-minute plank very often, so it's always a fun challenge holding it and feeling the burn (especially in those final 40 seconds).
Wednesday. Another non-running day as well. As mentioned last week, I am incorporating bi-weekly speed work for this 26.2 cycle, and was thankful this was an "off" week because I simply had other non-running stuff to do. And, that's alright (besides, my hamstrings and back were feeling a bit achy from all of the recent painting). I did a lot more of my Prom prep work, and squeezed in a short (but tough) strength workout before bedtime.
Thursday. I met up with Barb for another #5at5 session. We had moderately mild temps, but a bitterly tough NW 26mph wind. Had we waited and done our five miles 12 hours later, it would have really been miserable because the wind picked up and the temps continued to fall.
Friday. The temps were still a bit chilly (in the 40's), but the wind was crazy! Another non-running day, but it also was a near-full day at the office and all of our prom set-up was on tap for the evening.

Our high school's auditorium is a state of the art facility, but there's always other events happening in there during Prom week (elementary school spring concerts, for example), so we usually cannot get in there until the evening prior to Prom to set up our stage and decorations. That means the week of Prom is a crazy week for me, because I not only have to finish all the stage decs, but also coordinate the logistics of getting them to the auditorium and estimating how much labor needed to assemble everything.

The hubby has been my main production/assembly assistant the eight years I have been doing this gig. I also have an assistant who helps me with some of the painting and back stage details. We all met at the school around 6:15, and were done by 10:00 with everything.
Saturday. Well, even though it's Prom week, there still is a marathon happening in two months. Since I had a 12-mile run last weekend, and a half marathon scheduled for this next weekend, I elected to scale back a bit and do a 10-mile long run. Barb and I met up just after 7:00 and knocked out our 10 miles in near-perfect weather with an average 10:15 pace (though my watch zonked out at mile 8.65...Did the run really happen?).
My morning didn't stop there, though. The husband and I also were registered for the Bowl for Kids Sake event, benefiting the local chapter of Big Brother/Big Sisters. Holy cow! My entire body was feeling achy and strained (probably from the earlier morning's 10-miler, and also from all the numerous late nights stooped over random cardboard, with a paint brush in hand). My first game was 122, but something happened in the second game and I rallied....finishing with a score of 160!
The daughter was on her own (by her own choosing) for her various appointments (hair, nails, make-up), but we all met up with her group for pics in the late afternoon. They went off to dinner after that, and we had about 90 minutes of downtime to recharge for the evening. The Presentation of Couples began at 8:00 (but I was there, backstage, around 7:15 for the last-minute crosscheck of details). Following the Presentation, our crew dismantled the set to make way for the After-Prom entertainment (a hypnotist). That allows the hubby and myself about another two hours before reporting back at midnight for the After Prom festivities, which last until 4:30 a.m.(unless we elect to skip the pancake breakfast, otherwise we'd be there until 5:15).
Sunday. Even though I did not set any alarms, I was still awake around 7:30 a.m. My entire body (and mind!) felt exhausted, but there was a beautiful, sunshiny morning outside my window. I took the dog for a walk, then did my usual Sunday shakeout run (only one mile this time)....and felt energized and ready for the day.
My week (Monday-Sunday)came in at 21 total miles, not bad considering it was a scaled back week (in terms of running). Although this week may have appeared crazy and stressful, it's only one week out of the year that I have all of this Prom craziness...and I do love being involved, and having an opportunity to get my #artgeek on. I've been in charge of Presentation for eight years (since our oldest was a sophomore at the high school) and will "retire" after next year (when our youngest graduates). It will be strange to give up that "obligation," though I doubt I'll completely walk away from it...(stay tuned).

There was that little race in Boston last week. I made this chalk drawing four years ago after the bombings...and I share it every year as a tribute to all of those affected by that day in 2013.
My #fashionFriday post reflected my dilemma...my love for bright colors, but also the need to retreat to a puffer vest due to the cold temps. Are you following me on Instagram (HERE) and Twitter (HERE)? Post your Friday outfit and tag me! I'd love to see what you're wearing!

And, last of all.....Spring has come to life in my front yard gardens! 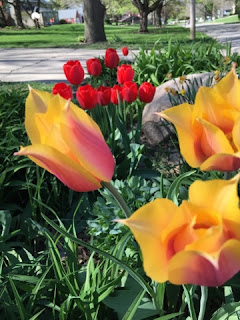 Back on Track (literally) 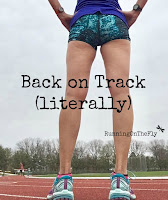 It's not a Race, It's a Training Run 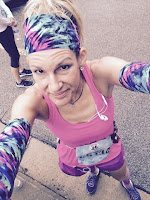 Tell me about YOUR week? Warm weather? Training for any spring or summer races? Have you ever pulled an all-nighter at an After Prom party?


As usual, I'm linking up with Holly and Tricia for the Weekly Wrap