A New Normal (for Now) 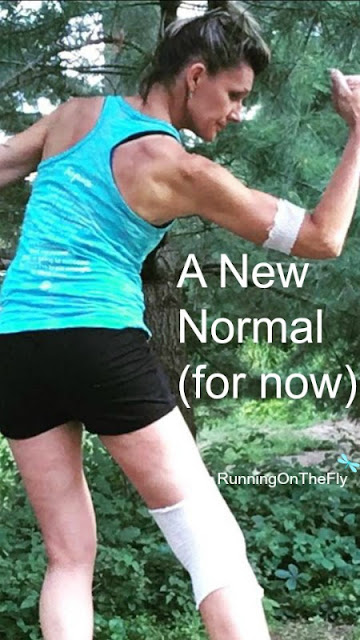 Well, welcome to my new (though temporary) kind of "normal."


Sometimes, "taking chances, expanding comfort zones, and trying new things" are thrown at you with no warning they're headed your way. What to do? Make the best of your situation, acknowledge your shock, and deal with what's happening. Also, it doesn't hurt to look towards the future...you know, the "big picture."

My weekly wrap-up posts are gonna have a slightly different slant to them in the next several weeks as I recover from emergency surgery (which happened on June 29th, more details HERE and HERE if you missed out on the drama as it was unfolding).

I will not be running, therefore, I will not be tracking my weekly mileage or have any training runs or races to share with you. I will, however, still be doing my best to stay active and maintain as much of my muscle tone as possible so when I do get the green light to lace up (probably not until September), I won't have to start back at square ZERO. Well, that's my plan on paper.

Thus, here's what went down this past week...

Due to the infection that was discovered (thankfully, just a mild strain of staph...but a serious infection, none-the-less) and the slow healing of a spot on the suture site, I spent most of last week camping in a hospital room. I had a wound vac hooked up, working its magic, to assist the wound in healing. The wound vac acts like a vacuum (hence the name), "sucking" excess fluids from the wound and surrounding flesh...enabling the skin to slowly compress back to its pre-trauma state (the skin on my knee, and several inches along my IT band, had been stretched and "pulled away" due to all of the infected fluid that had built up underneath). I know, sounds kind of graphic, huh. Just be thankful I am not posting pics of the suture site...yet.
Since this contraption required constant monitoring, it was attached to an IV pole. It did have a battery back-up, so occasionally the nurses could unplug it and I could leave my room and walk a few laps around my floor, but I had to take the IV pole with me. (Did you know I named my IV pole? His name was Guido...and he accompanied me everywhere)


Monday...nothing too exciting to report. I don't do things "half-buttocks," so not only was this a sudden adjustment-to-life-as-I-know-it endeavor, it also was my turn to serve as co-hostess to the Weekly Wrap link-up! Thankfully, the timing actually worked to my advantage...being cooped up in a hospital room allowed me lots of free time to read all the linked blogs and take my time in responding to the comments on mine. See? That #glasshalffull thing does work!

Tuesday was the 4th of July, which has always been a favorite holiday of mine. I had a been registered for a nearby 5K race, but (obviously) had to DNS it. By an act of fate (there was a lot of that happening last week), the hubby had thrown some miscellaneous running clothes into my duffle bag...and somehow my designated race outfit made it in there.
My surgeon checked in with me early in the morning. The wound vac had been removed, only to be placed back on a short while later. The suture site was still draining and he wanted to give it two more days on the wound vac, then check it again to assess the situation.

Wednesday was a day I had been dreading.....the dreaded PICC line became a reality. There had been talk all along of me getting my very own PICC line (so I'd be able to administer IV antibiotics on my own after being discharged) and I was truly terrified about the entire endeavor. I was creeped out by the thought of an 8-inch tube implanted INSIDE my arm, and I was overwhelmed with the knowledge that I wouldn't have a medical professional looking over my shoulder each time I was to give myself the dose of  meds. Seriously, this was NOT what I signed up for in seeking treatment for that "simple" knee bursitis a few weeks prior.
Alas, the nurse who did the duty was very calm and reassuring to me, and it didn't hurt that much. A perk? They would now be able to administer my IV meds via the PICC line and were able to remove the other IV sites from my arms/hands. Since this would be another new reality thing for me, I named my PICC line Linus. He might as well have a name, right?

I may have also done a couple 1-minute side planks with Linus. He might as well get to know what we're going to be doing for the next couple weeks.

My surgeon checked in with me early Thursday morning. The wound vac was disconnected, and I ended my brief (1-week) relationship with Guido. The suture site still had some minimal draining, but if all looked well by the end of the day, I'd be able to go home that evening.

...and I did! Don't tell anyone, but I rode illegally in the back seat (without a seat belt) so my long leg could stay level. #Shhhhh
Friday morning. My at-home "treatment" began with a 5:30 a.m. wake-up (which is my usual wake-up time anyways). I have to take the antibiotic vial out of the refrigerator and give it time to acclimate to room temperature before the scheduled 6:00 a.m. dose (I also have 2:00 p.m. and 10:00 p.m. doses as well).  Since I was already up and moving, I dropped to the floor for some (careful) stretching and did my first 2:30 forearm plank in over a week.


Throughout the day, I did some leg lifts and push-ups and a short strength session for my arms. Also, since it was Friday, I was sure to get back in my #FridayFashionFlair routine on my Instagram page. Since I have these dorky white compression sleeves (one over my knee and the other acting as Linus's blanket, keeping the PICC line protected), I might as well coordinate my outfit around them, right?
The weekend was very low-key for me. No long distance runs (and no recovery runs the day after). And, no weekly mileage to report (I know, #shocker). I have been doing my daily planks since being home, and those feel oh-so-good!
So, how am I doing? Overall, I'm alright. Although I am so incredibly thankful things weren't more serious, it is a miserable slap in the face that this happened. I am bitter it happened to me, and I wouldn't wish it on anyone else. Thankfully, the IV meds are only for a couple more weeks. Also, my surgeon told me that since this is basically a "skin-only" kind of recovery, I shouldn't have any problems with muscles being affected. I just have to be very careful the suture heals properly before moving forward. Trust me, I am not going to do anything to mess with that.

I set a few July goals in place recently. These are not only to aid in maintaining most of my muscle tone, but to also give me a few fitness incentives. I'm not good at sitting still, and these should keep me busy without putting any extra strain on my knee (and the 6-inch suture). It's tough to find exercise moves that do not involve knee-bending or water!
I have had to make a few adjustments at home, though. For example, I'm slamming a lot of pills every morning. We're talking Zinc, Probiotics, Vitamin C, a different multi-vitamin (with minerals), and baby aspirin...these are in addition to the Turmeric, Glucosamine, and Calcium that I was already taking. I'm allowed Aleve as needed for pain. I'm starting to get some of the feeling back in the skin over my knee, so that's been a little "tingly" this weekend,  but minimal.
Also, I'm sleeping on the couch for now. Believe me, it's much easier to elevate my leg on a padded armrest than a squishy pillow under layers of bedding. Of course, Max thinks he needs to keep me company instead of enjoying the other half of the bed with his Daddy.
In case you missed them, here's my posts from last week:
Plot Twist!
#GlassHalfFull
Find a Way, Make it Happen

Anyways, that's what's up and happening in my world. Have you ever been sidelined for an extended period from running (or your favorite sport)? Ever have a PICC line? How about a week-long hospital stay?

I'm linking up with Christine (on behalf of Holly and Tricia) for the Weekly Wrap. Please join us!