Whew! It has been a whirlwind of a week (at least in my little corner of the universe).

But first things first....welcome to the Weekly Wrap! I am honored to be co-hosting the Weekly Wrap with Holly (from HoHo Runs) and Tricia (fromMissSippiPiddlin ) this week. Care to play along? Simply add your link (by following.the AdLink icon at the bottom), and check out the other linked blogs as well. Please don't just link- drop and dash, though, take some time and visit the other linked blogs...you never know who you may meet or who you could inspire by supporting and encouraging a fellow blogger (or several). 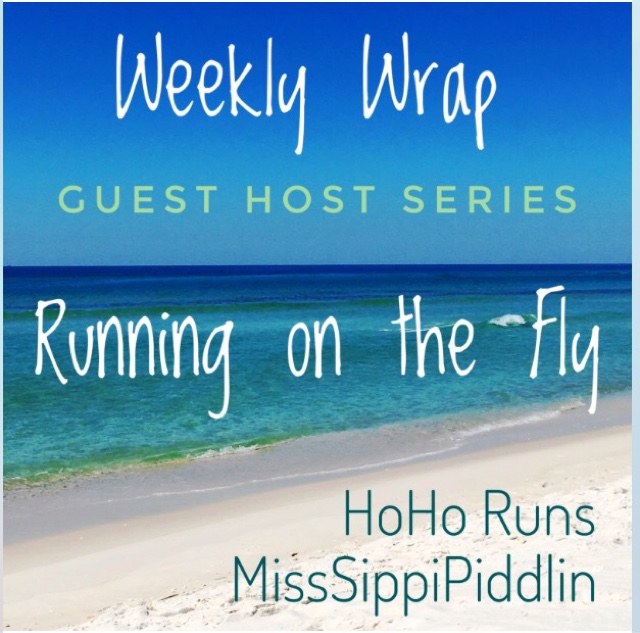 Have you ever woken up from a strange dream, and after a few seconds were relieved that it was only 'just a dream?" Well, my recent dream quickly morphed into a twisted nightmare. The thing is, though, I was fully awake and it was not a dream.

Last week began (almost) like any other week (well, any other week following a recent marathon). I was a week out from the finish line of Grandma's Marathon. My body was feeling (overall) recovered from running 26.2 miles but that bursitis had returned to my right knee. I had been on meds (Prednisone) for a few days and my doc had said to give it time. I was taking things easy. I even bagged my #nevermissaMonday run and walked a few miles instead.

As the week progressed, things did not improve with the knee. I tried to stay somewhat active (strength-training and planking, etc.) in hopes that doing so would move things along and at least keep the joint loose.

By Wednesday, though, there was substantial swelling returning and the redness (and pain) was migrating up my leg (near the IT Band area). The knee joint was so stiff I could barely bend it without wincing. I decided to call the ortho specialist (an hour away). She had taken care of me two weeks prior (cortisone shots before the marathon). I was able to get an 11:30 appointment for the next morning.

Wednesday evening was a nightmare of an evening. I felt feverish and achy all over. I had taken some prescription meds (for anti-inflammatory help), so I was afraid to take anything else for the fever.

I did wake up Thursday feeling somewhat better. My fever broke in the night (ugh...what a mess), but I was still a bit achy. The redness wasn't quite as bad, though, so I was optimistic things were on the mend and I'd be almost brand new after my appointment.

On a whim, our youngest daughter came along with me to the appointment. I had felt so loopy and out of it (the night prior), I was afraid of driving myself.

The specialist came in and took a quick look at me, and said she wanted me to see her surgeon (same building). He took a quick look at my knee and said he thought it look infected. He drew some of the fluid out of my knee and promptly said I needed to head to the hospital and get some IV antibiotics ASAP... and he was gonna call and see if he could get me in for surgery that afternoon. WHAT????

He left the room for a minute, and upon returning began asking me a series of questions...When was the last time I had eaten? Had I had anything to drink? Any known allergies to meds? Again, WHAT???? By this time, it was around 12:30, and I felt like I was watching a strange movie with myself as the main character. Apparently, I was not going to be headed back to work, or even back home. 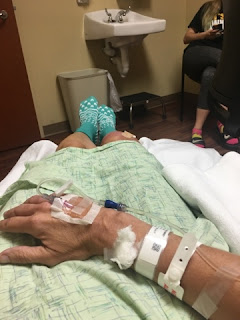 We called the husband and gave him the update, and headed to the hospital. I went through all the check-in procedures, and was placed in a pre-op room. More health history questions, needle pricks, IV placed, and I was given a hospital gown to change into. Surgery at 3:30. Yes, this really was happening.

It was around 4:15-4:30 when I heard someone call my name, waking me up from that unplanned Thursday afternoon "nap" in the operating room. They told me the surgeon had already called my husband, and that the daughter was headed back home. And I had a new 6-inch battle scar to call my own.

Friday was your typical day spent in a hospital room....lots of calls, texts, and messages from friends and family who were just as dumbfounded as myself as to what had just happened in the previous 24 hours. One perk to being hospitalized is the guilt-free time to catch up on blogging stuff. Oh, and flowers. Flowers certainly brightened up the décor in my room and lifted my spirits.

Saturday and Sunday were spent in the hospital as well, and currently, it's not certain when I'll be discharged. So, yes! This blog post is coming to you live from the confines of a hospital bed! Fortunately, I will have plenty of time to read a lot of blogs in the next couple of days.

So, my prognosis? That's still a bit up in the air. We'll probably never have a specific answer as to what caused the bursitis in the first place, and why it seemed to disappear only to re-emerge with a vengeance several days after the marathon. As for the infection (which, at the moment, appears to be a "mild" staph infection), it's unclear if that was there two weeks ago (and undetected) or if it developed from the bursitis relapse.  None the less, my surgeon told me if I had waited much longer, there was a chance I may have lost some of the skin on my knee...and that would have set things into a crazy downward spiral, starting with a skin graph and possibly never being able to run again afterwards.

As for my running? Well, my summer has totally been turned upside-down with all of this. I am not supposed to run for at least two months (to give the suture enough time to properly heal). That means the 4th of July 5K is out, and the Chicago Rock 'n' Roll 13.1 is not even a remote possibility. I don't have anything else on my calendar until November, but I certainly had planned on doing a few other half marathons (I just had not registered for them yet). Totally not the summer I had in mind. Can you say, "Plot Twist?"

It's a frustrating situation. I'm one of the rare runners who respects recovery. I don't do crazy, excessive mileage. I do not run everyday. And I listen to my doctors and do what they tell me. I'm in pretty good health and in decent shape...and, yet, here I am. But, I do try to keep a positive attitude, and that will be my main force in keeping me going these next couple months.

We won't talk about weekly mileage last week, ha! In case you missed them, here's my posts from last week:
One Challenging Recovery Week 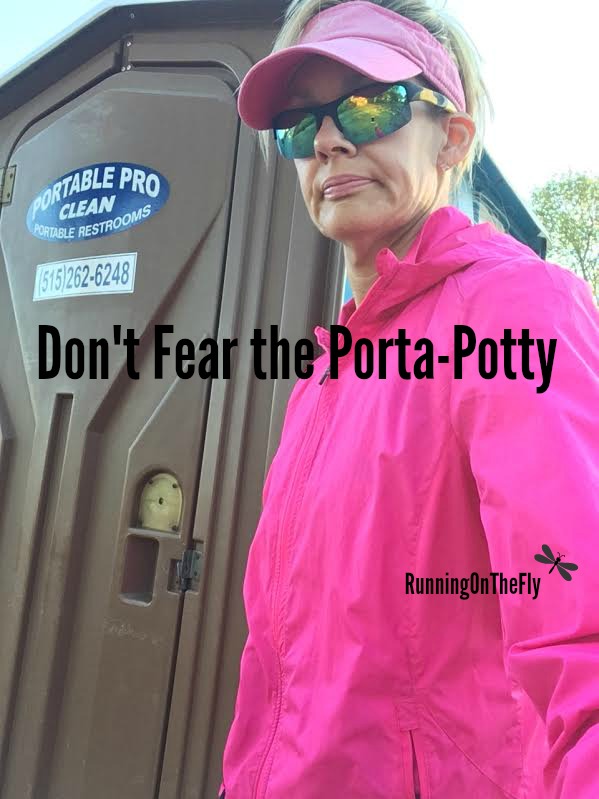 Runfessions with a side of Lemonade 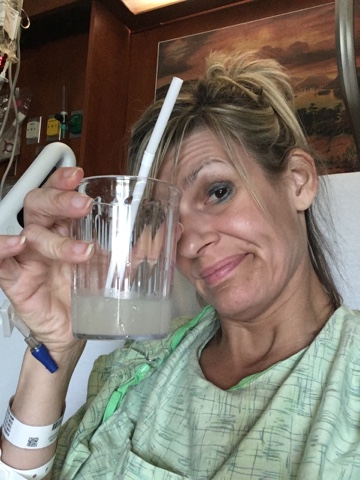 So, that's a wrap (for now). Tell me...have you ever been blindsided by a sudden injury that wasn't necessarily running-related?

I'm linking up with  Holly and Tricia for the Weekly Wrap. Please join us!

An InLinkz Link-up
Posted by Kim at Running on the Fly at 3:18 PM