Keeping all things on the down low....that was my week.

And, boy or boy, is it tough to sit still when your body feels like it should be moving and grooving.

Having run a rather tough (super hilly!) marathon in North Carolina on Saturday, and then flying back to Iowa early Sunday morning, I was anticipating the good ole DOMS to come a knocking. There was some stiffness Saturday afternoon and evening following the marathon (duh!), but surprisingly, all things felt good Sunday, even after several hours of car and air travel.

I'm no stranger to the marathon, or the wear and tear on one's body that happens as a result. This was not my first rodeo (it was, in fact, my 8th). I totally respect the training, the race itself, and the recovery that follows. So, it was in my best interest to keep a low (fitness) profile this week....


#nevermissaMonday
Since I had felt so good Sunday, I was just certain it was only a matter of time before I'd feel the full effects of Saturday's 26.2 miles. Imagine my surprise to wake on Monday morning, and still feel nothing. What???? Granted, it had only been two days, but where were those DOMS? I decided to head out and do an easy-paced 2-mile run while the hubby went to the gym. The college campus has a great well-lit 1-mile "loop" right outside their workout center. If things felt stiff or "off," I could easily do walk intervals, or simply just walk back to our meeting place. Amazingly, though, everything felt fine. No harm, no foul.
Typical Tuesday

As has been the protocol for the past several months, Tuesday was pretty much a total rest day. I did ride over to the workout center with the hubby, and walked while he was at the gym, but that was it. No strength-training, no HIIT'ing, nothing else. And, still no DOMS to speak of. No complaining (well, the temps certainly could have been warmer...).
Another weird Wednesday
Still anticipating the DOMS to arrive, Barb and I decided to not even think of a doing our ritual #5at5  (five miles at 05:00) this week. Instead, I slept a good hour later than usual (since I didn't need to be up and out the door at the usual 5:00 a.m.). Still, no DOMS. I did head over to the gym with the hubby (again) and walked a couple miles outside while he worked out (again).
Thursday.....

Well, still  no DOMS. Totally weird to not have any residual aches or pains from the marathon. Even though my body was feeling good, I still knew it wasn't fully recovered after only five days post finish line. Since the routine of riding along with the hubby to the gym had been going well, I decided to do it again. He went inside and lifted, and I chose to stay outside and run a couple of easy miles. Even with similar temps as we'd had all week, the air wasn't as damp so it actually felt quite a bit warmer.
Finally Friday
Talk about a l.o.n.g. week when there's not much activity happening. Another 2-mile walk while the hubby did his thing at the gym. Yadda Yadda Yadda. Oh, and more rain, go figure. Thankfully, the rain was done by the time we headed outside. One good thing about the marathon being done is that I don't have to obsess over the weather for awhile. Glass half full, right?
A simple Saturday
Nothing much on tap (again). I took Max for a walk in the morning before heading to the IMT Des Moines Marathon expo to get my race packet. This is an event that is very near and dear to my heart. It was my first official half marathon (in 2008), and I have been back almost every year since to run in some of the various events over the weekend (there's a 5K, a 5-miler, a half marathon, a full marathon and a marathon relay). Even with the Cannonball Marathon just done, I didn't want to miss out on this weekend. Besides, having just run 26.2 miles, I was already in condition. Don't worry, I did not take on another full marathon, but I was registered for the half marathon.
Another Sunday in race gear!
I simply do not have enough good things to say about the IMT Des Moines Marathon. I ran the half marathon Sunday morning, and am just blown away at my experience. My splits were consistent, I felt strong the entire 13.1 miles, and I finished with a smile. Even the 31F temps at the start line were manageable because of all the sunshine. Maybe the race seemed (almost) like a cake walk because it was a polar-opposite endeavor in comparison to the marathon a week prior? Of course, being half the distance certainly helped. It's not everyday that all things fall into place on the race course, so I'm extremely grateful for the day I had. Anyways, the race recap will be posted in a couple days...stay tuned!

So, to say it was kind of an uneventful week (up until Sunday) would be a drastic understatement...in a good way, though. The fact that the DOMS never made an appearance was a very nice surprise. Not sure if that means I was well trained (and those crazy hills weren't as treacherous to my body as I'd believed), or maybe I just didn't "leave it all out there" on the race course in North Carolina. Who knows? I'm just glad this first week of marathon recovery went so well.
In case you missed out, here's the posts from last week:
Erring on the side of Caution
Cannonball Marathon Race Recap
Too Much GRIT To Quit

In other news:
Did you catch my #FridayFashionFlair post on Instagram? Even though I'm all about color, I have had a bit of an obsession with grey in recent years. It's more of  a neutral color, but it pairs nicely with pretty much every other color. And, since it's such a subtle color, all other colors naturally pop when paired with it. Of course, I also have a small scarf fetish...and this one has cute little dog paw prints (the site I ordered it from claims each scarf sold provides 35 meals for dogs at a shelter, and I'm all about rescue dogs as well). So, as always, you're invited to play along with us on Fridays...post a pic of a featured outfit, grab the hashtag (#FridayFashionFlair) and drop me a tag (@Runningonthefly). Easy peasy!
I've mentioned before that the hubby and I are University of Iowa alumnae. Friday night was the Homecoming parade, so we ventured to Iowa City (an hour away) to watch it. We also had dinner with the son, our resident Hawkeye student. Fun times! 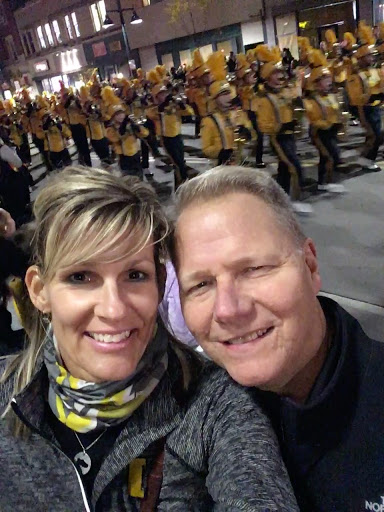 Lastly, the youngest daughter surprised us with a new baby! Isn't she a cutie? We've had a lot of hamsters through the years, but this is our first guinea pig. After much deliberation (and a plea on Instagram for suggestions), we settled on Mizuna (the "female" version of Mizuno, as in the running shoes LOL), but we are calling her Mizzy for short.
So, that's another week all wrapped! With the IMT Des Moines Half Marathon done, I have nothing on the calendar for awhile. I may find a few short races to add in just for kicks, but I'm gonna take a little time to scale back on the mileage. I've had several months of high mileage, so I know my body and mind are both ready for some serious rest, relaxation and recovery.

How was your week? Any races? Training? Strange weather? Recovery?

I'm linking up with Holly and Wendy for the Weekly Wrap. This weekly check-in is such a great place to connect with fellow fitness-minded peeps. Please join us!
Let's connect : Facebook Instagram  Pinterest Twitter
Posted by Kim at Running on the Fly at 7:06 PM