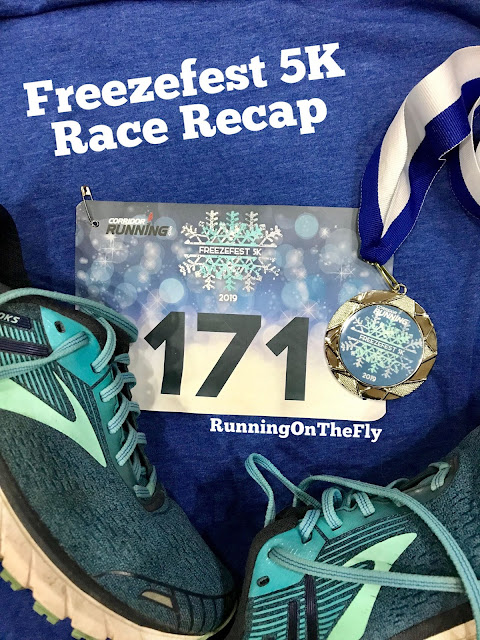 How about a new-to-me race (my first race of 2019, none the less)?  On a cold (though quite sunny) February morning? Even though it was only a 5K, how about we do the majority of our pre-race running indoors in preparation for this outdoor endeavor? Oh, and just to make it interesting, maybe we could forget our Ipod and Garmin back at home?

Would you be game?

Such was the case for the 2019 Corridor Racing Freezefest 5K.


Now in its 19th year, the FreezeFest 5K took place this past weekend (on Saturday, February 16th) at the Squaw Creek Park in Marion, Iowa. I had heard of this event in years past, but it had never worked out for me to run it until this year.

The weather in Iowa has been especially cold in recent weeks, too cold and icy for me to do much running via the great outdoors. Even though a 5K is not a lengthy distance, I was a little concerned if my lack of outdoor running would affect my race day experience. After all, the stuffy indoor air surrounding my treadmill is much different than the crisp sub-freezing air outside.
The race didn't start until 11:00 a.m., so the hubby and I hit the road around 8:45 for the approximate 80-mile trek to the race site. Having never been there before, I wanted to allow plenty of time for travel, parking (we'd been warned the parking was limited) and packet pick-up.

We arrived on the scene around 10:15, and I was pleasantly surprised to see the hosting site, the Prairie Oak Lodge, was an indoor facility! I was expecting more of an open picnic shelter, so having a heated building (and indoor plumbing) was such a bonus! I ran in, grabbed my packet, and then left the extras with the hubby (who was going to leave and do a few errands while I did the race).

With plenty of time before the start of the race, I decided to head out for a short warm-up run. There already were several other runners doing the same, so I just followed the crowd of them out and back for about a mile. Even though the temps were cold (16F, with a 6F feels-like), it actually was quite pleasant outside. I didn't really notice the wind and the ample sunshine was beautiful!
Although I have done other races without music, I almost always at least have my Garmin or a stop watch of some sort to gauge my mile splits. Not this time! There weren't even mile markers (at least that I noticed) along the route, so I was completely on my own in terms of running strong, but also controlling my pace, for 3.1 miles.

The route was very simple...an out-and-back (with a couple slight curves) for the first half, and then another out-and-back in the opposite direction (also with a couple gentle curves). There was a water stand right near the start line (which also was the approximate halfway point of the course).
Anyways, having not run outside much in the past month, my main goal was to simply run strong. Also, having not done any "real" speed work in recent months, I was leery of setting any finish time goals. I can usually run a 5K under 27 minutes, but that's (usually) under ideal circumstances (ie...warmer weather, fewer layers of clothing, and music for mojo). You get the idea.

The National Anthem was played, and we were off!

The first 200 -400 meters of a race are such a crap shoot for me, and this race start was no exeption. It's hard to start off fast, due to the cluster of people. But, in the crowd of said people, it's difficult to know just how "fast" or "slow" I'm actually going (there weren't any corrals or line-ups based on projected pace/finish times). And with no timing device, I just went with what felt good. I thought about using my phone as a timer, but I didn't trust the battery, given the cold air. Besides, as twisted as it may sound, it was a bit exciting to see just what I could do without any technology on standby. Onward!

The crowd of runners quickly spread out. The route was on a paved road, and due to a brief thaw (on Thursday) was clear of all snow (and only had a few scarce patches of ice). As we made our way around the first curve, I just tried to run without exerting myself. My legs felt loose and free (amazing how that is when there's no fear of stubbing one's toes on the treadmill). I made it to the turn-around (maybe 3/4 of a mile?) and everything felt good. The slight wind that we did have was out of the east, so after the turn it was at our backs.
I made it to the water stand and, for a brief moment, considered grabbing a cup of water. Then I decided against it....although I was feeling quite hungry (due to the time of day), I really was not thirsty. This was, after all, just a 5K and I'd just passed the halfway mark...if I kept up my pace, I'd be done in less than 15 minutes.

The course was pretty flat, and there were several trees along the edge of the road. The road was plenty wide, as well, so there never was any crowding with the two directions of runners on either of the turnarounds.

As I approached the second turnaround, I couldn't help taking stock of the returning runners....and none of the gals looked very old. In fact, I didn't really see any who looked like they could pass for my age group. Or was that just wishful thinking?

The final stretch to the 3-mile mark had us running due east (again), so there was a little bit of a headwind. By that point, though, I was pretty warmed up (and had pulled off my gloves just after the 2-mile mark) so the wind actually felt a bit refreshing.

I rounded the corner, taking me back into the parking lot; the finish line was just a short distance from there. The timing clock turned over to 26:00 just as I was approaching the chute. For a split second, I was a little bummed that I hadn't been able to sub-26, but I was still pleased with my efforts considering I ran the race by feel and didn't have any technology gadgets to guide me along.
Imagine my surprise when I picked up my print-out, showing that I had, indeed, sub-26'd the race! And, I had placed 2nd in my age group!
Wow. How did that happen??? I have a few theories...(1) the cold weather is pretty invigorating, even when it's super cold, (2) it felt so liberating to NOT be on a treadmill, my legs just let loose and had their way, and (3) a lot of my treadmill runs have defaulted into mini speed sessions since I add 200-400 meter surges at the end of each mile to get those treadmill runs done faster. In all honesty, it really didn't seem like I was going that "fast" for those 3.1 miles. I certainly was feeling good, though, so I just kept going. I did some research, and this 5K was my fastest 5K in almost four years. Yes, that's how good I was feeling on Saturday morning in the cold air without my music.

All in all, it was a pretty decent morning. The cold weather wasn't so bad after all. Although I'd had breakfast (the standard oatmeal), it had been a few hours and I felt hungry the entire time I was running. No music? Apparently, I'm not as co-dependent as I'd thought on "needing" music for mojo. And, not having my Garmin really wasn't that painful. I'm a strong believer in running based "on-feel" anyways. It's comforting to see the paces hit as the miles tick by, but I've been running long enough that I can (usually) sense when I'm running too fast or too slow. For a race that had several potential factors that could have worked against me, things certainly played out nicely. It would be nice to have that happen more often, am I right?

Another tricky variable for winter racing is one's running gear, and I got lucky with my outfit of choice for this race. Thankfully, the cold temps actually felt comfortable due to the minimal wind. Again, having not been outside much in recent weeks, I had to go with my tried and true ensemble of double layered tights (the base layer was flannel-lined), two flannel-lined tops, a puffer vest, stocking hat and gloves.

Would I do this race again? In a heart beat. It was put on by the Corridor Racing group, and they do a number of races in the eastern Iowa area. The event was well organized and the packet pick-up went smoothly (especially considering it was day-of pick-up). They had a great spread of food post-race, and numerous door prizes (which I missed out on because I didn't stick around after the awards were finished). The proceeds from this event raised $630 for the Boys and Girls Club of Cedar Rapids.
The event shirts are nice, too! Long-sleeved, tech fabric, great color and eye-catchy graphics. The bibs were unique to the event as well. No finisher medals, but the age group medals went 3-deep in 5-year increments (and have the specific age division engraved on the back of the medals). They also had good-sized trophies for the overall male and female. 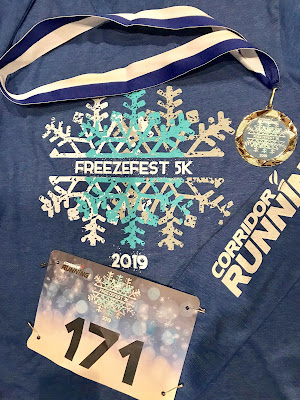 So, that's what went down on a cold February morning, on an unfamiliar race course, with no music or Garmin. Stranger things have happened.

Have you ever forgotten your watch/Garmin/music for a race? If so, did it affect your performance, for better or worse? What are the coldest temps you have ever raced in?