It was an interesting week.

The winter temps did their thing. More snow fell. The ice remained in scattered places. We even got rain! And I was alright with everything. It's not that I'm (all of a sudden) loving this crazy 2019 winter season, nor am I giving up on my longing for summer to return. I simply came to a catharsis of sorts this week.

Would you like to hear what it is?? This catharsis is pretty earth-shattering....

As tempting as it is to continue to whine about how cold it is, or how much Milly time I've had to endure, or the record snowfall we've received ... I'm choosing to focus on what I am able to control. I cannot make the sun shine brighter, the temps remain above-freezing or the wind cease to blow, but I can smile at the fact that spring is less than four weeks from arriving. Even this unrelenting winter seems less formidable knowing it has to eventually end. Glass half full, right?

Anyways, here's what happened in my little world of fitness this past week...

Monday
Cold temps, again!  My legs were feeling a touch of the DOMS (Delayed Onset Muscle Sorenes), probably from the race two days prior. Not feeling another treadmill run, I opted for 25 easy flights of stairs and postponed the run until after work Although the temps had remained cold all day, the sunshine was blindingly beautiful. Later, I was able to get a short 2-mile run, outside, and felt like a caged bird set free (at least until the next snow storm arrived)! The 4F feels-like temps never felt so fine!
Tuesday
Rest day was on tap. I  did a 1-mile power walk (on the 'mill) before work, and 25 flights of stairs later. And that was it. Even on a rest day, I try to get in a little bit of early morning cardio (nothing more than 20-30 minutes). I don't have a lifestyle (or a job) that allows me to sit much. If I'm not walking the dog (2-3 times each day), I'm up and down my stairway multiple times (mostly due to absentmindedness) or taking early morning (or evening) walks. While I don't totally "rest" or sit idle, I do scale back the intensity of everything. That's what I have found works best for me and keeps my muscles (and my mind) quite content.
Wednesday
As forecast, more snow started falling Tuesday evening and was still coming down in the early hours on Wednesday. Big surprise. Another early morning 5-miler with Milly and another #winterrebel post-indoor-workout-outside-selfie to document it. You gotta laugh about it, right? I think we've gotten well over 20 inches of snow, just in February.
Thursday
Up and at 'em, quite literally! I did 50 flights of stairs, numerous upper-body reps and push-ups before work...because why not? More importantly, because I could. Fitness is a choice, after all. With another impending winter storm in the forecast (I kid you not), I decided to do a short run after work, as well, and bank a couple outdoor miles in anticipation of more Milly time over the weekend.

Friday
With another rest day on the schedule, I did 25 flights of stairs in the early morning. Look closely, I also did them barefoot and in (somewhat) slow motion. Doing the stairs barefoot is a great way to stretch your calf muscles and your arches because there's much more range of motion.
Saturday
With rain in the forecast, there was potential for slick streets. I wanted to get in seven miles, and had a small window of opportunity to head outside before the rain hit. With all the treadmill miles as of late, I was hoping to run a few miles outside so I would NOT have to run the entire seven miles inside. It wasn't yet raining, but there was mist in the air and numerous puddles to navigate around (along the slush-laden streets and sidewalks). After 3.5 miles, I white-flagged the outdoor run, and made it home just as the real rain started to fall. I changed into dry shoes and socks, and did the remaining 3.5 miles on the treadmill. It's quite amazing how easy those 3.5 treadmill miles felt, probably because I had already "warmed up" with my run outside. Too bad I don't have that option for every run with Milly.
Sunday
Well, with the previous day's rain (and freezing temps), the roads were not just layered in a nice ice/snow mix, we also had crazy wind gusts! All I wanted was a simple mini-cardio fix, via a walk, before church.  So it happened with Milly ((again)). Not a big deal, but I really miss getting that fresh air fix in the mornings. I also did some stairs and stepped outside for another #winterrebel selfie. Really, these outdoor pics are such a small thing, but they are quite empowering for this outdoor gal who has been stuck inside far too much.

In case you missed them, here's my posts from last week:
A Winter Rebel...with a cause
Freezefest 5K Race Recap
Well played, Momma N...Runfessions for February

In other news:
Did you catch my Friday Fashion Flair post on Insta? Even though Valentines Day is over & done, I’m still wearing red. Hey, it’s a favorite color, so why not! Even though, it was a bright & sunny day, the temps were flirting with the sub-freezing zone ((again))... so the puffer vest was the perfect layer of warmth over my cold shoulder top (can you just see the irony?) "Fashion before function” is my mantra. Anyways, these Friday Fashion Flair posts have been going on for a few years, and they kind of serve as a gallery of outfits when I have moments of "What Can I Wear Today???" As always, I invite my followers to play along...post a pic of a featured outfit, grab the hashtag (#FridayFashionFlair) and give me a tag (@runningonthefly). 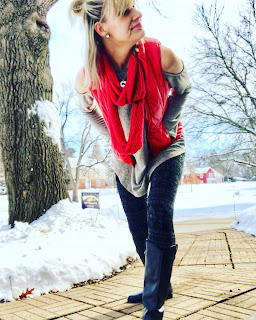 The stair climb challenge at work continues. As of last weekend, I have surpassed the challenge's goal of 562 flights, and am working my way towards my goal of 1,000. As this post goes live, I'm just under 800 total flights, so I'm well on track for reaching 1,000 by March 2nd. Onward and upward!
Finally, I have to give a mention to my dear friend, Barb. She's not only a great friend, but my main running companion, especially on the early morning 5-milers and long weekend training runs. She's had some knee issues in recent months, and had a meniscus tear repaired this week. The prognosis looks great, but it will be awhile before she laces up and joins me on the road. Thankfully, it happened at an optimal time with the nutzo weather we've had. Glass half full (have I said that already?).

All in all, it was a decent week in terms of running and all things fitness. Total running miles came to 16, several miles walked (with Milly), a great upper-body session and all kinds of stairs climbed. I'm thankful I was able to get outside three times (three times!) last week for some running, which gives me hope the end of winter is (somewhat) in sight.

How was your week? Your weather? Snow? Rain? Wind? Ice? Any races coming up?

I'm linking up with Holly and Wendy for the Weekly Wrap. This weekly check-in is such a great place to connect with fellow fitness-minded peeps. Please join us!
Are you following me on social media?
Let's connect : Facebook Instagram  Pinterest Twitter