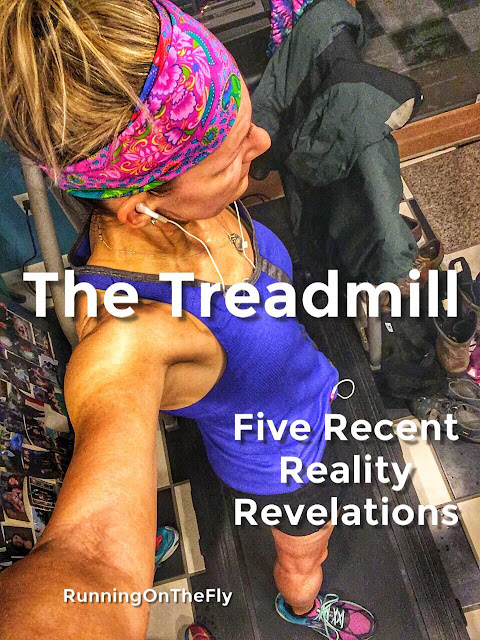 That indoor apparatus that allows one to walk or run when the great outdoors aren't so great.

How do you feel about the treadmill? Do you love it? Hate it? Love to hate it (or vice-versa)?

It's no secret that I'd prefer to be outside. In fact, my treadmill saw very little action last winter...and I don't think I fired it up (at least for running) until just recently.

Well, that's definitely NOT been the case this winter. Prior to the official arrival of the Polar Vortex, Iowa saw several days of low, single-digit temps (with sub-ZERO windchill). As much as I thrive on my outdoor runs, even I knew it wise to stay inside.

All told, I have done seven runs, this winter, with Milly (she's the name I gave to my treadmill a few years ago). SEVEN! What's more, six of those seven runs all happened in succession, over the course of 12 days (the seventh one just happened this week, after a 2-run outdoor reprieve).

With all the "Milly Time" as of late, I have had a lot of time to do a lot of thinking about how I really feel about her. Here's five reality revelations, courtesy of Dear Milly....

As odd as it may sound, I actually was kind of looking forward to my run with her, on January 19th. After all, it had been almost an entire year since we'd run together. I was still in the midst of my off-season, so I had ZERO goals in terms of running (regarding speed or distance). I even walked a half-mile warm-up, so I could start the actual "running part" at a decent pace. Everything felt (somewhat) decent, I got a great sweat going, and called it good at the 4-mile mark. It wasn't until I was doing my 1-mile cool-down walk that I realized I probably enjoyed the run because I knew (subconsciously) that I could quit at any time. Oops.
Probably my biggest gripe with treadmill running is the repetitious monotony of it. Granted, my treadmill is upwards of 18 years old, so it doesn't have a lot of modern bells and whistles. It makes too much noise to even consider moving it down to our basement (where I'd at least have a television for entertainment). Also, we have it planted in our mudroom, right under a heat vent. At least I get my backyard for a view instead of a blank indoor wall. These recent treadmill runs, though, did allow me to ditch the fleece-lined tights and thick gloves, and run in a tank and shorts. At least I could pretend it was summer because it certainly felt like it. Gotta love that sweat equity.


It's been said that treadmill runs are good for building one's toughness, both mentally and physically. I have to agree with that for many reasons, including the aforementioned boredom, the strain my body feels from the unchanging terrain and the constant fear that my long strides are gonna land me in a face-plant if I should stub my toes. Simply put, most of my treadmill runs feel a lot harder than I think they should. Case in point, last weekend's outdoor 7-miler (dare I say?) felt almost effortless. I ran it with a friend, we ran faster (and farther) than most of my usual treadmill runs and we were talking non-stop the entire time. What gives?
Recently, I ran my first solo #5at5 (five miles at 5:00 a.m.), and I ran it on the treadmill. How's that for a double whammy (usually, these 5-milers are run outside, with my friend, Barb). What's more, is that I've now had three of these early morning expeditions with nothing to entertain me but my Ipod (which is difficult to hear over the treadmill's motor) and my reflection in the window. Although a 5-miler on the treadmill is nothing for a lot of runners, it's like running a full marathon for me with all the mojo and determination I have to summon to get it done. That said, once I step off the 'mill, there's usually a substantial surge of endorphins to bask in for the next several hours. Call me Hercules. 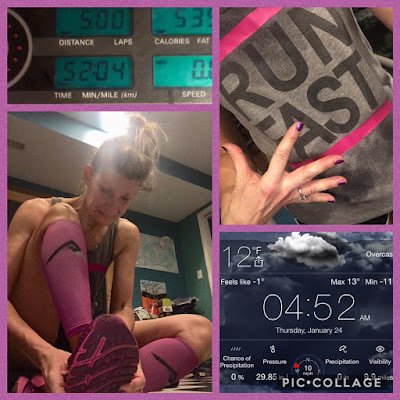 Just a couple days ago, when I ran my third #5at5, and it was an ongoing battle of Milly vs. me. With it being so ridiculously cold outside, our furnace is working overtime. Remember that heat vent above the 'mill? Although I have it closed, it still emits some heat. Wednesday's run felt especially steamy, and I was especially sweaty as a result. I had to keep increasing the speed (every 1/2 mile or so) to get me closer to the desired distance faster. I had to make a quick stop at the 2-mile mark to grab a towel...and then, again, at the 3.5-mile mark for a potty break. When I finally got to the 5-mile mark, I felt nothing short of victorious. My grit had come through for me, yet again. Although I can tolerate a miserable treadmill run now and then, I'm quite grateful I'll never have to run an actual race on one. How's that for a glass-half-full revelation!


Anyways, although I much prefer to run outdoors, I am thankful I have access to an indoor option without having to leave my house. Although the treadmill ain't my gig, I have learned to tolerate it. And, I have much respect for the runners who love their treadmill runs, especially those who are knocking out double digit distances on the regular. Kudos to YOU if you're one of them.

What are your thoughts on treadmill running? Do you have access to one in your house, or close by? What's the longest distance you've run on a treadmill?