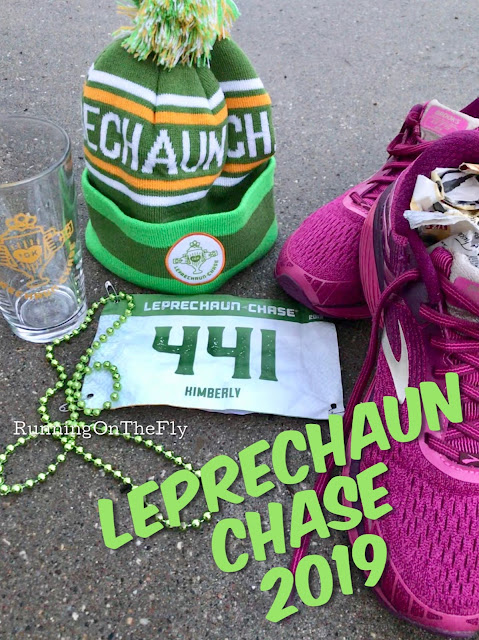 I'm always up for a good time, especially on race day.

The temps were cold (upper 30F's). There was wind. And, did I mention rain was in the forecast for the entire day?

Such was the setting for the 2019 Leprechaun Chase (Des Moines, IA).


Now in its seventh year, the Leprechaun Chase 10K is an event that never disappoints. It's a race I have run numerous times... 2014, 2015, 2016, 2017 and 2018 (basically, every year except the first year it existed). As one can gather, it is a St. Patrick's Day-themed event, so the majority of participants are dressed in green (as they should be, right?). What makes this race unlike any other, though, is the chase format...the Lasses (the gals) get a 5:30 head start across the start line before the Lads (the guys) are released. The first to cross the finish line wins a free beer for all of her/his fellow lasses/lads.
Typically a fun event, the 2019 venue was all about perseverance...in terms of weather, that is. Although Momma N blessed us with above-freezing temps, she was also generous with precipitation. Like any eager racer, I had been stalking the weather for several days. The chance of rain had gone from 100% (most of the week) down to 65% (the morning of)...but that all changed in the final 30 minutes before the start line. 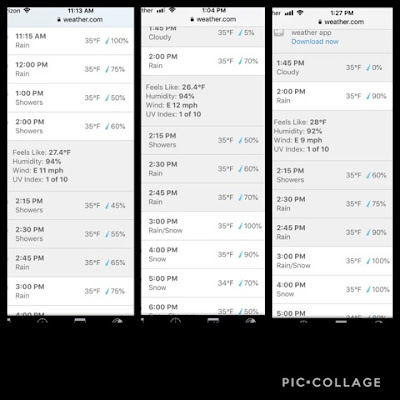 A change, in this year's event, was moving the starting time to 2:00 in the afternoon. With the iffy weather on tap, we left town at noon for the 45-minute drive to the race site, hoping to secure a close parking spot (which would allow us to cower in the car until the last minute).

Although we drove in light rain the entire way, it let up right as we were arriving. The parking lot was nearly empty, indicating a lot of others were either arriving later or were bailing on the day.

As we were walking to the start line, though, it started misting. Barb and Pat (my hubby) were planning on walking together (she is still recovering from knee surgery and the hubby had not trained much), so I made my way over to the Lasses' corral. 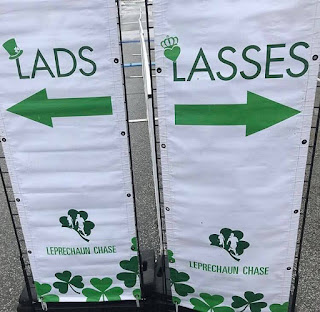 The National Anthem was played, and the Lasses were released. Right out of the gate, there were numerous puddles to dodge.

We veered out of Principal Park and onto MLK, Jr Parkway, going west (with a moderate tail wind).  Having done this race five times prior, I knew this was the trickiest mile of the day because it was flat and everyone else was running fast. It's always been a challenge to know just how fast is too fast...and I usually misjudge my pace in that first mile.

Just before the 1-mile mark, we turn south for a brief out and back segment. As I was making my way back to MLK, the first two Lads passed me. So, I'd had a 5:30 head start, and they had caught up to me not even 1.5 miles into the race.

Back on MLK, we ran a bit further, then turned south on Fleur, and headed to Gray's Lake Park. I had not looked at the course map (since I'd done this race so many times before), but there was a slight change going through the park this year. The course was routed on the paved drive (instead of the actual walking/biking trail). Not a major change, but there were so many puddles! With all the rain, the excess snow was melting like crazy and there was nowhere for all the water to go.

It wasn't until I was about halfway around the lake that I realized I had not seen a mile marker since mile 2. Again, since I'd done this race before (several times), I knew where the approximate markers would have been (even on the altered route). I was hesitant to glance at my Garmin too much with all the rain, but I did check it every 10-15 minutes or so. 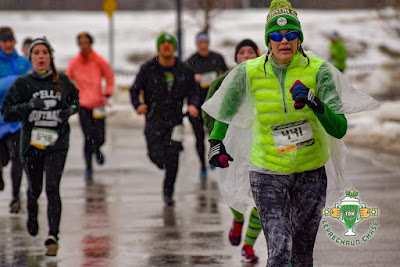 Did I mention the rain never stopped? It did lighten up a few times, but that was all Momma N was giving us. Ironically, other than my feet being a sopping mess, I felt pretty comfortable. I was wearing a flannel-lined tech shirt and a light 1/4-zip jacket under a light puffer vest and felt fine.

As I came out of the park (now going east), and started the final jaunt to the finish line (just after the 4-mile mark), I was prepared for a major headwind...but didn't feel much. I don't know if the wind had shifted or if there was enough shelter from some of the surrounding trees, but it was more calm than I had anticipated. It was a long, straight stretch, almost two full miles, to the bridge that would take us over the river and back to where we'd started.

When I crossed the river, my legs sprung into action as I made my way across the bridge. Then, it was a quick left turn for the final sprint to the finish line.

This time of year is always a crap-shoot with the weather. I've run this race in cold temps, with crazy wind, and in bright sunshine. This was the first time there's been snow piled up everywhere, and non-stop rain. And an abundance of puddles. None the less, the finish line still had plenty of action happening and there was a good-sized crowd of (wet) spectators.

It felt good to be done. I had run the entire race strong and never had any desire to walk (which is not always the case if that first mile is faster than it should be). I do think the miserable weather definitely was a factor in my not wanting to walk...I just wanted to keep going and get to the finish line.

In the six years years of running this, my finish times have been all over the place. Last year, I had a fourth place age group finish, but that's the highest I've ever placed. I know the weather kept a lot of runners away this year, but I was happy to (finally) snag a 2nd-place age group spot on the podium. My fastest finish time for this was in 2015 (54:42), and in 2016 I ran it 55:48. Both of those faster finish times had me placing 8th (in a much bigger field)....so the weather was, indeed, a factor. Had there been better running conditions, I suspect there would have been a few more gals finishing ahead of me. Oh well, as I have said before, placing is usually contingent on who ELSE shows up on race day. If you run a strong race, though, and are happy with your efforts, it really doesn't matter how your finish time compares to anyone else's. 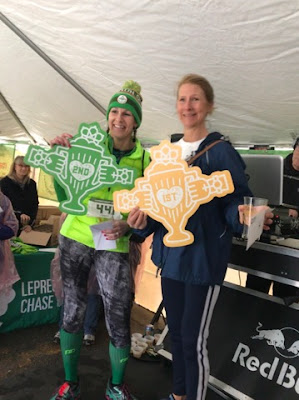 As mentioned, this race was more about perseverance than anything. I don't love running in the rain, but I can handle it. That said, rain with 39F temps feels much different that it does on a hot summer day. I walked around for a few minutes, after finishing, and stretched. I knew it would be awhile for Barb and Pat, so I went back to the car and changed my shoes and socks before walking over to the post-race party (at a bar a couple of blocks away).

This is a great event, though. The main benefactor is the Des Moines area Animal Rescue League. I'm a huge advocate for adopting from animal shelters; our little Max was rescued from a shelter, after all. Every year, the early bird registration offers an incentive....this year we were able to upgrade from a regular (tech) shirt to the pom pom beanies. Score! 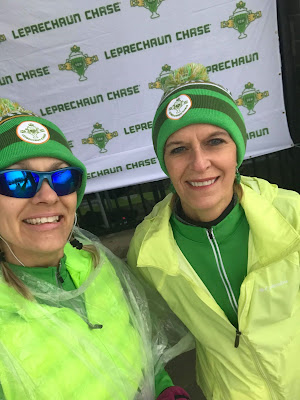 My age group award included the glass pint (shown below) as well as a free registration for next year. That's also a score. 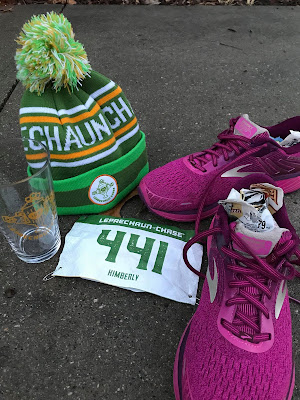 Oh, in case you were wondering...the Lads beat out the Lasses in crossing the finish line. The top Lad finished in 31:50, and the top Lass ran it in 38:12.

So, that's what went down on the rain-logged streets of Des Moines.
Have you ever run a race with a "chasing" format? Ever run a race in a cold, early spring rain?