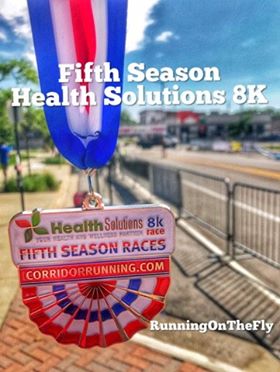 I'm all about a running a race on a significant holiday, and the 4th of July is no exception.

I love dressing for the occasion (in red, white and blue). Here in the Midwest, it's usually going to be warm, so that eliminates the stress of proper layering. Independence Day is a holiday that brings a lot of people out of hiding, so crowd support is usually a given. And if it's a new-to-me event, all the better!

Thursday, July 4th, was the date, and Cedar Rapids, IA was the setting for the 34th year of the Fifth Season Health Solutions Races. My friend, Barb, and myself were doing the 8K, while the hubby was running the 5K. The start time was 8:00 for the 8K and 8:15 for the 5K...and we were excited!

Since this was our first time at this race, we didn't know how easy the logistics would be. We were on the road by 5:45, and arrived on the scene around 7:00, with plenty of time to find parking (barely a block from the start line) and get our packets. 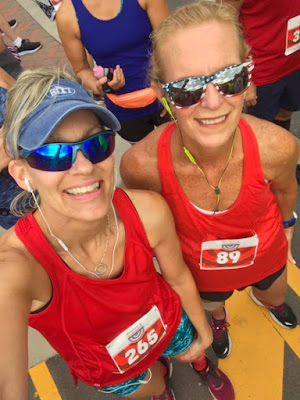 The 8K racers were called to line up at 7:45, so Barb and I headed over and found a spot in line. After an amazing rendition of the National Anthem, we were off.

A unique feature of this event was that it was the USATF State Championship race for the 8K distance. There were several elites clustered at the very front of the pack, all vying for top honors.

The first mile was very crowded, as is the case with most races. The air was warm and quite humid, but all the forecast scattered storms were a no-show...and, instead, we had plenty of sunshine.

The first mile, though crowded, went well. I didn't have any grandiose finish times in mind, but had hoped to make this race a bit of a speed workout. With the 80F temps, though, that plan was modified to just "run strong and respect the conditions."

Despite the summer heat and humidity, things didn't feel oppressive due to the intermittent shade along the race route. The race course was an out-and-back, and both the 5K and 8K racers shared the first (and final) 1.5-mile portion of the route.

I think I was just short of the 2-mile mark when I spotted the lead racers on their way back from the turn-around. Wow. Even in the heat, their speed and finesse was quite impressive.

The majority of the race took place through residential neighborhoods, and there was no shortage of crowd support. It was awesome seeing so many people along the race route, many of which were holding signs and a few even had sprinklers and hoses positioned for the runners to run through.

As I made my way around the turn-around, I felt a great sense of relief wash over me. I had been running pretty strong, and didn't really feel any fatigue (yet), but it was a pretty warm and sticky morning. It felt great to know I'd reached the halfway point.

What seemed like a short ways later, I could see the 5K turn-around up ahead. I actually spotted my husband; he was approaching the turn-around as I made my way past it. I shouted his name, and we exchanged waves.

Amazingly, I still felt really good, despite the hot temps. I grabbed a cup of water at the next water stand and walked a few steps as I gulped it down (after 14 years of running and racing, I still have not mastered the drink-as-you-run technique).

Before long, I could see the finish line in sight. I could hear the announcers calling out various runners and their hometowns. Then, I spotted Angie! She's a fellow Iowan that I actually met two years ago at Grandma's Marathon, and we've seen each other at numerous races since. Little did I know, she snapped a pic of me and (later) posted it in her stories on Instagram (aren't runner friends the greatest???).
I made it across the finish line feeling great. Well, I felt quite hot and very sweaty, but I honestly felt pretty incredible for the race I'd just run. 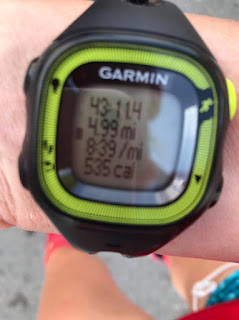 A few minutes later, I saw Barb cross the finish line. She found me right away. And, a few minutes after that, the hubby joined us.Whew!

And, my stats?
283 out of 578 (overall)
76 out of 233 (females)
3 out of 13 (age division)
After some chocolate milk and bomb pops, we headed to the post-race shindig at a nearby bar. We all received a complimentary drink, courtesy of 26.2 Brewing Company.
Some final thoughts:
This was a very well-run event. Due to some road construction, the race course had to be slightly rerouted this year, but I thought everything was well organized and the morning went smoothly. There was a lot of food and drink at the finish line, and the post-race party at the bar was a great set-up. There was an opt-out for a race shirt, so the hubby and I both took a pass. There were free race pics to download, which is a great bonus (though mine weren't that flattering). I thought the finisher medals (for both 5K and 8K racers) were nice. The age group medals are very similar, but with different ribbons, and came in gold, silver or bronze tones (with the division/place engraved on back), depending on where you placed.
I'm very happy with how the race went for me. As I said, I didn't really have any specific finish time goals, and with the heat and humidity, it was not a day for chasing any PR's. Ironically, after I did a little research (after we'd returned home), I found my 8K PR to be 43:02, from 10 years ago. I don't run many 8K races, so it's not a finish time I had fresh in my memory. The fact that I came within eight seconds of matching that, on a hot day with a body that is 10 years older...well, I'm totally alright with that, too. I did walk briefly through a couple of the water stands, so maybe I could have finished eight (or more) seconds faster...but it was a hot day. I think the water was a bit more important. No regrets.

So, that's a wrap on my 4th of July race. Definitely a race I'd like to repeat, but maybe with slightly cooler temps (yeah, if only, right?)
Have you ever done a 4th of July race? If so, did you dress in red, white and blue?


I'm linking this with Kim and Zenaida for the Tuesday Topics Link-Up
**I'm also linking this with Debbie and Marc  for the Running Coaches' Corner
Are you following me on social media?
Let's connect : Facebook Instagram  Pinterest Twitter
Posted by Kim at Running on the Fly at 10:57 PM