Biking in the Dark...doesn't have to be scary 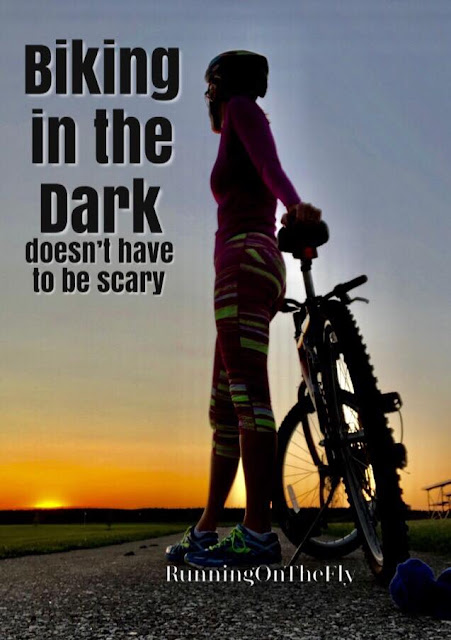 Biking...it doesn't have to just happen in the daylight hours.

With the daylight hours dwindling, there isn't a lot of natural light available this time of year. For those who work outside the home, the optimum daylight is even more scarce.

Have you ever been tempted to saddle up and ride under the stars, but were hesitant? Not sure how safe it is? Read on...


Bike riding, on a regular basis, has been a new thing for me this summer. It started as an extra cardio option for  my non-running days. It has evolved, though, into something I simply enjoy doing, no matter the day. I don't usually ride for an endurance fix or an endorphin rush, but my legs do love the extra attention they've seen from all the pedaling that's happened.
This past month or so, I've been on the bike more and more in the dark...early in the morning and (on occasion) after sundown. Similar to running, there's a true tranquility being outside, under the stars, in the peace and quiet. I've had to pull the plug on the early morning rides out to the lake...all those crazy hills were getting too freaky in the total dark (but those hilly rides are still happening, just during daylight hours on the weekends). Instead, I've been riding mainly on the city streets.

More often than not, I'm riding solo. I feel completely safe, but I realize I'm fortunate to have a pretty low-key area to do so. None the less, I have learned to take a few precautions.

Here are a few tips to consider, should you head out for a ride with compromised natural light:

Safety should be your first concern.
Just like with running (or walking) in the dark, whether it be in the early morning or twilight hours, it's always best to be aware of your surroundings. We're talking vigilance with who (or what) else may be out there. There may be much less traffic, but there could be nocturnal animals roaming about...even in town, and especially in areas with a lot of trees and brush.
Try to stay in well-lit areas.
Obviously, this may not always be possible for the duration of every ride. Even just having some of your route encompassing a well-lit area will up your safety, though. I have a couple of routes I often ride in the dark, one is a 2-mile stretch and the other is a 4-mile loop. Because they are near the college campus, there are numerous street lights and lamp posts (like every 20-30 feet). I have to do several laps, but it's well-lit, and the traffic is usually non-existent (and in the dark, no one notices me repeating all those laps LOL).

Have a light source.
It's imperative to see where you are going, and also for others to see you. Light colored (or reflective) clothing is a given, but also a headlight on the your bike (as well as a tail light) should be staples. I also wear my Noxgear vest (depending on where I'm riding) as well as Knuckle Lights on at least  one of my hands.
Know your route.
If possible, stake out your route in the daylight. Things to look for include prominent potholes or newly re-surfaced roads (which often will have crushed rock as a top layer). Remember, on a bike, you will be going faster than you would on foot, so your reaction time is much shorter. Being familiar with any potential adverse conditions, ahead of time, will have you better prepared.

Dress appropriately.
I mentioned light-colored gear, but also be mindful of your layers. With the faster speed at which you're moving, you will feel cooler than the actual air temps. That's a great thing in the heat of summer, but it does get a bit chilly in the wee hours with no sunshine. You still will be sweating, so cotton is a no-go (at least for me), but tech fabric is great. Often times, I wear a tank with arm warmers or opt for a light wind breaker to deflect some of that cool air. When the temps are wagering below 60F, I like to have gloves as well. Oh, and I recommend something over your eyes (if you don't wear glasses). Again, the cool air can sting your eyes (depending on your speed) and there will probably be a few bugs in the air (and those suckers are a nuisance if they find their way into your eyes).
A few other things to consider:
**Depending on your location, and your level of comfort, you may want to consider having a friend with you. It's always better with someone to talk to, right?
**Proceed with caution if it's recently rained. Not only will the streets be a little slick, but puddles can be tricky...sometimes a lot deeper than they appear.
**It's a good idea to have your phone with you, should there be an emergency situation (flat tire, for example).
**Finally, everyone has their own level of comfort. If riding in the dark (or near dark) is not your gig, then don't do it. There are no #badass or #fearless awards given for doing something that just does not feel right for you. 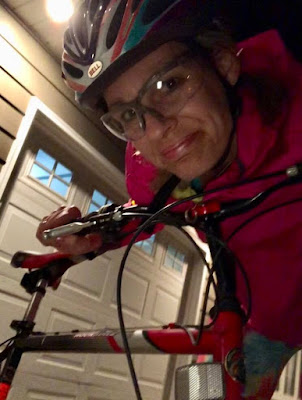 So, talk to me...  Have you ever ventured out, on your bike, if the lighting has been compromised? How late in the fall season do you ride? Would you prefer to ride in the mornings or evenings?