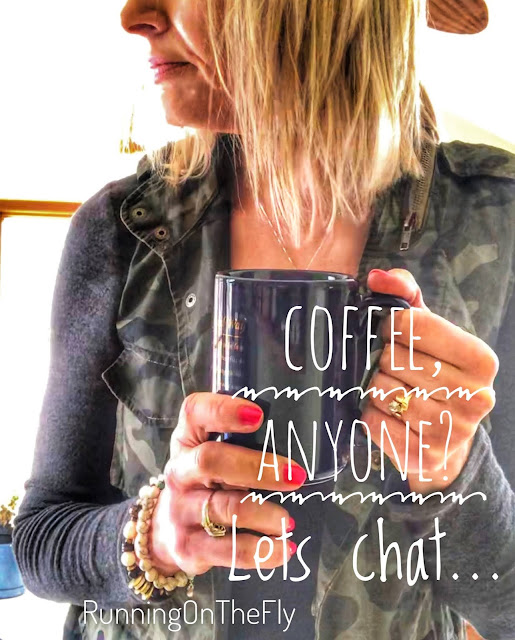 Anyone else (still) craving a hot beverage, though the temps are (slowly) rising?

Even though Spring is in the air, that air is still feeling a bit cold. Thankfully, the snow is mostly gone and the bulk of the residual mud has dried up. We've even had quite a bit of sunshine! But, those 30mph wind gusts Thursday afternoon? A big "No Thank You" to those.

What say we gather, warm beverages in hand, and chat for a bit?

If we were having coffee, I'd share my March goals. Believe me, they're nothing grand or far-reaching, but they're there to keep me accountable and consistent. My March objectives are similar to those from February, but a bit fine-tuned. The 20/20's (20 stair flights/20 push-ups) will be continuing, but mostly on alternate days. The 20 stair flights (on-the-daily), though, will continue. The Fight for Air Climb isn't until March 29th, but I need to maintain my stair-training endurance until Climb day. Also, I've been neglecting focused ab work lately, so I'm committed to doing a few minutes (at the minimum) of that each night before lights-out. So far, so good. 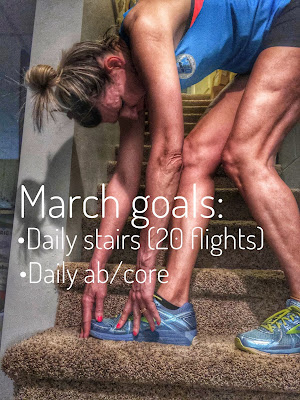 If we were having coffee, I'd express my frustration and impatience with the weather. Yes, it still (technically) is Winter for a few more weeks, but why is it so cold? There have been a few unseasonably warm days - and I have been over-joyed with those - but I'm just ready to move on to much warmer days. Isn't it crazy how (all of a sudden?) the mid-upper 30F's temps feel cold? Granted, those temps ARE cold, but just a couple weeks ago they felt much more comfortable than they do now. Or is that just me? 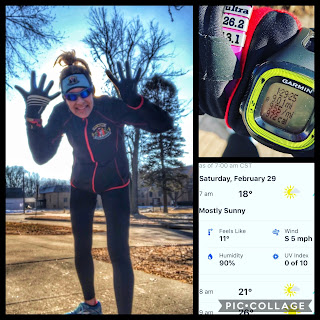 If we were having coffee, I'd tell you about my first 2020 speed workout. With Spring racing about to commence, I thought it a smart move to bring back some speed-training. Thursday morning, around 6:00, was my first official speed session since the marathon (MCM, late October). I have a favorite expanse of sidewalk, on the college campus, that I have used many times. It's about a 1/2-mile from my house, so that gives me a great warm-up/cool-down distance. The sidewalk is 2-city blocks in length, so roughly 1/5 of a mile. Intervals, back and forth, for a total of 10 (repeats) will net me two cumulative miles. All went well at this first session, but yeah. Speed-training ain't easy; if it were, everyone would be doing it, right?
If we were having coffee, I'd tell you about Gustavas. Remember him? My bike? We became BBF's (Best Biking Friends) last summer, but he's been in hibernation (also since MCM). We had warm temps last weekend (well, for Iowa, upper-40F's, in early March, is warm), so I thought that would be a perfect time to go for a ride. We only went five miles, and I had a fleece headband under my helmet (and thick fleece gloves on my hands), but the ride felt great! I had forgotten how good those rides felt on my post-long-run legs. I'm already looking forward to more time with Gustavas as the spring running ramps up. It's a given we'll be spending a lot time together this summer when my Air Force Marathon training gets underway (in July). 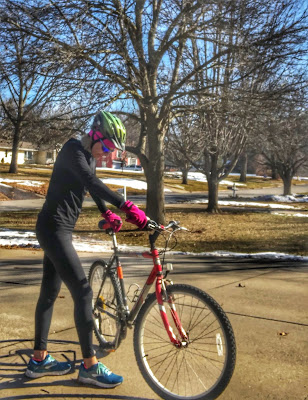 If we were having coffee, I'd be shaking my head at what Momma N has in store for me next week.
In my Tuesday/Wednesday post (Marching and Racing into the Spring), I shared a few details of my Pi Week Challenge. Well, it is already looking like it will be more challenging than I'd have bargained for, and it hasn't even started yet. The daily running isn't such a big deal (I'll be doing 3.14 miles every day for the seven days leading up to my Pi Day birthday), but the impending weather is looking a bit on the bleak side. Dear old Momma N (currently) is forecast to share some rain with me for three of those seven days. Nice of her, don't you think?
And, finally, if we were having coffee, I'd tell you about the first robin I spotted this week! He (she?) is kind of hard to notice among all the branches, but it always feels more like Spring when the robins are out and about.
Anyways, that's it for me.