Marching and Racing into Spring

March 2020 is gonna be a busy and fun month for this runner!

There's some traveling on tap. A new state to check off. And my favorite non-running event will be  the culminating crescendo.

Care to hear what's on the roster?


This coming weekend, the hubby and I are traveling to Omaha, NE for the Leprechaun Chase.  This 10K is one of the funnest races we do every year, only this year we're doing the Omaha venue instead of Des Moines. It's kind of a long story, but the Des Moines event isn't happening this year, so the race organizers gave me a free registration to the Omaha Chase (which had been an AG prize from the 2019 Des Moines Chase).

The Leprechaun Chase is actually, just like the name implies, a chase! The Lasses (all the gals) get a 5-minute head-start across the start line before the Lads (all the guys) are allowed to take off. Hence, the Lads chase the Lasses and the first to cross the finish line earns a free green beer for all their fellow comrades. Rumor has it the Lasses have won every year in Omaha, so it will be interesting to see what happens this Saturday. I've heard the course is pretty hilly, so that will be a big change from the relatively flat one I've run in Des Moines the past several years. Also, this will be my first-ever time running in Nebraska, so I'll be able to add that to my Destination Excursions page on the blog (above). 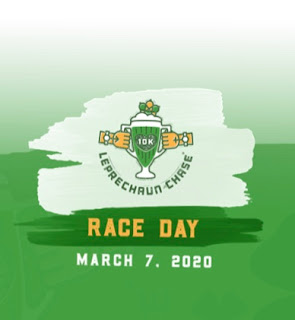 My birthday is March 14th. Yes, I'm a Pi Day baby. I was a total math geek when I was a kid, so I really would have embraced the 3.14 significance of  my day of birth, but it's only in recent years the "Pi Day" thing has gotten any attention. Anyways, something I'm considering is doing a Week of Pi Challenge...running 3.14 miles (essentially a 5K) everyday for a week (Sunday, March 8th through Saturday, March 14th). I've done running streaks many times, but I've never attempted a 5K streak. Rest assured, I do not plan to run any of these Pi runs fast. Like all of my other streaks, it's more for the challenge of doing the daily runs than it is for setting any PR's while doing so. And, it's only for a week. I always do a Pi run on my birthday anyways, why not have that be the grand finale?

Also on the agenda is Spring Break. The hubs and I will be spending several days in the Tampa, FL area, and I've found a race to do while there (isn't that what most runners do?). It's the 39th annual Driscoll's Strawberry Classic. I'm registered for the 10K. Fingers crossed, let's hope the weather will be seasonal.
On Saturday, March 28th, I'm returning to the Chocoholic Frolic (in Iowa City). Last year was the inaugural event, and it was a lot of fun on a very windy spring morning. There is a 5K or 10K option (I'm doing the 10K) and I will be defending my 1st place AG honors from last year. If all the stars, moons, and planets align, I'd like to try for a PR. If anyone is interested in joining me (or doing another Chocoholic Frolic event), CHOCKIM will save you $10 off your registration (check out their site HERE).
Lastly, the very next day, is the Fight for Air Climb (in Des Moines). Everyone knows this is another favorite event of mine. I've climbed in Des Moines in 2013, 2014, 2015, 2016, 2017 and 2018, and also in Chicago in 2014 . I've been doing all kinds of stair-training, since the last week of January. And just this weekend, the youngest daughter decided to join me! It's bound to be a fantastic morning on the stairs, as we raise funds for the American Lung Association. I climb to honor those who have successfully quit smoking, as well as the many others who are still battling that fight and/or dealing with lung disease. I'm also climbing in memory of my late mother-in-law, who suffered from COPD in her final years. I do have a fundraising page (HERE) if anyone would like to support my efforts.
Well, that is what's on tap for March. There's even more happening in April (ahem, back-to-back half marathons and a 1-mile race, for starters). Stay tuned!

How's your Spring calendar shaping up? Any big races happening? Any new events you're running for the first time? Are you ready, and as excited as I am, for some racing bibs and finish lines?