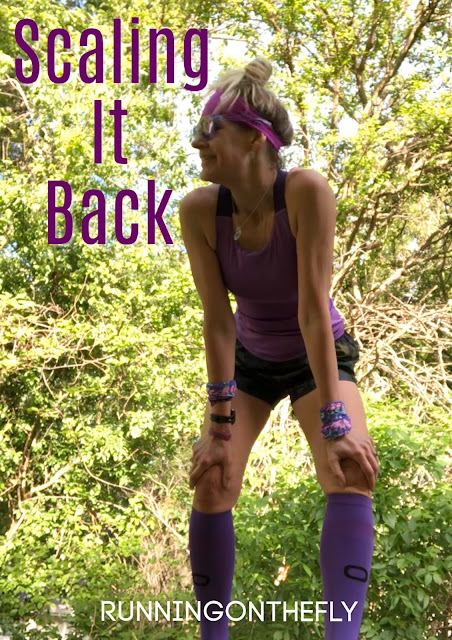 I was due for a scale-back.
So I took one last week. No frills. No guilt. No regrets.
Have you ever taken a scaled back week? I know most of us talk about them, and we all know we need them...but, let's be honest. They are tough to commit to.
But, first of all...welcome to the Weekly Run Down!
I love hosting this link-up with Deborah (from Confessions of a Mother Runner)! If you write a fitness-based blog, you're invited to join the party. The link-up opens at 1:00 (EST) on Sundays and remains open through noon on Monday. We love reading about everyone's weekly fitness endeavors, training highlights (or low lights) and race recaps. We ask that you link back to both hosts, and we encourage you to read/comment on the other linked blogs as well...please don't link-drop & dash ;-)
Anyways, here's what went down in my little world of (scaled-back) fitness this week:
Monday - never-miss-a-Monday (especially on Memorial Day)
Something I've meant to do, then forgotten every year until after the fact, was register with Wear Blue: Run to Remember. In doing so, you're assigned a fallen hero to run in memory of on Memorial Day. Well, this year, I remembered to register. I received two honorees ...USMC Cpl. Terrence C. Allen (KIA, Al Anbar Province 9/15/07) and USAF Sgt. Dylan Jasso (KIA, Kabul 11/27/18) . Since I felt these two gentlemen deserved my undivided attention, I elected to postpone my (usual) 5K time trial until later in the week. Besides, I didn't want any music in my ears, nor my Garmin buzzing on my wrist. The 5K route I'd chosen took me out near the edge of town...and although I'd seen this mural many times before, it caught my attention on Memorial Day.
Take-it-easy Tuesday
Okay, remember that commitment to a scaled-back week? It actually didn't start until Tuesday because I snuck in a Murph workout in Monday's early afternoon heat (see below). I woke up with a few Murph DOMS (my pecs were on fire, and my shoulders were "smoldering" a bit as well). The hubby and I took Max out for a couple miles of walking before work, and that (along with more walking later) sufficed for the day. 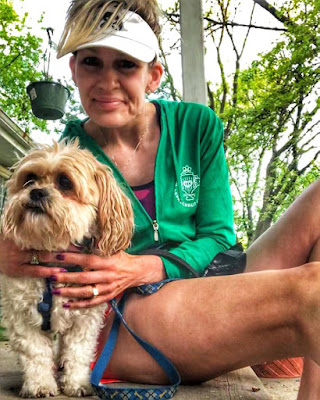 #10at545 Wednesday
Amazingly, I never had any DOMS from all the Murph squatting, but I still wanted to keep things on the down-low. Instead of our usual #5at5 (5-mile run at 05:00), Barb and I met up for a #10at545 (you know, 10-mile bike ride at 05:45). Have I mentioned how much I adore the sunrise? Well, let me assure you it looks just as glorious on a bike as it does on foot. And, my legs appreciated the low-impact cardio, courtesy of Gustavas. 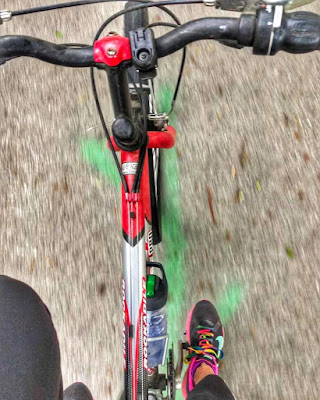 Beat-the-rain-Thursday
Although things were feeling great (even my wonky left hip, that's been a little out-of-sorts recently), I fought the temptation and kept the running shoes out of reach. I'd planned on doing some elliptical time, but when I saw there was "only" a 40% chance of rain (instead of 95%, as had been forecast), I laced up and headed out for a 2-mile walk instead. What would you have done? BTW, the rain came shortly after I'd arrived back home and continued most of the day. 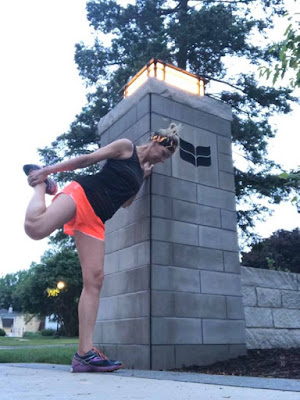 Friday's Postponed UN-Canceled 5K
As mentioned, with Monday's Wear Blue: Run to Remember run, my UN-Canceled Project 5K  got moved to Friday. As per usual, I ran a 1/2-mile to the "race site" as a warm-up (and then back home, afterwards, as a cool-down), got my GPS signal, and took off. A lot of things were different with this run...the time of day (I'd done all the other 5K time trials after work, except for one that I'd run over lunch), the nearly perfect weather (umm... temps in the low-50F's and nearly no wind), and my attitude. The previous week's 5K had been a major struggle bus endeavor, so this week's goal was to simply run strong and not think about my mile splits (and hopefully beat last week's time in the process). The 3-day sabbatical from running had given my wonky hip enough downtime to feel better (though, still a bit stiff). Thankfully, this run felt nearly effort-less and I was able to sub-27 (which is my usual 5K "benchmark"). Mission accomplished. The theme of JOY was most appropriate. 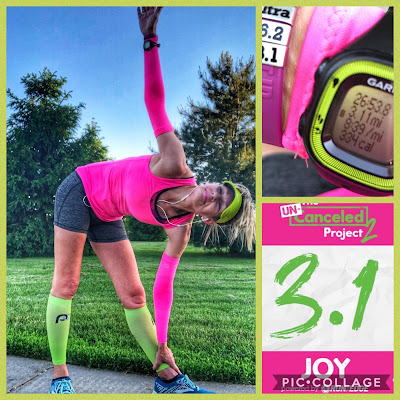 A (somewhat) long run Saturday with a virtual 5K sandwiched in
Thanks to Darlene, I'd won a free registration for the Freihofer's Run for Women virtual 5K (and it was fun running "together" virtually with her and Debbie and Cari). I was eager to get a decent "longish" run in as well. Barb and I met at 6:00, and ran a couple miles. I reset my Garmin for the 5K, saved the "race" (for submittal), then we continued on for a total of eight miles for the morning. I joked that my body was in a "5K hangover" state (you know, those DOMS that we all know and love) from Friday's early morning tempo-ish jaunt, so things felt a bit sluggish. Later, I had a couple of hours of intense garden squats on the agenda and the hubs and I went for a 7-mile bike ride before dinner. Believe me, when I runfess, my body was tired. 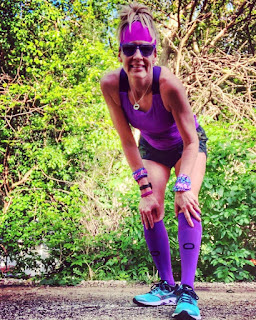 Sunrise-sensational Sunday
Another sunrise (recovery) adventure was in order, and the hubby came along for the ride (literally). Wow. I'm thankful my body likes the early mornings because I'd be missing some beautiful #artgeek moments if I slept-in. Max was waiting by the front window when we returned from our 10-mile ride, so we harnessed him up and took him for a 2-mile walk. I have another afternoon of garden squats on tap, so don't be jealous. 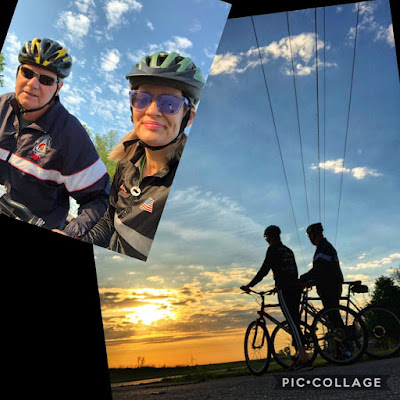 So, a scaled-back week (in terms of running), but still plenty of low-impact stuff happening. The running miles were conservative (17) and walking miles were capped out at 22. Strength training was focused mainly on Monday's Murph workout, but I did add in a short upper-body workout Saturday evening. And let's not forget biking! Gustavas and I pedaled 27 miles this week.
In case you missed out, here's what went down on the blog this week:
Switcheroo, Anyone?
Summer Running Hacks? I got a few...
A Mayhem of 'Fessing
In other news:
Friday Fashion Flair! This week's featured outfit included all things black and white, as well as a splash of kelly green, a color we don't see very often. It's hard to see in the pic, but the shirt has rouching on both side seams, which gives it a lot of detail as well as a flattering fit.That's a definite win-win in my book.As always, you're welcome to join me on Fridays...post a pic on Instagram, grab the hashtag (#FridayFashionFlair) and be sure to tag me (@runningonthefly). 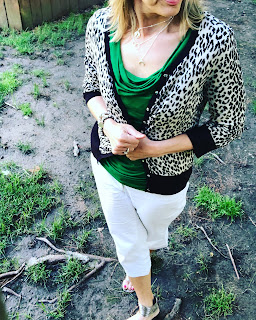 A new thing I have been doing is laying out my "Long Run Preview" on Friday evenings. Similar to a Race Day Preview (or a "flat runner"), it's a chance to celebrate the weekend running (since there's no real racing happening for any of us). Most of us are doing long runs, so why not have a little fun with it? 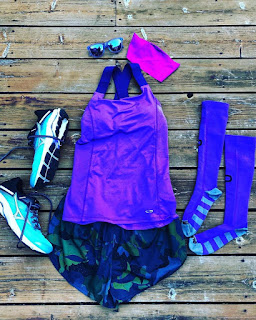 All the Memorial Day Murph FOMO got to me. I'd done the Murph Challenge last year, (recap) and unofficially committed to doing it every Memorial Day going forward. With my scaled-back week already underway, though, I was going to let it pass. Besides, the CrossFit gym wasn't open (I know, #excuses). The more I thought about it, though, the more I felt compelled to do the workout anyways...so I decided to do a modified version. I ran both the 1-mile run before (and after), but did half of all the reps: 50 (modified) pull-ups (instead of 100), 100 push-ups (instead of 200), and 150 squats (instead of 300). And, I did all of this, outside, in the 85F (feels-like) temps, in my backyard (because, why not?). I timed myself (only because that seems to be the protocol), finishing in 43:04, and was amazed that I managed to run my last mile 30 seconds faster than my first (though it certainly did NOT feel like it at the time). Oh well, at least I opted to not wear the 20-lb weighted vest LOL. 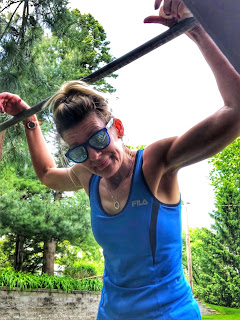 Finally, I'm not going to elaborate on the events of this week. I'll just say that I'm sickened and heartbroken... not just by what happened in Minneapolis, but also by what's continued to happen in the aftermath. I'll continue to pray for peace, respect and justice for everyone.
So, that's another week all wrapped up. May is (almost) history, and June is knocking at the door...and I'm ready for summer!
How did the final week of May play out for you? Any tribute runs for Memorial Day or virtual races happen? Upcoming summer events? Are you as eager for summer running as I am?

Click here to enter
Posted by Kim at Running on the Fly at 9:20 AM