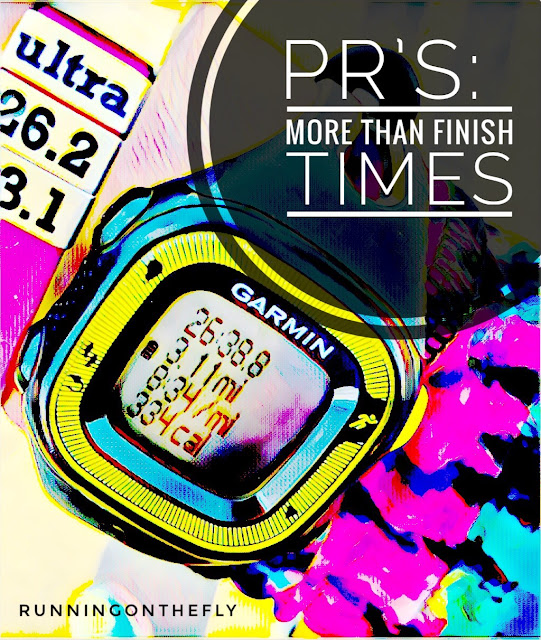 Shall we chat about PR's?

Not necessarily to brag or boast, but to celebrate our successes?

After all, PR's (Personal Records) don't just happen. They are the result of work, dedication, and  (often times) heartache. There's also the requisite blood, sweat and tears (both literally and figuratively). And, best of all? They're personal...they belong to YOU and you alone.


Anyone who has known me for awhile, or read my blog, knows I went through a pretty long plateau with no PR's happening. Granted, I still had some decent (for me) finish times, and some age group awards...but PR's eluded me for a long while.

I have some theories on why the PR's weren't a regular occurrence:
*I wasn't training specifically for a PR (in any particular distance). I enjoy doing races of all distances, so I have never really trained exclusively for any "one" specific race. I usually have a few important races (like a favorite 13.1 or a 26.2 event), but I usually filter several other races (of various distances) in and among the training.
*I was no longer a "new" runner. When one first becomes a runner, there's a trial and error period where the runner is learning various running routines, schedules, and (possible) racing techniques. It's a given, there's no way to go but up...so there usually are a lot of  faster finish times happening in the early stages. The thing is, it's never black and white, nor is it an exact science. Just when you think you have mastered a certain distance, it's common to go on and try a longer distance...which may involve different training or potential injury.

*There were some injuries along the way. I battled piriformis syndrome for several years. There also were two incidents of plantar's fasciitis (once in each foot, but in different years).
*More than likely, I was doing too much racing. I don't "race" each event with 110% effort, but I do a lot of races. Even "racing" with caution, there still isn't a lot of downtime for one's body to recover. Personally, I'm alright with that because I'm not a type-A, competitive person. And, did I mention that I love racing?

*Finally, although I have always been an advocate for cross-training, I probably wasn't doing enough of it. In recent years, though, I have upped my stair-training and have gotten creative with HIIT workouts. I learned to like burpees (most of the time) and planking has taken on a life of its own. And, I have been walking (almost) daily, especially on my non-running days.
I have always erred on the side of caution, and have kept my mileage at a moderate level. But it wasn't until my forced 3-month sabbatical (summer of 2017) that things took a turn for the better after I rallied back. In 2018 (and especially in 2019), I started hitting faster finish times than I'd seen in recent years. Being forced to sit out while my knee healed really enabled me to see the big picture. When I returned to running (and eventually racing), I had a renewed sense of gratitude and haven't taken anything for granted since.

Ironically, I believe the simple act of running more for the pure joy of it (rather than for a quest of running "fast") has actually made me a faster and more efficient runner. Granted, I have been doing more consistent speed work than in previous years, but my workouts aren't crazy tough nor do they involve an extensive time commitment. Alas, I have finally found, quite by accident, what works for me, and I have remained injury-free for the most part. Too bad it didn't happen sooner. 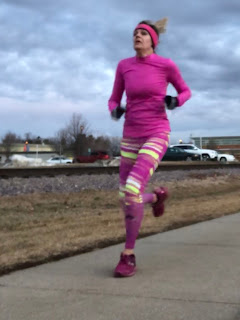 Anyways, I give you my current list of PR's:

I realize my PR's mean more to me than they do to anyone else. I don't expect any accolades, praises, or high-5's...but I do appreciate all the support I've been given. I also respect that I've drawn on the inspiration of others, and am quite grateful to have such an extensive support system of friends, family, fellow bloggers and the running community.

As you can see, some of these PR's are pretty recent, and some are long-standing. Who knows what could change, or what will remain the same. There's certainly not any races in the immediate future to test the waters. That's not gonna stop me from lacing up and hitting the streets anyways. When the racing resumes, I plan to be ready.


How do you feel about PR's? Are you driven to achieve them? Do they mean as much now as they did in earlier years?

I'm linking this with Kim and Zenaida for the Tuesday Topics Link-Up
I'm also linking with Debbie,  Rachel, Deborah, Lisa, Sandra and Jenn for the Runners' Roundup 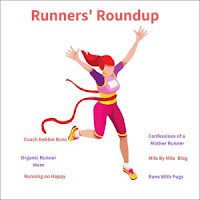