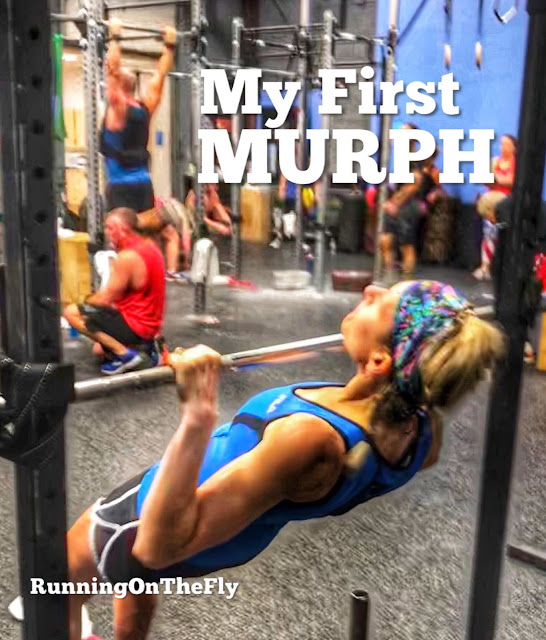 I'm always up for a challenge.

I'm also a proud American with an overwhelming amount of patriotism, and have a strong tie to all things military.

I'd first heard of the Murph a year ago, and had kind of forgotten about it. Then, with it being Memorial Day Weekend, I started seeing all sorts of pics and posts about it. Not one (usually) to sit quietly on the sidelines, I wanted in.

As luck (or Fate?) would have it, a local friend, who just happens to be a CrossFit fanatic and instructor, extended an invite to the annual Murph workout at our local CrossFit gym. End of story.

The hubby and I didn't need to be asked twice; we both knew it was something we had to do on this significant holiday. 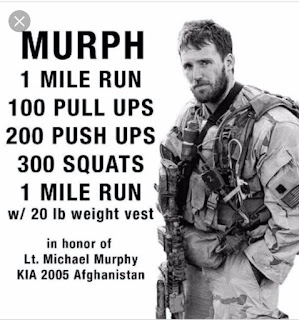 Briefly, Navy Seal Lt. Michael Murphy risked his life as he radioed for help in the mountains of Afghanistan (2005). This workout honors him, as well as all fallen heroes of uniform, and is a popular WOD (workout of the day) for CrossFit enthusiasts over Memorial Day Weekend. 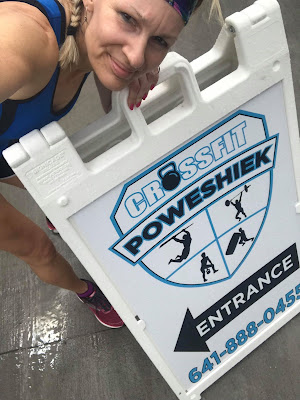 The hubby and I arrived at the gym, and were immediately greeted and welcomed by several seasoned CF athletes and by Bill, our friend who is also one of the instructors/coaches. I was a little apprehensive, having never worked out in this kind of environment before, and the thought of 100 pull-ups was scary. Bill assured me this was all about working out together, and having fun, while honoring our fallen heroes. It was not about competition (though I later learned that participants usually record their finish times as a means of achievement).

Bill went over the three basic exercises we'd be doing (pull-ups, push-ups and squats), and lead the group in some warm-ups and a short jog outside, around a few of the city blocks downtown. He recommended breaking down the reps into smaller groups (for example, sets of 10/20/30). He also highly encouraged modifying the moves to allow for full range of motion instead of succumbing to bad/compromised form as our bodies fatigued. Oh, and there was the option to do all (or some) of these with a weighted vest!

After a few minutes to set up our stations, we all headed outside for the 1-mile run. Earlier, we'd had a few intermittent rain showers, but (at that particular moment) the rain was MIA. I made it back to the gym, used the restroom, and headed over to the pull-up bar.

Ugh. I'm not afraid of push-ups (though I've never done 200 of them in such a short time span), and squats are a no-brainer (even with the high quantity on tap). But the pull-ups were fricking scary to me. Bill had demonstrated using the (approximate) waist-high bar and angling one's body underneath. I assumed said position, and was able to do 15 pull-ups pretty easily! Granted, these were considered "assisted pull-ups," but they were pull-ups none the less. Feeling much more confidant about the pull-up situation, I got up and let the hubby have his turn. 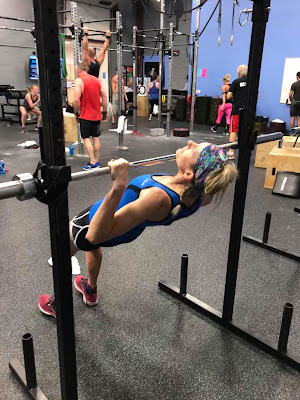 As he was doing his reps, I got down on the floor and did 20 quick push-ups. With the humid air, the crowd of Murphers (there were 25-30 of us) and the large garage door open (for air flow, I assume)....it was pretty warm. I was already breaking a substantial sweat. 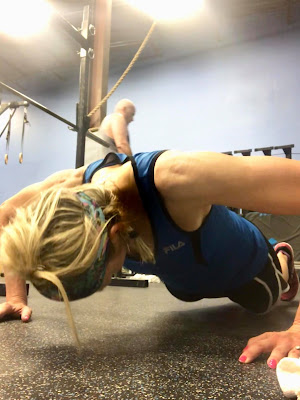 Next came the first set of squats. After doing the pull-ups and push-ups, "simple" air squats never felt so easy. 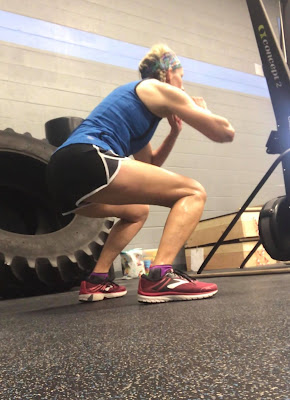 I did another set of assisted pull-ups, and could already tell they were feeling a bit tougher. The next set of push-ups were alright, though. The squats were still feeling somewhat easy, but I had a major sweat going. I grabbed my water and drank several sips as I walked around and searched for a couple of towels.

It was refreshing to see such a mix of ages and skill levels, yet everyone seemed to be in sync as they did their own respective things. I was surprised more weren't wearing the #badass weighted vests (I think about 10 people were, some women and some men). It also was reassuring to see how many were modifying the moves, and these were experienced CF folk....proof at just how tough all these moves were for all of us, especially as the morning wore on.

As the workout continued, (as predicted) the moves got more challenging. I could tell my pull-ups weren't as smooth and fluid as they were when I started. The push-ups were progressively getting harder, so I did some on an incline and some on my knees. The squats were still the easiest move, but even they were feeling more strained. And the perspiration was draining out of me like a faucet.

Since I have a 20K race happening on Saturday, I decided it wasn't in my best interest to do all 300 squats. Even though I was varying the kinds of squats (sumo, standard, etc.), 300 was a pretty aggressive number, even with several days to recover before my race. I decided to call it good at 150.

As for the push-ups, I tried varying those as well, but my shoulders and arms were really starting to hurt. I'd made it past the halfway point (which was 100), but after the next 30, I white-flagged those as well.

Ironically, I was able to finish out the 100 pull-ups, though. Yes, they all were assisted pull-ups, but for a gal who has never really been able to do a single "perfect" pull-up, I'm pretty pleased with what I accomplished on that pull-up bar on such a hot and humid morning.

I wound up running the final mile on one of the treadmills. Yes, you read that correctly. The hit-and-miss rain decided to make an appearance as I was going through my final set of reps. Although the rain probably would have felt great on my already saturated body, I opted to just keep it inside and finish on the 'mill.

Since I didn't realize people were timing themselves until after the fact, I'm not sure of my exact finish time. I know it was less than an hour, though...probably in the 50-55 minute range. I'm totally pleased with that.

Some final thoughts:
***The Murph is tough (as it should be). It's not meant to be an easy, uneventful WOD (as if they exist LOL). It's a challenging endeavor, but not impossible.
***Although I'm not really into CrossFit, I am familiar with the format and some of the moves. It was nice to see that I could hold my own among all the others there.
***I really appreciated the supportive environment. Although I already knew several of the people there, I was still the token "nonmember." That said, I never felt like an intruder. Numerous people came up to me and encouraged me throughout the workout, and fist-bumped (and congratulated) me after we'd finished.
***Even though I didn't complete all 200 push-ups or all 300 squats, I still feel like a champion for what I DID accomplish. Had I not had the upcoming race, I probably would have pushed on and tried to finish everything. I just didn't think it was worth the risk this time, on my first Murph attempt.

If you'd like more information on the Murph Challenge, you can check it out HERE...

So, that's another bucket list thing I can mark as done (but, truthfully, now that I've done Murph once, I can see myself doing it every year).

Have you heard of the Murph Challenge? Would you ever consider doing it?