Running Against the Wind - Market-to-Market Relay 2019 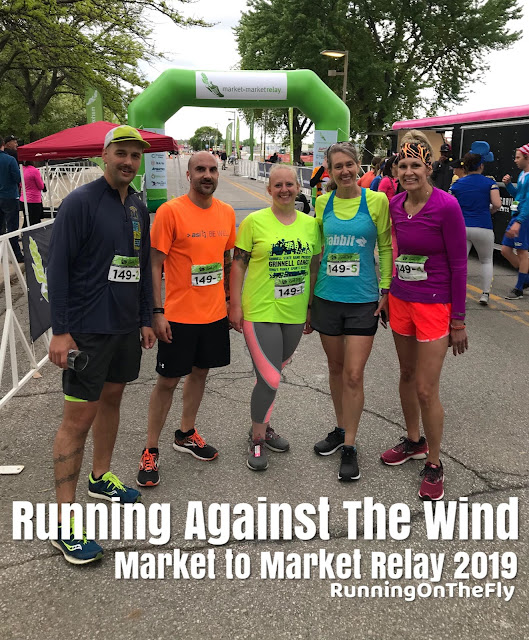 We were running against the wind. All five of us. All day.

But, hey, at least we outran the rain!

Such was the day for our team at the 2019 Market to Market Relay on Saturday, May 11th. The temps were chilly (it never got warmer than 55F), the air was damp, and the wind was brutal. That said, it still was a fun adventure in our five sets of running shoes.

Our day started with a 4:45 a.m. departure from our company's parking lot to make it to the start line for our 7:15 a.m. wave start in downtown Jefferson, IA. Of course, we had to swing through a Starbucks in Des Moines while en route.
Similar to a Ragnar relay (but on a smaller scale), M2M incorporates an approximate 76-mile route with teams of 6-8 runners. There are 18 exchange points along the course where the teams rotate runners and swap out each team's running batons (in this case, each team has a slap bracelet). 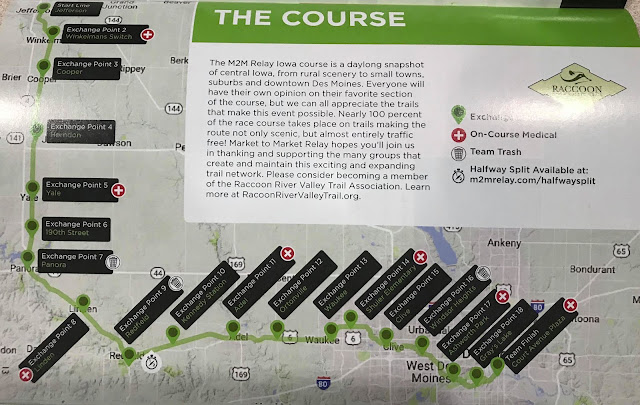 There are staggered waves for start times, beginning as early as 5:45 a.m. to accommodate the 352 teams. Each team is comprised of 6-8 runners, and there are various team divisions based on gender, age, co-ed, collegiate, and corporate. Many of the teams have their vehicles decorated and the runners are in costume. It's quite an event!

We arrived around 6:50 in downtown Jefferson, giving us time to grab our team baton (prior to the start line). We took a few pictures and Ashley, our first runner, had a few minutes to warm-up before the ceremonial trombone serenade from the pink gorilla (the mascot of the sponsoring company, Pink Gorilla Events) as the starter gun was fired.

I was the fourth runner, so my first leg wouldn't be happening for a couple hours, giving me plenty of time to stretch, eat and change into the rest of my running gear. Mind you, there isn't much downtime between the running legs, since we have to drive ourselves to each of the parking spots near the exchange points.  The runners are on a paved trail (for most of the course), but the vehicles are given maps (with detailed directions) to follow. 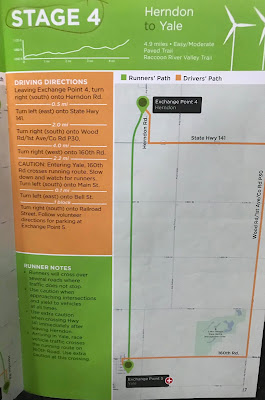 Before long, it was my turn to lace up and hit the trail, literally. Ashley and Ryan had both finished their first legs, and Nick would be coming in soon. There are volunteers, stationed about 1/4-mile out, with walkie-talkies watching for the runners, and then announcing the bib numbers to alert each team's "on-deck" runner that their teammate was approaching. I had planned on wearing a tank top with arm warmers, but opted to wear an additional long-sleeved shirt (layered over my tank) because it was so cold and windy.

As you can see from the elevation chart (above), most of Station 4 was a gradual uphill endeavor. There was a steady headwind, as well. A lot of the route was out in the open, but there were a few spots with patches of trees which gave me a brief wind block. I was relieved to see the familiar green banner flags, signaling my approach to the Station 5 exchange point. Before long, I was handing off to Kristin, and I was done. I wasted no time in grabbing my blanket as we jumped back in the van, and headed to the next exchange point.

As the morning wore on, the weather remained the same...cold, windy, and cloudy. My next leg would be Station 9, which is one of the legs I ran last year.
I remembered this part of the relay as being pretty scenic (with a few bridges going through the woodland), but not very flat. The hills were not steep, by any means, but I was constantly either on an incline or recovering from one.

I don't know if I was dehydrated (doubtful, since I had been hydrating all morning and the weather wasn't the least bit hot), hungry (though I'd eaten a couple of peanut butter/raspberry jam rice cakes mid-morning, as well as a couple Medjool date bars), or if I was feeling the effects of an earlier-than-usual wake-up. I felt like I kept a steady pace, but I struggled with keeping my head in the game. Again, I had a constant headwind to fight (until the final couple miles, when there were more trees along the route), so I knew that was a factor. When I finally made it to the 10th exchange point, and handed the baton to Kristin, it was all I could do to stay vertical. I didn't feel nauseous, but I definitely felt light-headed and all-out exhausted.
Stage 9 - 4.68 miles --> 43:01 (9:12 pace).
Splits were 8:45 / 9:05 / 9:26 / 9:21 / 6:24 (final .68)
An especially tricky aspect about an all-day relay event is timing of when to eat. My first leg was mid-morning (around 9:30), and my second one was just after lunchtime. My third (and final) leg would be late afternoon. All of our running times are approximate guesses, based on when each runner predicts they will finish their individual legs. All the legs are different distances, so knowing an exact pace is a bit of a crap shoot. That said, it's a challenge feeding and fueling oneself at an opportune time. I'm not hungry immediately after running, but if I wait too long to eat there's a risk of an angry tummy on the next running leg.
Finally, it was time for my final leg, Station 14. Did I mention it was a windy day? And chilly? Although this final leg had an overall downhill grade, it also was my longest of the day.

No doubt my body was feeling tired (after all, by this point I had been awake for a solid 12 hours), so the big downhill start was most welcome. The running route was on a sidewalk, and shortly after my start I heard a car horn, and all my teammates waved as they drove by. It didn't seem like I'd gone very far when I heard my watch beep...and I saw 7:17 flash on the screen. I didn't know if I'd hit a random button by mistake and messed with the settings, but I doubted it had been an entire mile (?). Unsure of my watch's accuracy, and afraid to hit any more buttons (and mess things up further), I left it and accepted I'd not know my exact distance  (hold that thought).

Shortly after what I'd thought was the first mile, the route turned onto a paved trail. We'd been warned to watch for route markers because there would be a lot of side trails (that were to be avoided). For the most part, I was on my own. I'd see an occasional fellow runner up ahead, but there was not a lot of passing happening (on my part or others'). The route ventured back into a residential area for a mile or so, only to veer back into another woodland trail. Every time the route turned, it felt like the wind shifted with it and there was a constant headwind in my face. I had not walked all day, but finally, in the final couple miles of that final leg, I gave in.

The route information had said this leg was 5.3 miles, and with my wonky watch, I wasn't sure exactly how far I'd gone. My watch had been beeping, though, at what "seemed" to be evenly-spaced miles (even after that first odd 7:17-minute beep). It wasn't until my watch showed 5.6 miles, though, that I cleared the exchange point, at Station 15.
Thankfully, I didn't feel as exhausted as I'd felt after Station 9,but I definitely was glad to be done running. I wasted no time in checking off the final box on our mileage chart. 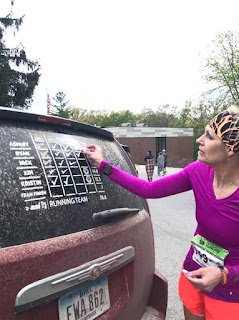 Although I was done, everyone else still had a final leg to run as we worked our way to the finish line. As is tradition, all teams rally near the finish line, and wait for their final runner to come in... and then run the final .1 mile together, as a team.
I seriously cannot say enough good things about this event. Granted, the weather was a major buzzkill, but at least we didn't have any rain. The organizers do a top-notch job with all the pre-race emails and social media posts.
In lieu of medals, every finisher receives a glass pint with the event logo (which changes each year). Each runner also receives a gender-specific tech shirt. And, as one can guess, there's lots of fun to be had throughout the day as we navigate our way through some of Iowa's finest back roads (yes, U-turns are pretty commonplace). 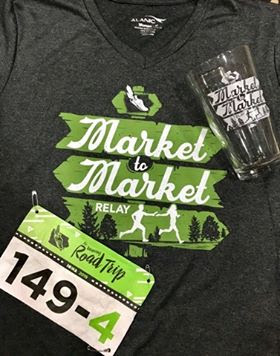 A new thing our team did this year was to "mysteriously" leave magnets on other teams' vehicles. We represent a signage company, after all, why not do a little networking? 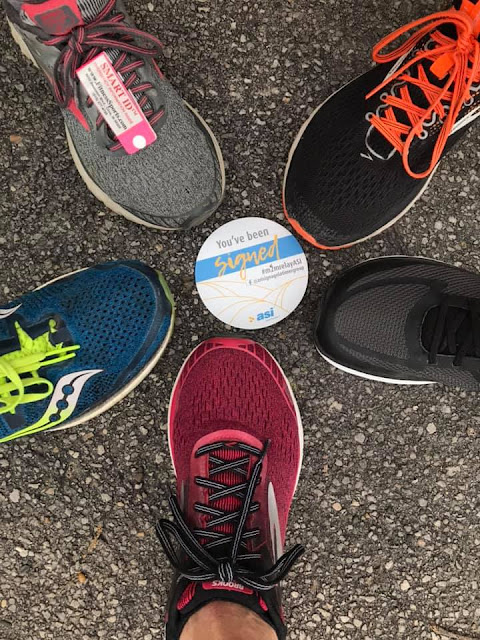 A few notes:
--Our 2019 team originally had six runners, but an angry achilles prevented our sixth runner from joining us on race day. In light of one less runner, our team "matrix" had to shift slightly, and a few of us had to take on some extra miles. Not a big deal.
--This was our team's sixth time (of the seven years of the event's existence) participating. This was my fourth time participating (I also was there in 2014, 2017 and 2018). It's fun seeing many of the same returning teams every year.
--With 18 total legs of the relay, and differing team matrices each year (depending on how many runners we have), there still are several individual legs of the route that I have not yet run. That makes for a fun "new" adventure each year, for all of us.
--Most of us bailed on the push-ups at the final exchange points because our time was limited and our bodies were tired....my total for the day, though, tallied at 150. I'm good with that! 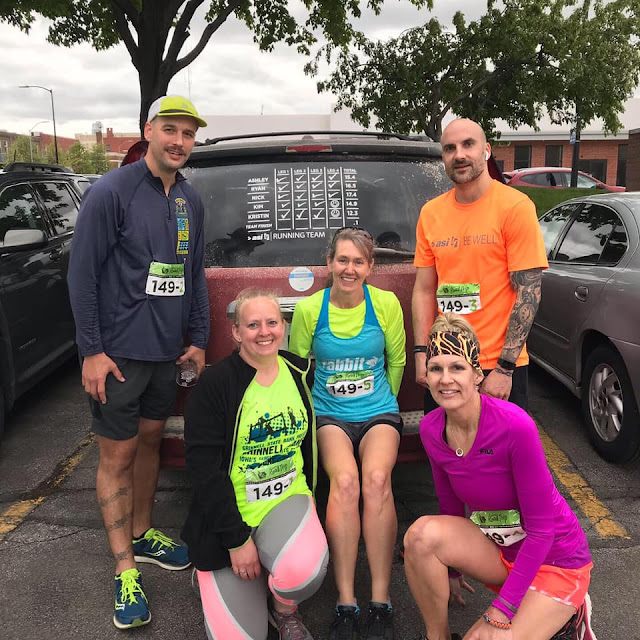 So, that's a wrap on the 2019 edition of the Market to Market Relay in Iowa (there's also a M2M in Nebraska, in October each year). Have you ever been on a relay team for an event such as this?