It's 'fession Time, but Where Do I Even Begin... 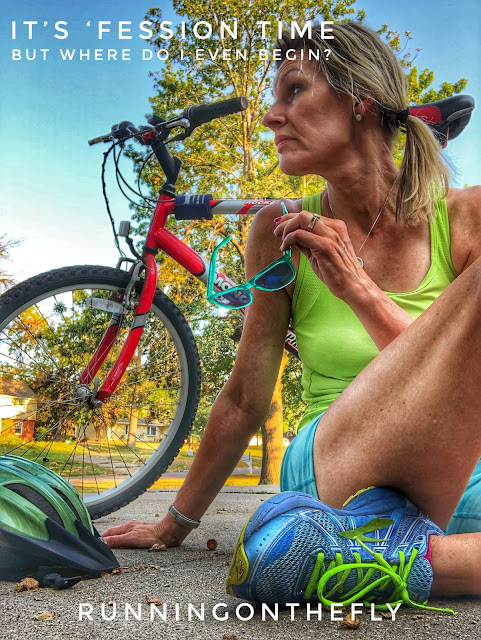 It's 'fession time, but where do I even begin?

As if 2020 hasn't been a wicked ride on a broken roller coaster, August has not exactly been a picnic in the park.  In fact, the past month has thrown a tank of lemons in my direction.

It's a good thing I have an affection for lemonade! By the way, I'll take that lemonade straight up, sans anything mixed in, because I don't trust myself not to spill.

So, shall I begin the 'fessions?

First off, I'll just cut right to the chase and Frankfess that while things could definitely be better (#understatement), they could be so much worse. Most have heard about my recent friendship (#overstatement) with the new boot in my life. His name is Frankenstein, but I'm calling him Frank for short. The two opinions I've gotten on my condition are not in 100% agreement (the ortho specialist at the urgent care thought it was a stress fracture; the radiologist thought not, but agreed it looked suspicious). I have an appointment with a podiatrist next week for further scrutiny and assessment. Although Frank isn't heavy, he's incredibly awkward. I'd compare it to lifting light dumbells with numerous reps (and bad form LOL). A few "reps" wouldn't be a big deal, but over the course of several hours they would start to feel heavy. Thankfully, this is a temporary situation.

Next, I'd derecho-fess that I have a new respect for all the folks who have to live with hurricanes and their aftermath. After the derecho had moved on, our town was left in a devastating state of destruction. Our house was without power for nine days, and our internet service was out for almost two full weeks. But you know what? It was tolerable. A cold front came through, so the cooler temps (and reduced humidity) were very conducive to all the clean-up. Our house stayed moderately cool, we were able to charge our phones via our cars, and I developed a tolerance of lukewarm tap water (no power = no filtered water via the fridge). And, I either wore a different-placed "messy bun" everyday, or simply did my hair at the office.

Let me fitness-fess that initially it was a severe gut-punch to be forbidden from all things on foot. We're talking running (my first love), walking (my usual daily go-to), and stair-climbing (no need to explain). I'm assuming the elliptical is also off-limits (but I have no interest in hibernating in my basement anyways). Thankfully, biking (for the time-being) is still a go! After all, it's a non-weight-bearing endeavor with ZERO impact. I have to be careful to keep my foot stabilized on the pedal, and I'm keeping the gears low and avoiding as many hills as possible (difficult, but not impossible, in my town). Can I tell you how good it feels to not be confined to the couch?

I'll also Damfess that I'll have to miss the virtual running of DAM to DSM. Yeah, that's another gut-punch, since I've run that race every year since 2008. The silver lining, though is that I'm relieved to have a legit reason to not be taking part. The route is usually a point-to-point 20K that encompasses countryside, residential neighborhoods and metropolitan scenes. First the race was post-poned from May 31 to September 5th, then the route was altered to 2-loop 10K endeavor. In the past month, it was outright deemed virtual (and I had planned to run this altered route with some other peeps). Sorry, but a looped 10K route just wouldn't do this great race justice, so now it's a non-issue since I will be sitting this one out. Glass (sort of) half full.

Lastly, I'll runfess that it's frustrating to be sidelined. Hey, most of us have been there. Almost three years ago, I was on the verge of my return to running after my 3-month sabbatical (following that freaky emergency surgery). That story had a happy ending, so I'm quite hopeful this current one will, too. As I've said before, I'd rather embrace the big picture and be grateful for what I can do instead of dwelling on what I (currently) cannot. Hope not mope!

Anyways, those are the major 'fessions for now. It's nice to get them out in the open, but I also feel guilty whining about such things. Again, it could be much worse.

How about you? Anything to 'fess about?