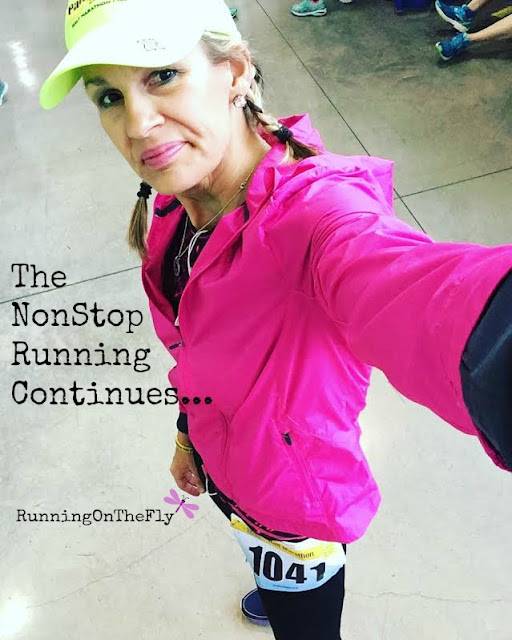 My reality (again) this week was the amount of "stuff" happening in the month of April. Truthfully, it's that way every year, but I feel like I'm still searching for that perfect level of organization to cruise through the process instead of always playing "catch-up." And a little more sleep would be nice...if there was time for it (LOL).


Here's what went down this past week:

Monday. I'm a creature of habit (hence the #nevermissaMonday thing that I've been doing since January 2016), but I'm also open to shaking things up once in awhile. My running friend, Barb, wasn't available for our usual #5at5 routine, so I rose and shone (so to speak) and ran those five miles by myself. I have done a lot of 5-milers on my own, but it's been awhile since I've gotten up at 4:30 a.m. to do so. The run went well, and was a good means of reinforcing that I can do tough things all on my own.
Tuesday. Typically Tuesdays and Wednesdays are "recovery/rest" days for me. I may do some strength-training, or minimal cardio, but running is usually off-limits. That said, I've recently started adding speed work into my 26.2 training plan, but I'm doing it bi-weekly...and this week was an "on" week. I had planned to do it Wednesday (which sounds crazy given the Wednesday I had on tap...more on that later), and there was rain in the forecast (as well as cold temps)...so I opted to do the speed work on Tuesday instead. I also had a dance recital rehearsal to get to (oh, did I mention our daughter's recital was happening this week, and there were additional rehearsals most of the evenings?).

I headed to the golf course (right by my house). There's a good hill that is a popular sledding hot spot in the winter. The hill is not long, but pretty steep. I have used it for hill sprints many times in the past, and thought it would be a good quick workout. I did a 1/2 mile warm-up run, and had a plan of doing 1-mile of hill sprints and then run the remaining 1/2 mile back home for a cool-down. According to my Garmin, it took 21 sets to reach that 1-mile mark. And the bonus? I made it back home (and to the dance rehearsal) before the rain hit. Boom!
Wednesday. As mentioned, this was another week of busy-ness. Wednesday evening was the full dress rehearsal for the daughter's dance recital. Granted, that does not mean much to the general population unless you are a dance mom. Even though I am no longer needed back stage, it's always a treat to be there to see the entire show with all the costumes, makeup, music and lighting (trust me on this, it's pretty nice!). This year, however, our son was getting inducted into the Honor Society at his college...at the exact same time, but 2-hours down the road.

Although it was tough missing my first dress rehearsal since we've had a dancer (our oldest started dance when she was a toddler...in 1997!), this was a special evening for our son. The husband and I road-tripped and got to see the president of Iowa Central present the honorary cord/tassels to our son. He graduates next weekend....which means another crazy weekend is in store for us...
Thursday. As usual, I met up with Barb, and we knocked out our #5at5, and boy was it a cold one! I had to dig out my full tights and a fleece jacket. Lucky for us, though, because as the day worn on, the temps continued to fall and the wind increased. And, more rain!
Friday. A day of rest (in terms of running), but there was the usual daily stuff...planks, push-ups, abs, etc. The highlight of Friday was the opening performance of the dance recital. Again, I respect that dance recitals mean little-to-nothing to a lot of people, but recitals are a big deal to all the dancers (and their families). It's quite amazing watching all the performers as they grow up through the years...seeing how they evolve from awkward little girls, terrified by the bright lights and the big stage to becoming confidant young women, not afraid to smile as they embrace the art of dance.
Saturday. Momma N had been having attitude this week, but she gave us a tiny bit of mercy for our half marathon. You know the drill...weather stalking for several days, checking multiple weather apps, hoping one of them will show a better forecast (or is that just me?). The predicted rain held off until after the finish line, but we did have plenty of wind (especially in the final 3-4 miles). The Drake Road Races Half Marathon was my first 13.1 since last October, as well as my longest run in this training cycle. Overall, the race went well, but it was a constant battle of running vs. racing. Stay tuned, the recap is coming!
Sunday. I think (finally!) all the late nights and constant motion (running and otherwise) have taken a toll. How do I know? I turned off my alarm (at 5:30) and the next thing I know, it's almost 7:00. I seldom ever fall back asleep (and never for that long LOL).

The weather outside was frightful...temps in the low 40's, windy and raining (again). I always do a short recovery run following a tough run or race, but I was less than excited about heading outside. I decided to fire up 'Milly and spend a little time with her.  The DOMS seemed to be making an appearance, so there will be lots of foam rolling in the next few days...and possibly an Epsom salt soak (though I am NOT a bath tub dweller, just saying).


So, that's the short version of my week. My mileage (Monday-Sunday) came in at 26, which put me just over the century mark for April (103). As I have said many times, I am NOT high mileage runner. Any time my monthly miles approach the 100-mile mark, I tend to start having over-training issues. So far, so good with this training cycle...we'll see what May brings as my mileage peaks in the next four weeks.

The Fight for Air Climb pics were released this week! I was pleasantly surprised to spot a good one of me...typically event pics have me with one or both eyes closed, my mouth wide open, or my legs bent at an awkward angle. This pic was legit!
My #fridayfashion post reflected the unseasonable weather on Friday. Look closely...I'm wearing a cami AND a poncho! I'd love to see what you're wearing on Fridays! Follow me on Instagram or Pinterest, and tag me!
It had been a couple months since my last hair appointment, so I was due for an update. Doesn't it feel great to get the hair touched up and let someone else do the shampooing and blow drying? 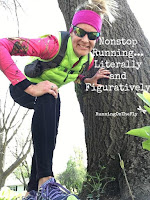 OOPS, I did it again 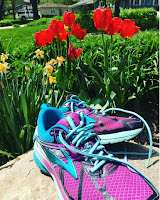 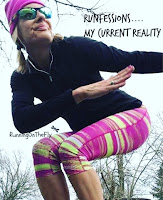 Tell me about YOUR week! Has Momma N been blessing you or cursing you with weather? Do you ever find yourself in the midst of several weeks of nonstop activity? What's the longest you have caught yourself snoozing after the alarm has gone off?