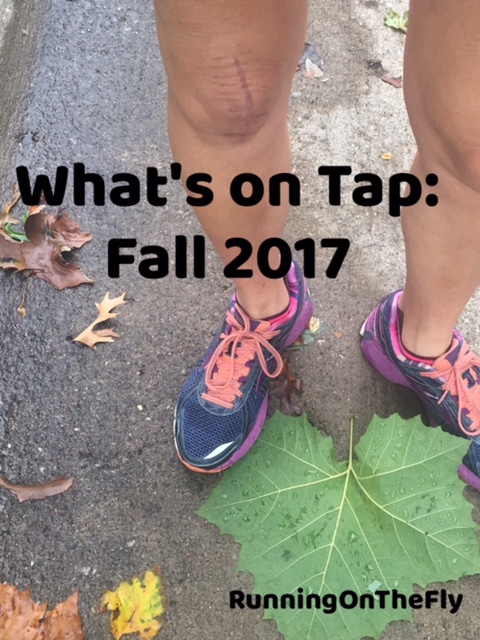 Fall 2017 is going to be unlike any fall I've experienced  (in terms of running, that is).

There's a very conservative number of happenings on my roster this year. When I say conservative, I am not joking...I have three official events bought and paid for. That's like half of what I'd normally have on my calendar.

Oh well, those three events are sure to be fun. And, since there's only three of them, I plan to showcase them.


But first, I should rewind and explain a bit about the lack of start (and finish) lines this season. Remember that little emergency surgery "incident" back on June 29th? Yes, well, that little incident threw a major curve ball into my running for the remainder of summer (for those who haven't been following my journey this summer, full details are HERE). In other words, there was ZERO running (having a nasty 6-inch suture seam directly over one's knee will do that to you).
Anyways, I was granted clearance from my surgeon last week to return to running. Even though I wasn't able to run over the summer, I was able to walk. I logged many miles in the walking shoes, and I believe that served me well in maintaining much of my endurance and cardio capacity.

First up, there's the Kickoff 2 Kinnick 5K on September 30th (Iowa City, IA). Now in its 4th year, this event benefits the University of Iowa Dance Marathon (supporting fundraising efforts for childhood cancer treatment and research). The hubby and myself are both University of Iowa grads, so this event will be near and dear to our hearts. The route finishes on the field of Kinnick Stadium, the home of the Iowa Hawkeye football team!

Next, I'll be running the Mercy Live Up Loop 5-Mile Run on October 14th (Des Moines, IA). This 5-miler is part of the IMT Des Moines Marathon weekend. I first ran the Half Marathon in 2008, then returned in 2011, 2012, 2013, 2015, and 2016. I also ran the Full Marathon in 2014, the 5K in 2015, and the Mercy Live Up  5-mile last year as well. To say I have a deep fondness for this weekend of running is a major understatement. The organizers are actually starting a new loyalty program this year (the Heel to Toe Club), honoring runners who have run any of the events in years past. That said, I should be receiving a 5-year pin with my registration packet (and a 10-year pin in 2019)!

Last of all, the grand finale of my fall, will be the Rock'n'Roll Las Vegas Half Marathon on November 12th. Not only will this be an epic distance for me (returning from the surgery & subsequent recovery), but it's gonna be a major girl's weekend as I meet up with several blogger gal pals!
Another thing different with my fall racing season this year is the fact that I will NOT be racing any of these races. In fact, I will probably have to do some of them with run/walk intervals. Even though my endurance is probably strong enough to go the distance, my recovering knee probably isn't. Honestly, it's been almost three months since I've been able to bend my right knee completely. I can bend it enough to run without compromising my form or stride, but there really isn't time to train for these distances without throwing in some walking breaks (especially the half marathon). And I'm quite alright with that.

So, that's what I have on tap for Fall 2017. Tell me about your schedule...any big races on the horizon? New events? Training for winter races?

**I'm linking up with Marcia and Patty and Erika for Tuesdays on the Run... We're talking about Fall 2017 racing schedules. Join the party!
...and with Susie and Debbie and Rachel and Lora for the Running Coaches' Corner.

**And with Nicole and Annmarie for the Wild Wednesday Workout