Dang! I'm not quite sure how I pulled this one off, but I'm pretty happy (and, dare I say, proud?) of how well the race went.

Anyone who knows a thing or two about competitive running (at least within the vicinity of Iowa) has probably heard of the Drake Relays (more info HERE). Hosted at Drake University (Des Moines, IA), this annual event attracts a very competitive field...elites, collegiate stars, and high school greats are all in attendance for this "mini" version of the Olympics.

In conjunction with the Relays, Drake University also hosts the Drake Road Races, for those of us who are not quite in the same (competitive) caliber as those who have qualified for the actual Relays themselves. There's a half marathon and a 5K. This year, they also brought back the 10K. All three of the Road Races events were held on Sunday, April 22nd, and kicked off the 2018 Drake Relays events.

Let me rewind for a second, and give you some background info on what was unique to this year's experience. In a nut shell...lack of sleep. I registered for this race back in December (early bird promo with a heavy discount). Our school's prom was held on Saturday evening, and this race just happened to fall on the morning after...no big whoop except for the fact that I also worked at the after prom party until 4:00 a.m. I didn't make the connection that these two events were happening within hours of each other until recently. Although I have known the dates of both events, I had not seen them side-by-side on the same calendar. Crazy, right?

Not one to shirk from my volunteer duties or DNS a race for no good reason (sleep is so overrated), I decided to forge ahead and do both. I should also mention that in the week prior to the race, I also had been spending several hours each day working on decorations for the prom, so my legs saw a lot of extra action in terms of squatting and lunging.
Anyways, having made it home by 4:00 a.m., I power slept until 5:30. My friend, Barb, picked me up at 6:00 for our hour-long drive to Des Moines (the race start time was 7:30). I thrive on little sleep, but didn't quite know how my body (or mind) would handle 13.1 miles with an already compromised body (from all the "painting" squats in recent days).

Having run this race last year, I knew the route would be virtually the same, though I also knew they had made a few adjustments to allow for the finish line to be inside Drake Stadium on the famous track (affectionately known as the Blue Oval). I also knew the route was going to have some hills (again, cue the achy hamstrings).
Before my revelation of the busy evening prior, I had hoped to shoot for a sub-2:00 finish time. I have not run a lot of sub-2:00's, but I have (until recently) been consistently close to 2:00. In the past year, though, I've been finishing more in the 2:05-2:10 time frame. With the 90-minutes of actual sleep, though, I threw any hopes of a 2:00 (or faster) finish out the window.

Anyways, we arrived at the race site with plenty of time to use the (indoor) bathroom and do a short warm-up jog. The temps were in low 40's (and expected to get warmer throughout the morning). I considered wearing shorts, but opted for capri's in the end. I also had a tank top with arm warmers under a light long-sleeved top (that I could easily shed and tie around my waist if I got too warm).

After a great rendition of the National Anthem, we were off and running. Not sure what kind of a strategy to go with, I lined up near the 2:00 pacer. I doubted I'd be able to stay with him the entire race, but I knew his pace would be comfortable for a while.

My right hip flexor had been feeling a bit wonky recently, and it felt wonky (again) on race morning. Like most races, the first mile was crowded, which is not necessarily a bad thing since it forces me to hold back a bit on my pace. Even though the hip felt tight, it wasn't uncomfortable.

The first mile felt good, especially after the crowd spread out. The second (and most of the third) mile was along a long, straight stretch with a couple of very low-grade inclines. Easy peasy.

I had some oatmeal before leaving the house, so I was good for awhile on food. I had brought along two Honey Stinger gels and planned to use them during miles 3 and 8. It was just after the 3-mile mark where the course turned south, and gave us a nice downhill  There had been a water stand in the second mile, but not in the third mile. I decided to try sipping (intermittently) on the first gel until I came upon the next water stand (which wound up being near the 4-mile mark). Problem solved.
The 4th and 5th miles had the race course winding through a scenic historic neighborhood with numerous stately homes. There were a lot of twisting curves and several rolling hills, and my hip was still feeling a bit cranky. I had been able to stay with the 2:00 pacer without any effort,  but I could feel him slowly breaking away from me just after the 5th mile. Oh well, onward! I knew I wouldn't be hanging with him (or his group) the entire race anyways.

Over all, I felt strong. I didn't really feel fatigued, but I'm so used to going on limited sleep that I don't know if I'd recognize the signs of true exhaustion. I do remember turning the corner, just after the 6-mile mark, and thinking that had I done the 10K, I'd be almost done. How's that for a fleeting thought?

Thankfully, the wind was low-key, and out of the east, so we wouldn't have to deal with much until mile 11 and 12. The temps were comfortable, and my light layers felt perfect.

Although I had been grabbing water at every water stand, my tummy was starting to feel a little icky. Often times, my tummy revolts a few hours after a long race (if I've had some gels), but it was odd for it to be feeling off while still running.

I made it to mile 7 and gave a silent cheer for having made it more than half way. It's not that I wanted to be done, but I still didn't know how the morning was going to play out for me. I didn't know how much longer my adrenaline would hold out (if that was, indeed, what had been carrying me through the first half of the race).

By the time I made it through the 8th and 9th miles, my tummy was really starting to talk to me, and not in a pleasant manner. Also, I could tell my legs were taking a serious beating from all the hills. I had only walked (briefly) a couple times through the water stations, so I didn't (consciously) feel tired. I feared if  I'd take any walk breaks, though, it would be the beginning of the end, so I just kept pressing on. I did keep my eyes peeled for the next porta-potty...and spotted one about halfway up the enormous hill, midway through mile 9.

I glanced at my watch, and noted the time. The porta-potty detour cost me a good two minutes of elapsed time, but I doubted I'd be able to make it another three miles without risking a potential emergency. Ugh. Haven't we all been there?

Feeling rejuvinated, I soldiered on up the hill. I knew there still were several rolling hills remaining, but this was the last big one. Miles 11 and 12 were painfully slow, into the wind, and relatively boring because of the long, straight stretch of the route. I had seen the 12-mile sign earlier, just after the start of the race, so I knew things would get much easier once I passed that land mark on the return trip (to the finish line).

Finally, I saw the 12-mile mark, and my mind relaxed and my body started moving faster. It always amazes me how, even after 12 hilly miles, my body seems to get a sudden surge of energy in the final mile before the finish line. The 13th mile was one of my faster miles of the entire race. I should have counted the number of runners I passed in that final surge to the finish line...but, I seriously don't get a "charge" out of passing others...especially in the final stretch of a race when I know they're probably feeling just as tired as myself.

The final 1/4 mile or so rewarded us with a nice downhill, and took us into Drake Stadium for a lap around the Blue Oval to the finish line. A serviceman, dressed in military fatigues, gave me my medal and congratulated me. I immediately, thanked him (and all the guys surrounding him) for their service to our country. Seriously, running 13.1 miles is nothing in comparison to what these heroes in uniform do for us each and every day.
I had not glanced at my watch in the final miles. I knew I was not gonna break 2:00, so I didn't want to focus on that and, instead, just persevere to the finish line. I was really surprised to see 2:08:17 on my watch! Subtracting out those two minutes (from when I was hibernating in the porta-potty) meant I actually ran those hilly 13.1 miles in 2:06 and change! That's easily my fastest half marathon since my surgery, and one of my fastest finish times in recent years. Whodda thunk I could do this with a compromised body and very little sleep, on a hilly course none the less?
My official finish time showed 2:08:14. I finished 14th in my age group (of 42), 232nd female (of 492), and 687th overall (of 1113 half marathoners). Like I said earlier, I'm not quite sure how I pulled this off. It certainly was not a PR, but it felt like a major victory for me considering my fatigued state that morning and my overall frustrations from other half marathons.

Despite the numerous hills, this race is a lot of fun and a great challenge. The majority of the race course is through neighborhoods, and starts and finishes on the Drake University campus. There were many spectators along the route, holding signs and cheering throughout the morning. All of the street intersections were manned by law enforcement personnel. And, getting to run on the famous Blue Oval is quite an experience! 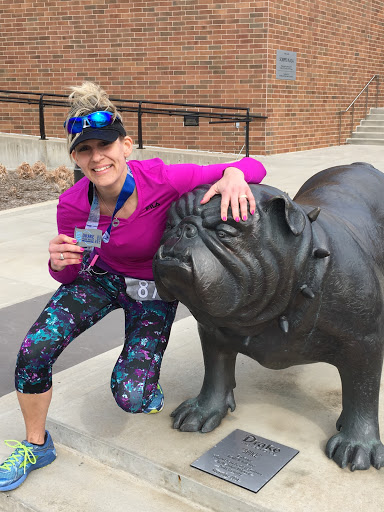 There's also some decent swag. Since this was the 50th anniversary of the Road Races, all participants received a 1/4 zip jacket. Also, they award designated 5K, 10K, and Half Marathon finisher medals as well as a free admission ticket to the stadium for the Relay events (held later in the week).
All in all, this was a challenging race, but also incredibly rewarding. Even without a PR, this race was a huge confidence-builder for me. It confirmed the power of endurance and the strength of body and mind. After all, with a mere 90 minutes of sleep in one's arsenal, you better have a few secret weapons on standby if you plan to run a half marathon and live to tell about it.

Have you ever run a tough race with little-to-no sleep? How about hills...love them or hate them? Ever run an entire race with a pacer?