Every Picture Tells a Story

Doesn't every picture (good or bad) tell a story?

Being a runner (and a blogger), I'm seldom ever without a phone/camera at the ready. Occasionally, though, other people are able to capture my special moments without any cues from me. Those, my friends, are the pics that truly speak volumes.

The strength of family
Three of my cousins and myself began tossing around the  idea of doing a marathon relay in the fall of 2015, shortly after I'd completed the Quad Cities Marathon on a relay team. I registered our team, The Gunhus Gals (in memory of our Gramma Grayce) in late December, and we all committed to the September 2016 event. A few months later, our Aunt Linda (Jessica's mother) was diagnosed with colon cancer, and underwent treatment for several months that spring and summer. We decided to dedicate our race to her, and since we weren't able to rally a fifth family member to join our relay team, we made Linda the honorary fifth "runner." Upon completion, we gave her the extra event shirt and medal. I totally love the picture of us approaching the finish line...it was a hot and humid day, but we all had smiles on our faces
A victorious finish
The Quad Cities Marathon definitely has a special place in my heart because it was my first marathon (September 2013). I was lucky to be blessed with a near-perfect experience for my first attempt at 26.2 miles. Perfect weather, scenic course, and no issues with fueling. Then, just after hitting the 25-mile mark, I was taking a quick walk break while drinking some water. A fellow runner, named Dean, passed me and said "Hey, you can't stop now! You're almost done! C'mon, I'll run you in!" It turned out that Dean had run every QC Marathon, and when I told him it was my first marathon, he high-5'd me, and shouted to the crowd, "Everyone, this is Kim, and it's her first marathon!" Everyone cheered. Dean continued to rally the crowd several times throughout that final mile on my behalf. We crossed the finish line, high-5'd again...and he quickly grabbed a guy standing alongside the finish line. This guy was none other than the race director, Joe Moreno, and Dean immediately introduced us to each other, and he (again) shared my story of running my first marathon. Joe congratulated me, and thanked me for choosing the Quad Cities Marathon for this monumental accomplishment. How I got through that final mile (and all the cheering) and then meeting the race director without crying is beyond me. Every time I see this picture, I remember that epic day.
A job well done
I ran my second marathon, the IMT Des Moines Marathon in October 2014. The course had some serious hills and there was a lot of wind. As I was coming up the final hill, just before the 26-mile mark, I noticed my husband. He joined me on the course for a short minute, a friend (Marie) was along the course and high-5'd me, and then I spotted our youngest daughter...capturing all of this on film. I rounded the corner, and crossed the bridge that lead me to the finish line. Despite the course being more challenging that Quad Cities course, I squeaked in with a PR of a few seconds. Isn't that crazy...running two very different courses but finishing within a few seconds of each other? 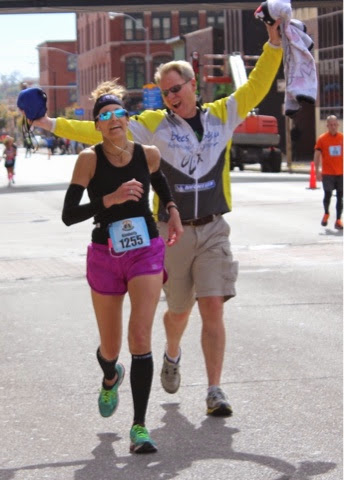 I had known Karen for awhile via Facebook (through interaction with running pages), and when she was in Des Moines for a running conference, we were able to meet up and run a race together (don't all running friends do that?). Historically, the Drake Relays Half Marathon is a hilly course. I have run it four times, and although the route has changed a bit each time, there are always plenty of hills. In 2015, the course had a huge hill near the 11-mile mark, affectionately named Bulldog Hill. The hill itself wasn't even a 1/2-mile in distance, but it was pretty steep. Karen and I were determined to make it all the way to the top without walking (even though there were more walkers than runners at that point). Upon reaching the top, we grabbed a volunteer to take our picture...not knowing he'd snapped the pic when we weren't looking. How's that for timing?
When the going gets tough, the tough finish the race

A friend, Paula, persuaded me to do a duathlon with her. It wasn't too hard of a sell, although my cycling experience (still to this day) is quite minimal. Also, this was a mere two weeks following my first-ever ultra (a 6-hour overnight adventure). Anyways, the course had us running a 5K, biking 20 (rather hilly) miles, and then running another 1-1/2 mile jaunt to the finish line. Oh gosh...having never biked 20 hilly miles, my legs were an exhausted mess upon dismounting  my bike. That simple 1-1/2 mile run was not so simple after all. Most of the other runners were moving in slow motion as well. Paula finished ahead of me, and was waiting at the finish line. I was able to finish in just under 2-hours, which ultimately was my goal, but I was totally in zombie-mode...and Paula totally captured my state of mind.
The truth hurts
A few years ago, I ran a half marathon in my hometown. It's a relatively small event, but it's my hometown, so I usually try to take part. Also, it's a looped course (that we run twice), and it goes right by my house. Let me just say it was a hot, humid day in June and I was just getting over some plantar fasciitis issues. The hubby was a course marshal (near our house), and snapped my pic at the approximate 6.5-mile mark and then again near the finish line. Ugh. Although I made it to the finish line, it's pretty obvious I should have sat this one out.
And, finally, the rally back after a set back can be epic

Emergency surgery was no picnic. Being side-lined for three months was not fun either. But honoring and respecting the necessary recovery played big dividends for me. June 29th was that dark day that landed me on the operating table.  I was granted clearance to resume running in mid-September. Two months later, I was able to run the R'n'R Las Vegas Half Marathon. Since then, I've been able to resume my running and have never felt better or stronger.

These are just a few samples of favorite pics that accurately document my experiences in racing. Not every race rewards the runner with a fantastic finish time, but every race does teach valuable lessons. And, I keep going back for more.

Do you ever keep record of your races, via pics? Do you buy any of the official pictures, or just go with your own?