Now in its 6th year, the Scheels Kickoff to Kinnick 5K is quite a grand event. This race benefits the University of Iowa Dance Marathon (who have long done a lot of work with childhood cancer patients and their families). The race starts near the Iowa City Ronald McDonald house and ends nearby, on the field in Kinnick Stadium, right across the street from the Stead Family Children's Hospital.
This was our third consecutive year participating. The hubby, myself, and Barb (the famous friend of mine who runs a lot of the miles with me and most of the same races) loaded the car and headed to Iowa City (an hour east of our hometown). As forecast, rain was coming down. It wasn't a heavy rain, but it was steady. 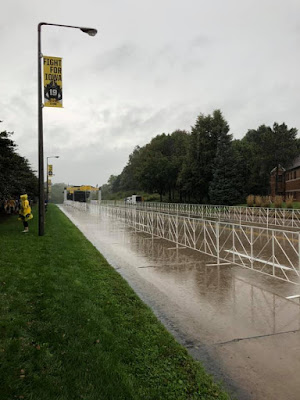 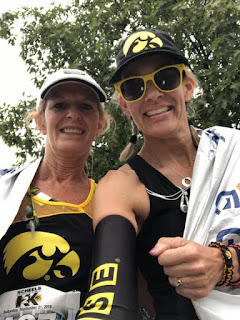 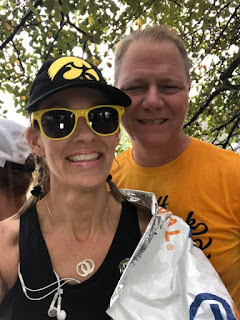 Since the medals were actually already at the finish line, in Kinnick Stadium, we had to wait for them to be delivered. While waiting in line, we were chatting with other runners.
Having run this before, we knew the course was basically a giant loop, and only had a short section (right after the start line) without sidewalks. So, it was decided we'd run the course on our own. We got our medals, handed them over to the hubby (who elected not to run, but would go park the car at a designated spot, near the finish line, and wait for us).

There still were occasional walkers, but being it wasn't an official race, it wasn't a big deal. In fact, it was nice seeing so many people out there, with their race bibs still pinned on, making their way through the course. Whether they were walking or running, it was a great thing!
About halfway up the long hill, we passed the 1-mile mark.  A short ways later, just before the top of the hill, we were reminded what this race was all about. 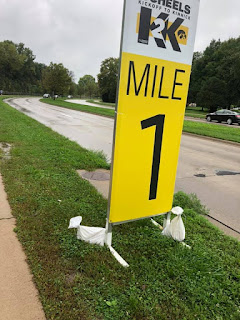 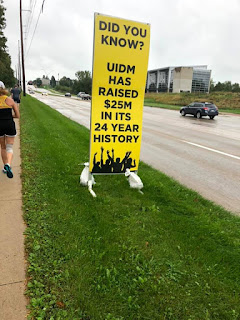 When our Garmins reached the 3.1 mile mark, we stopped.
We high-5'd each other, and walked the last couple of blocks to the townhouse complex (since we're the landlords, we knew we'd be assured of a parking spot).
So, this wasn't a typical race, and certainly not the race I'd known the past two years. Still, it felt great to finish what we'd come to do. Unfortunately, we later learned that they had left Kinnick Stadium open, so those who wished could still see the field and experience all the excitement of seeing the Stead Family Children's Hospital...the one that all the spectators in the stands wave to during every home game.
This is really a great family event. It's just unfortunate the weather didn't play nice this year. As mentioned, the race course is usually crowded with herds of people...runners, walkers (individuals and groups), and lots of kids (not all of which are supervised). It's really not a PR-friendly race, but that's not what this event is about anyways.

The swag is decent...this year we received long-sleeved Leslie Jordan hooded shirts. I love the heathered-grey color and the graphics look sharp.
The medals are nice, as well. As an Iowa alumnae, I love having the tiger hawk repping on there.