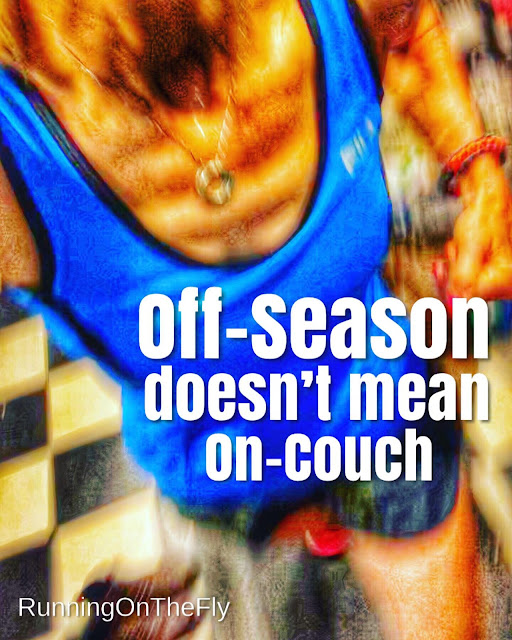 Have you ever taken an off-season?

Many are afraid of declaring an off-season, fearing all (or some) of their fitness gains will disappear. An off-season is not a time of complete and total laziness. It's actually a time of maintenance, while recovering from a busy, action-packed or demanding season.

Myself, I had several races on my calendar this past year, especially in the last four months. All of these races were sprinkled in with training for the Marine Corps Marathon. The dominant activity was running (no surprises there), which encompassed long runs on most weekends, weekly speed drills, and many short, easy-paced runs as well. There also was plenty of cross-training to keep my muscles strong and stave off injury.

Alas, the final race of the season has come and gone...so now it's time to recover, regroup, and ready myself for the what's next. Enter: Off-Season!


As the title of this post indicates, it's my off-season, but I don't plan to spend an excess amount of time on the couch.

The biggest shift for me will be less running and an increase in cross-training. Rest assured, I will still be running, just not as many days per week nor as many miles. My body worked hard the past several months, and I plan to reward it with a modified fitness schedule.

Here's a peak at what I'm anticipating on a weekly basis:

Mondays - #nevermissaMonday
This will include a short run (2-3 miles) in the morning and possibly some other light cardio (walking or elliptical) later in the day or evening.
Tuesdays - #restday
Nothing crazy...probably elliptical in the early mornings and stretching and/or foam rolling in the evening. Once in awhile, I'll do some strength work in the evening.
Wednesdays - #5at5
My weekly early morning meet-up with Barb is one of those rituals that I cannot take a pass on. We usually meet for five miles at 5:00 a.m., but if the weather is too cold or crazy, we've been known to run after work. We've also postponed this weekly run to Thursday from time to time.

Thursdays - #HIIT or #stairtraining or #strengthwork
A perfect day for non-running stuff.  I love the challenge of coming up with new and different workouts, many involving my stairway and burpees. I usually try to sneak in some strength moves in most of my HIIT workouts.
Fridays - #activerecovery
Since I'll most likely be running on Saturday, if there are any DOMS at play (from Thursday's workout), Friday morning is when they will probably be making an appearance. I'll either do some elliptical or go for a walk, first thing in the morning, to loosen up the muscles. There will also probably be some yoga or stretching on tap in the evening.
Saturdays - #long(ish)run
Who doesn't love a Saturday morning run? I might sprinkle in a rare 10-miler, but most of these Saturday runs will be in the 6-8 mile range. With no big races in the immediate future, there's not really a need for anything longer during my off-season.

Sundays - #easypeasy
This is the one day that will be spontaneous each week. I'll most likely be up and moving fairly early, but who knows if I'll go for a short 2-3 mile run, take a walk with the hubby (and/or Max), or just do some elliptical time.
As far as maintenance, there are several fitness fixes I do on the daily that will continue:
***Planking. I'm not sure how many years I've been daily planking, but it's been a long time. Every morning, no matter what, I do a 2:30-minute forearm plank. It's almost like breathing.

***Leg lifts. I started doing these regularly when I was back home, post-surgery (2017) and couldn't run for three months. My legs benefited, as did my balance. I do 120 total leg lifts almost every day (60 each leg), usually over my lunch hour. It only takes about 2-1/2 minutes as well.

***Push-ups. Ok, I don't do push-ups every day, but I do them frequently. Even if it's only 10-20 a day, they are great for upper-body strength and general badassery.

***Wall sits. These are a relatively new "daily" thing for me. I vary the time I hold them...anywhere from 1-3 minutes at a time. Oorah (yes, I'm still saying that, 4-weeks post MCM).

***Fasted cardio. Being an early-riser, the fasted cardio thing works for me. I don't even need caffeine before these daily workouts, but I do sometimes grab a glass of water (if I'm doing a long run, or any workout longer than an hour, I will have a snack or a small breakfast). I have not really lost any noticeable weight, but I have gradually lost inches (over the past couple years) since doing workouts in a fasted state. It's not everyone's gig, but it's worked well for me and my schedule.
So, that's my tentative plan of action for the next couple months. It may look like I'm staying pretty active...and that's because I am. With the scaled-back running, and lack of racing, this really is a balanced routine for me. Not too crazy, not too lazy.

Have you ever considered taking an off-season? If so, how long did it last?