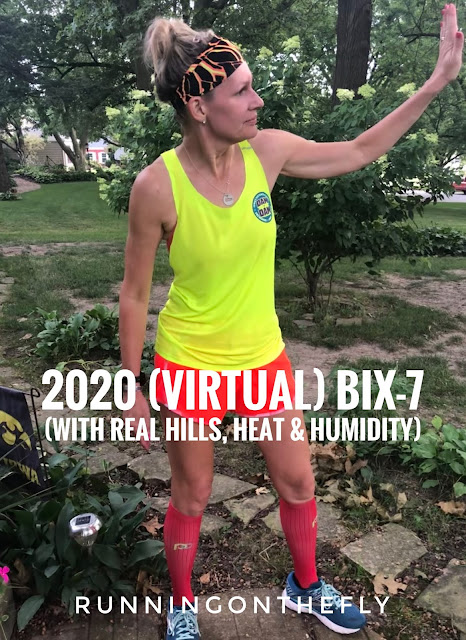 The Quad-City Times Bix-7 is yet another favorite race that succumbed to a virtual format.
To say this was like any other virtual race, though, would be a drastic untruth. But, hey, this 2020. We got to make the best of the situation...so that's what we did.
When I say "we," I'm referencing (1) the Bix-7 event itself (I was an ambassador, so I got to see things--somewhat--from an insider perspective), (2) the virtual race course I ran on on race day, and (3) my awesome virtual team of badass runner friends, Team On Fire.
A quick synopsis of the Quad-City Times Bix-7, now in its 46th year, is that it's a grand event that takes place on the last Saturday of July in Davenport, Iowa. The out-and-back race course is famous for its hills, especially the first hill on Brady Street, right outta the gate. That baby lasts for almost 3/4 of a mile and feels like you're running straight towards the sky. Being this takes place in the heat of summer, you can be guaranteed a warm and humid race day as well.
Although I've only run this race four times prior (2009, 2010, 2014 and 2019), it's hands-down one of my absolute favorite events. Granted, not everyone is a fan of the summer heat; throw in an especially hilly course, and the Bix-7 is a tough sell. But, there's nonstop crowd support along the route, live bands, several water stands, a few Slip-n-Slides and several sprinklers to run through. And, there's a kick-buttocks after-party immediately following the finish line.
This year, along with all things #COVIDcrazy, the race had to assume a virtual format. Bummer for those of us who love the live course (with all its nuances), but that made for a great opportunity for many non-local peeps to take part. Enter Team On Fire, a group of bloggers we all know and love, and this virtual race had all the makings of a great experience.
In prepping for the big day, we exchanged ideas on a theme, including running gear colors. This race is typically a hot and sweaty endeavor, so I suggested a fire theme since we'd all be "on fire" from running. Let's not forget there has been a substantial heat wave engulfing most of us in recent weeks. it worked out for all of us to run virtually together on July 25th, which would have been the actual race date had the event not been "virtualized."
For myself, I wanted to run a hilly route to best mimic the Bix-7 race course. As with most of my running adventures, my ever loyal companion and fellow Bix-7 alumni, Barb, was along for the fun. I've mentioned the hilly bike path that goes out west of town, which is a near 14-mile out-and-back distance. If you do the math, you can see that running this path one way, as a point-to-point, would give us seven miles (or there about). Perfection!
Race day arrived, and we had "ideal" weather to simulate a true Bix-7 race experience. The hubby even voluntarily got up early (at 5:30 a.m.) to drive us out to our virtual start line. Barb had set out some water near the halfway point of the path, and I had a handheld bottle with Nuun. We were ready.
Let's just say it was gonna be a warm day. The sun was barely above the horizon and the air was muggy already.
Even though this wasn't the actual race course, I was excited to take on the bike path hills on foot. I know that sounds a little crazy.  Even though I had ridden these hills numerous times on my bike, I had never run the hills on the back part of the bike path.
Similar to the Bix-7 race course, we had a decent-sized hill as soon as we started. Unlike the race course, though, it was just Barb and myself, so we didn't have a crowd of runners (or numerous walkers) to weave in and around. Also, the hill was big, but definitely felt much easier on foot than on wheels.
So, onward! We made it the near halfway point, which gave us a brief change in direction (going south for about half a mile instead of due east) and the smallest hill of the morning. By then, we'd already conquered four hills in the span of approximately three miles.
As we made our turn for the remaining 3+ miles, I paused to grab a quick pic of the final two hills that lie ahead. There's a good downhill that gets us there, but then a long steady climb. It levels off for about 1/8 of a mile, then there's a short (but very steep) climb up that final hill. 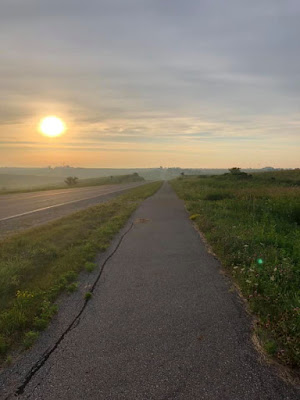 After reaching the top of the final hill, there's about two miles remaining. Fortunately, those final miles are on pretty level land for the remainder of the "race course." Whew!
We had contemplated running a few bonus miles (to get to 10 total miles for the day). After all those hills, though, we agreed that seven miles were sufficient.
How'd we do? Our pace was decent, considering the heat, humidity and the hills. That said, we did not treat this as an actual race...we ran it strong and steady, but neither of us had any intentions of "racing" it. Our finish time was good, but not in PR contention. Had there been some crowds of people, or even a few other fellow runners, it may have been a different story. Not a big deal.
In comparison to the actual Bix-7 race course, though, I think our virtual route was a little tougher. The Bix-7 hills are tough, no doubt, but there are fewer of them. Also, with the exception of that first hill on the race course, the other hills aren't as long. As for the sweat equity quotient? We surpassed that! My shorts were practically sagging on me because they were so perspiration-laden (I know, #eew). 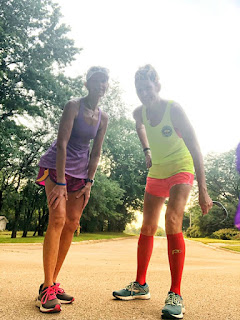 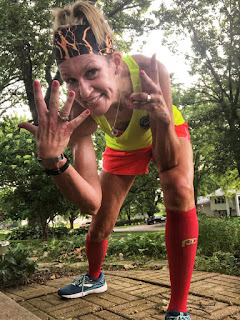 All in all, this was a fun experience. Like any other runner, I'd much prefer a live race to another virtual event, but that's not our reality at the moment. Even though races are getting cancelled, running is not...and I believe in celebrating that. I'm really glad we were able to (somewhat) mimic the Bix-7 course. And, even though the hills were tough, it was pretty empowering running some "new" ones. There's a lot to be said about a change of venue, right?
There was some nice swag for this. The shirts are cotton, but colorful and comfy. We received the commemorative "7" sticker, and the bibs were available by downloading (but I didn't wear it on race day). There also was a nice volunteer pin that came in my packet (which, BTW, arrived well in advance of race day). The pins would have gone to the race course volunteers, but instead were mailed out to the registrants, in hopes we'd give the pin to a special someone who has been a great source of support. I thought that was a nice touch! 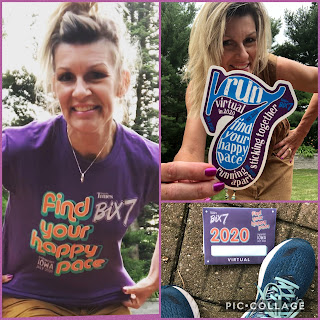 So, that's my fifth experience with the Bix-7. It wasn't quite the same as in years past, but it was hilly, it was hot, and it was humid (LOL). And, I had an awesome team of gal pals, virtually, running it with me. Does it get any better?
Have you ever rallied a team of friends for a race, virtual or in-person? If you were running a virtual race, would you try to simulate the race course, or just run the distance? How many of your races have gone virtual this year?
I'm linking this with Kim and Zenaida for the Tuesday Topics Link-Up
I'm also linking with Debbie,  Rachel, Deborah, Lisa, Sandra and Jenn for the Runners' Roundup
By the way...are you following me on social media? You can find me at these various platforms:
Let's connect : Facebook Instagram  Pinterest Twitter
Posted by Kim at Running on the Fly at 10:50 PM