Just go ahead and GLOW 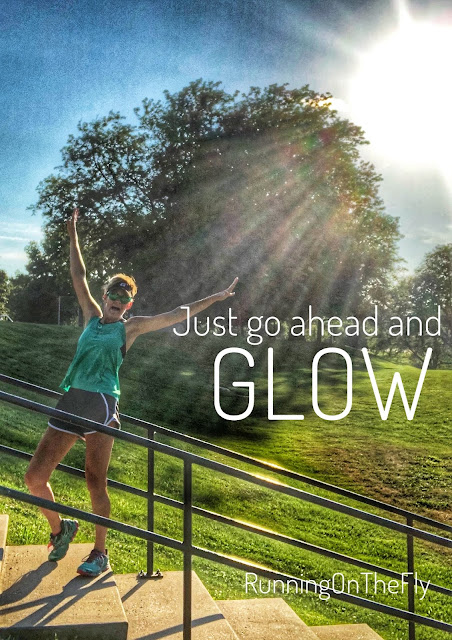 There's been all kinds of glistening and glowing in my world this week.
I'm quite alright with that. It's summer in Iowa; it's gonna be hot and it's gonna be humid (and not necessarily in that order). Besides, a little bit of sweat never hurt no one.
It was another week of (mostly) outdoor fitness, and I'm alright with that, too.
Before I share the details, welcome to the Weekly Run Down!
I love hosting this link-up with Deborah (from Confessions of a Mother Runner)! If you write a fitness-based blog, you're invited to join the party. The link-up opens at 1:00 (EST) on Sundays and remains open through noon on Monday. We love reading about everyone's weekly fitness endeavors, training highlights (or low lights) and race recaps. We ask that you link back to both hosts, and we encourage you to read/comment on the other linked blogs as well...please don't link-drop & dash ;-)
Here's what went down in my little world of fitness this week:
Never miss a Monday
I had the best intentions of running three miles, but those early-morning temps felt so good and I just couldn't get enough of that cotton candy sky...so I ran four miles instead. After work, I met up with a friend for a 2-mile power walk, and then took Gustavas out for an easy 9-mile ride. 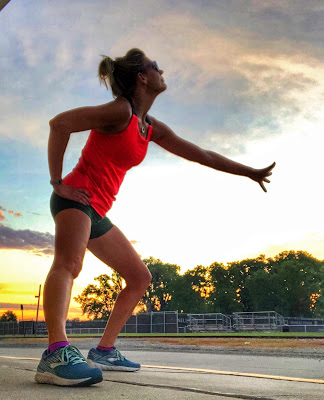 Easy-does-it Tuesday
I kept things easy-peasy with a 2-mile early morning walk, and then another 2-mile walk after work. One walk was cool (though humid), the other was steamy and muggy...any guesses which was which? 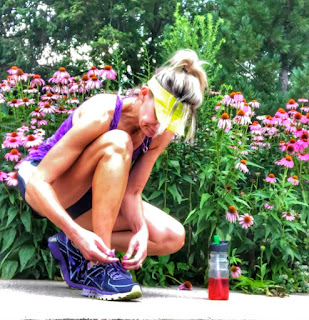 Double workout Wednesday
Wednesday morning started out innocent enough with the weekly #5at5 with Barb. Temps were in the mid-60F's, but with 91% humidity things were a bit on the balmy side. But, wow...that sunrise! 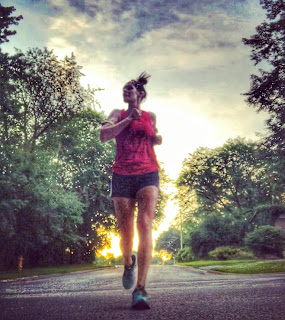 The hubby was out of town, and I felt the pull to take a ride out on the hilly bike trail after work. I texted Barb, and she was game to join me. So, it was a date, 12 hours after our morning run. Let me just say, even with a tail wind on the return trip from the lake, this trail is SO tough. The hills are crazy and there are no less than 13 of them...and over the course of 14 miles, they are condensed in between the 3rd and 12th miles. Back in town, I rode an extra mile (on flat ground), then went for a 2-mile walk to shake out my legs. 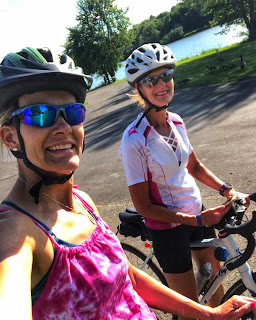 Double workout Thursday
Oh, there were a few DOMS at play upon wake-up. I kept things focused on the upper-body, and also went for an easy 2-mile walk before heading to work to keep the legs in motion. I've said it before...movement is medicinal for me, and my legs felt much better after that walk. 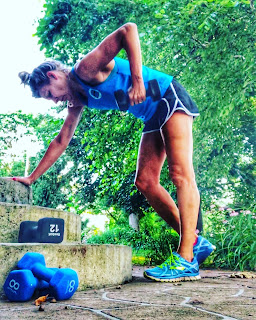 The hubby returned home by afternoon, and wanted to hit the stairs...so we headed over to the outdoor stairway. Another brick (of sorts) workout, with a 1-mile walk over, 50 flights of stairs (ahem, that would be 900 steps, just saying), and a 1-mile walk back home. As you can tell from the pic, there may have been a little glowing going on for both of us, but we felt pretty victorious conquering all those steps in the summer heat. Wouldn't you? 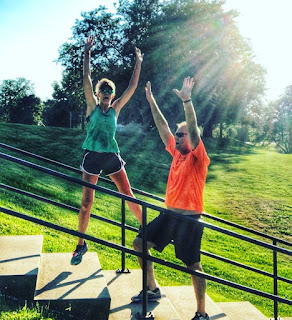 Recovery day Friday
Amazingly. nothing felt off Friday morning, but I knew my legs needed a break. Temps were in the mid-60's (again), which feel chilly on the bike, especially when there's a strong wind. We kept things on the down-low with a 7-mile ride and three total miles walked for the day. 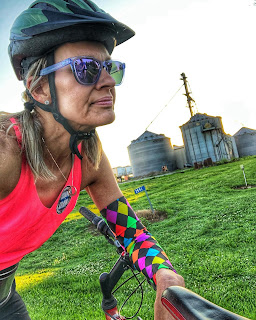 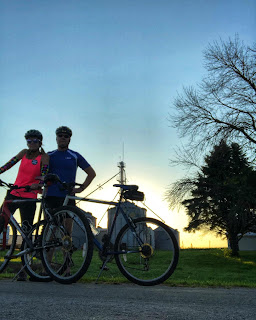 Virtual racing fun for Saturday
Remember me talking about the heat and the humidity? Well, both were front and center come Saturday (how does 74F with 95% humidity at 6:00a.m. grab you?). It also was the day of the Quad City Times Bix-7 virtual race, and several blogging friends, Barb, and myself had a race to run. I'll share a brief recap this next week, but suffice it to say the hilly bike trail sufficed as an adequate substitute for the actual Bix-7 race course, as did the hot and humid temps. After returning home, I felt like I'd run double the distance. I changed into some dry clothes, got comfy on the couch (with Max) for a few minutes...and woke up 90 minutes later. Whoops!
Later, the hubby was itching to return to the Chichaqua Valley Trail, for a (somewhat) short out-and-back ride with a quick meal sandwiched in the middle. We arrived on the scene just after 6:00, rode from Mingo to Baxter (9.3 miles) and shared a heavenly hamburger. On the return trip, we tacked on a little more distance to end the day with 19 miles of riding. The temps may have been hot, and the humidity still heavy, but at least you create your own breeze on the bike. 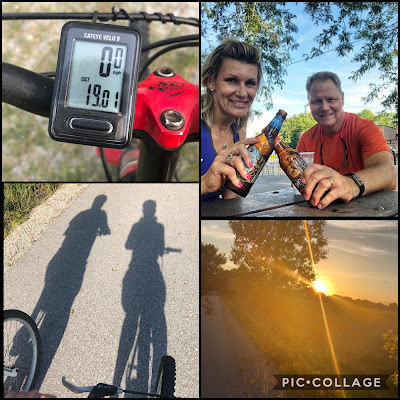 Keeping-it-simple Sunday
On the way home from our Saturday evening ride, we stopped at a nearby brewery. My strawberry brew had me zonked shortly after we arrived home, but I awoke bright and early on Sunday morning. Temps were flirting with another heat advisory (91F feels-like with the 77% humidity), so I opted for a 3-mile walk (with the hubby) instead of a recovery run. How ya like that glazed donut glow? 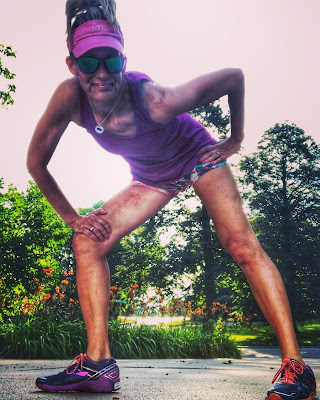 All in all, it was a pretty active week. Running wasn't too high with mileage this week, but those 16 miles had plenty of sweat equity in them. Walking took an upswing with 20 miles. Biking saw a lot of action, rolling out 40 miles in the heat. Strength work involved both the stair workout (lower body) and arms/shoulders on Thursday. With Saturday's hilly virtual race, I took a pass on speedwork and HIIT, so I'm hoping to work that in this next week. My mileage for the Great Run Across Iowa has me at 302.6...so I've passed the 249 goal and will be passing the 315 "grand" total this next week. I'll share the medal and shirt next week after everything is official.
In case you missed out, here's what all went down on the blog this week:
Fitness Fun With or Without The Sun
Warm Weather Outdoor Options
100 Days of Walking
In other news:
Friday Fashion Flair! Nothing ground-breaking about this week's featured outfit, but I do prefer 3/4-length sleeves in the air-conditioned office, and there's nothing wrong with a bright color. I should mention the funky and chunky necklace I'm sporting is actually a belt (which has never adorned my waist). Go bright or go home! As always, you're welcome to join me on Fridays...post a pic on Instagram, grab the hashtag (#FridayFashionFlair) and be sure to tag me (@runningonthefly). 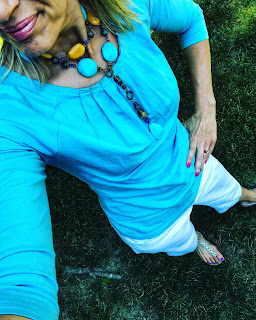 I don't normally share a lot of personal stuff here, but we've have had nonstop excitement  and celebrations this month. The latest? The oldest daughter's boyfriend became her fiance' last Sunday! 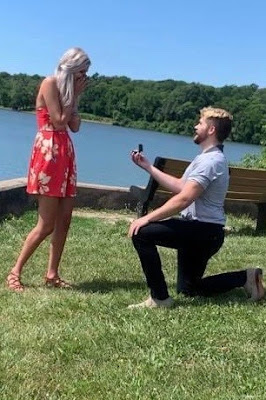 And, I received word recently that I was accepted into the BibRave ambassador program! I'm really excited for the opportunity to get a peek at new fitness gear, accessories and gadgets. Heck, maybe there will even be some opportunities to experience new races when live races make a comeback. 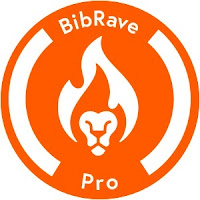 So, that's the latest and greatest. Summer keeps happening and I keep happening with it.
How was your week? Any fun happenings? Are you able to get outside, or is the heat keeping you indoors? Virtual racing?

Click here to enter
Posted by Kim at Running on the Fly at 10:18 AM