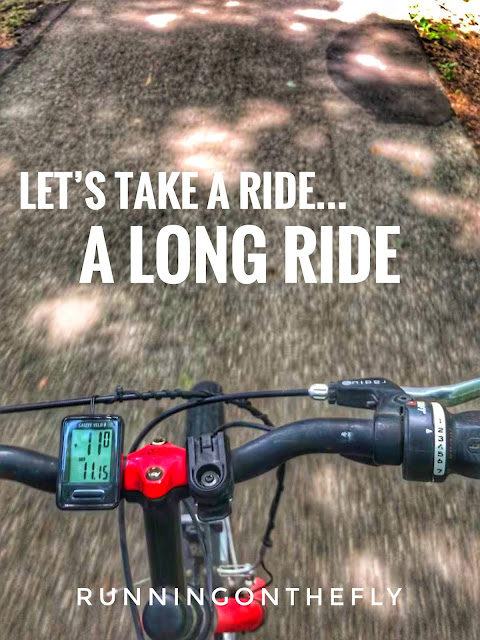 "Let's go for a ride," he said.
It was the hubby's idea, and this ride was estimated at being upwards of 50 miles.
Oh, and this wasn't a car ride; it was a bike ride. Prior to this, my longest ride had been 20 miles on a borrowed road bike (for the Flying Pigs Duathlon, August 2015). This ride would be substantially longer, and it was on a mountain bike.
What could go wrong?
Let me set the scene...
I consider myself a novice on the bike. Even though I have logged a lot of miles in the past year, I still have a lot to learn and there are numerous skills that need perfecting. I would never embark on a journey of this magnitude on my own, but I was nervously (and excitedly) anticipating this adventure with the hubby.
This Longest Ride Ever happened on Friday, July 3rd. With Sully Freedom Fun Run 5K happening the next morning, I wanted to get in some extra running miles on that Friday as well (since I knew I wouldn't be running after the race). Barb and I met up early and ran eight miles in the warm and muggy air, and I was back home before 8:00. I took my time cooling down, stretching, and re-hydrating. I even did a short walk. Yadda yadda yadda.
We didn't get to the trail head, in Baxter, until just before noon, so the sun was (obviously) high in the sky, the temps were warm (upper 80F's) and the air was humid (89%). I had a full bottle of water, plenty of snacks, and an open mind. 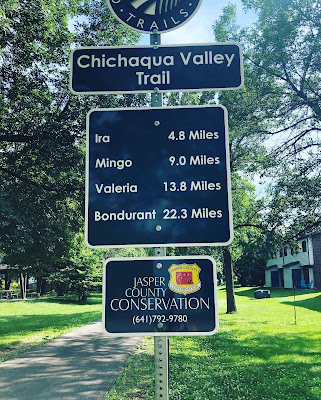 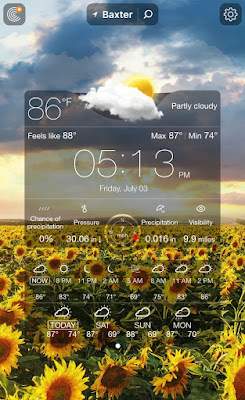 finally, back in Baxter!
We kept pedaling and pedaling...finally seeing the spot from where we'd started, almost five hours ago. When we reached the parking lot, it was all I could do to not lie down on the ground. I couldn't believe how exhausted I felt...my body, and my mind. Turns out, it was actually 23.37 miles between our starting point and the restaurant. I'd not taken into account the distance from the city limits to the restaurant since my odometer hadn't been working on the trip going into town (all together now...#duh LOL).
Anyways, despite my grumpy attitude in the final miles (both to Bondurant, and than also back to Baxter), I did enjoy the challenge of this ride. The weather was hot (and quite humid...duh, #JulyInIowa), and my legs already were a bit compromised from the morning's run, both of which certainly added to the difficulty of the task at hand. Like with running, it's the tough experiences that show us our grit, as well as our endurance and perseverance. I never felt like quitting, but I really had to dig deep at times.
Now that I have this big (almost) 47-miler under my belt, I am eager to see what else I can do. I don't have my sights on a century ride (yet), but possibly next year?
Something I'd like to invest in is an actual road bike. All I have is Gustavas, my mountain bike, and I have been told that a road bike would make a ride like this much more bearable. Also, I should probably up my gear game...padded shorts (ugh, they totally creep me out) and maybe gloves. I could do with a couple more bike jerseys, too. I'm still not the least bit interested in clip-in shoes, so don't anyone try to convince me otherwise.
I mentioned my 5K road race, which happened the following day. I was a bit concerned there would be some DOMS making an appearance, but they never showed. I felt fine the next morning, and the race went well. All's well that ends well, right? 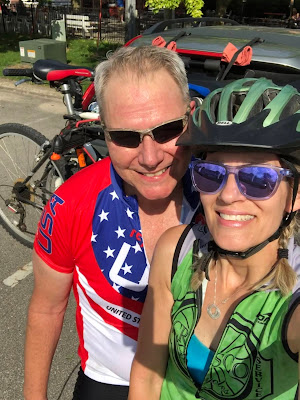 So, that's the story of my first long ride. I survived and can look back with a definite feeling of accomplishment. I also can see myself going back to this trail again...now that I've done it once, I know what to expect in terms of terrain and distance.
Have you ever embarked on a long bike ride the day before a road race? What's the longest distance you have gone? Mountain bike or road bike?
I'm also linking this with Meranda and Lacey for the Friday with Fairytales and Fitness link-up.
Are you following me on social media?
Let's connect : Facebook Instagram Twitter Pinterest
Posted by Kim at Running on the Fly at 11:36 PM