'fessing with the best of them 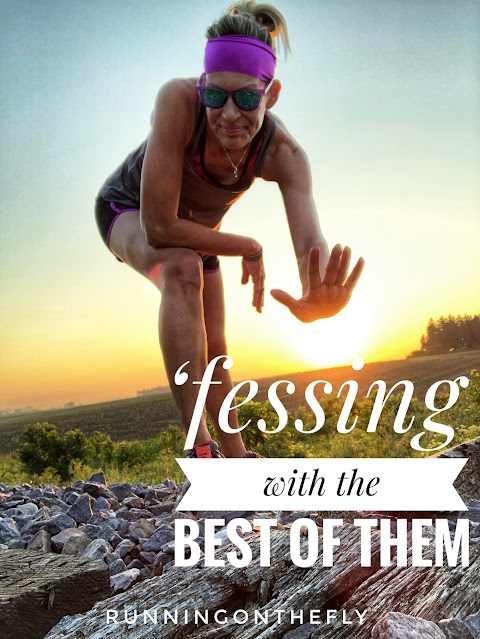 It's that time of the month and, yet again, there's plenty to 'fess about.
I know, I know...these are supposed to be runfessions, but I have a few extra 'fessions that need to be shared as well. After all, most of us runners have lives outside of our running shoes, right?
So, let's get started...
I must say, with the cancellation of the Air Force Marathon (I was able to defer to 2021), my zest for excessively long runs has diminished. I can honestly runfess that I'm totally alright with that, given the way 2020 has played out thus far. I'm still trying to get a long run done each weekend, but have no desire (or need) to go beyond the 10-mile threshold for the time being.
When I decided to bring back the weekly stair workouts (early June), I was pleasantly surprised the hubby wanted to join me.  Eight weeks later, I hubbyfess that he's been quite a trooper! A lot of these stair workouts have happened late in the day, after work, so the temps have been at their peak (ditto for the humidity). Recently, we've been doing 50 flights at a time, which translates to 900 steps. Fingers crossed this continues!
Although I've been consistently bike riding the past couple months, I gotta bikefess that I had been avoiding that first ride, on the hilly trail, out to the lake. In case you're wondering, it's a 14-mile round trip, and there are no less than 12 hills to do battle with, sandwiched within the "middle" 10 miles of the route. Finally, three weeks ago, I saddled up Gustavas and we had at it. Although those hills have not gotten any smaller, and I have had wind (there's that word again LOL) on every hilly ride so far, my body seems (somewhat) acclimated. I'm hoping to keep this routine up, on a weekly basis, for the remainder of summer. Fingers crossed on that one, too!
Speaking of biking, before I took on that first 2020 ride out to the lake, the hubby talked me into going on a 47-mile ride (recap HERE). Let me bikefess (again) that this was a major comfort zone violation...one that I was kind of dreading, but also excited about. It was a tough undertaking, in the heat of a hot summer afternoon. It's a rail trail, which means there's almost nonstop pedaling since there aren't any major hills to coast down (or climb). But it also was pretty empowering because it was my longest ride ever. In fact, there's a Bicycle Brew BBQ (44-mile round-trip) group ride on the same trail in a few weeks...and I think we're partaking (along with some friends).
As many know, our sweet little dog, Max, had surgery on Wednesday. He'd dislocated the kneecap on his back right leg (in technical terms, a luxating patella), which lead to a nasty ACL tear. He'll be fine, and good as new, after the six-week recovery ahead of him. We usually walk him twice a day, but hadn't been doing so due to his condition (as well as the excessive heat). Typically, walking with him can be annoying at times. There are numerous stops/sniffs/marks at almost every available lamppost, tree or fire hydrant...but I have to Maxfess, I really have missed those walks with him. 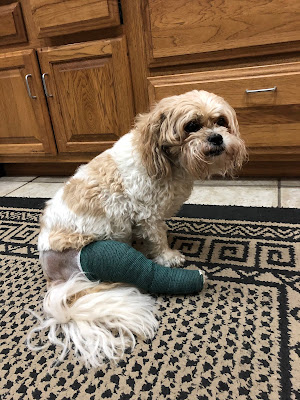 Lastly, another COVID cancellation has smacked me in the gut. Granted, it was not a huge surprise, but the Drake Road Races Half Marathon had been postponed (indefinitely) since late April. A small part of me was holding out hope that it would get rescheduled...but to no avail. Now, I have to racefess that I'm not sure when I'll do this (virtual) one, or where. Actually, I did run 13.1 miles back on April 19th, but I still feel obligated to run the "official" virtual (how's that for a play on words). I'm tempted to drive to Des Moines (an hour away) and run it on the actual race course (if I can remember all the twists and turns). Stay tuned...I'm not sure how this will play out, since there's also a 1-mile race (which I also ran virtually, back in April) that is part of a "double" challenge with the half marathon. I know, first world probs.... 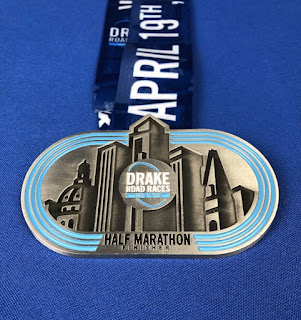 Didn't "officially" happen on April 19th...but now when?
Anyways, there's more to 'fess, but this is enough for now. July has kept me busy, even without marathon training taking place.
What's been happening in your world? Any runfessions that need to be disclosed? Even without many (if any?) races on the calendar, would you continue training, or doing long runs?
I'm  linking this with Marcia for the monthly Runfessions link-up.
I'm also linking this with Meranda and Lacey for the Friday with Fairytales and Fitness link-up.
By the way...are you following me on social media? You can find me at these various platforms:
Let's connect :
Posted by Kim at Running on the Fly at 8:12 PM