Where are you running? 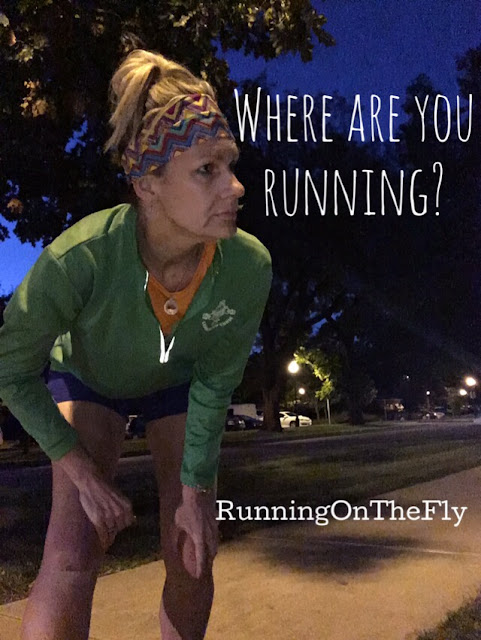 Some runners can be SO predictable.

Are you one of them? Do you find yourself running the same routes all the time? Or do you try to mix it up once in awhile?


Back in the early days, I was one of those predictable runners. I had a favorite route that I ran all the time...always the same distance... and (probably) always at the same easy pace. No hills, no speed intervals, no change of terrain.  Boring. Blah. Blech.
It definitely was a comfort zone thing. We all know what happens in comfort zones, right? N.O.T.H.I.N.G. Not only is it hard to make much progress, it's not good for your body to do the same thing all the time. We grow (in strength, endurance and spirit) by switching things up a bit. Running a variety of distances, training at different speeds, and changing the terrain underfoot all benefit a runner's fitness.

Thankfully, my eagerness to grow as a runner (and my boredom with the same old route) got the best of me. I now have several routes that I utilize in my training. All serve different purposes, and all have their own individual nuances. Care to hear more?

I give you Kim's Top Five Favorite Running Routes

The #5at5 route
I have mentioned this route a time or two (or several). As the name implies, it's a 5-mile route that I usually run at 5:00 a.m. with my friend (and main training partner), Barb. It's a looped route that goes out to our middle school and back to my driveway. There are a few rolling hills (which aren't as noticeable in the fall/winter/early spring due to the darkness), but most of the route is pretty flat. Barb and I run this route a lot, even when we're not in training, because it's a perfect distance and has very limited traffic (especially in the early hours of the morning).
My old standby-2.25-miler
This is the route that started it all....the route that I ran all the time when I was a new runner and didn't know to do things differently. It's a flat route, and the 2.25-mile distance is a convenient quick workout if I don't have a lot of time. It goes around part of the nearby college campus, so it is well-lit in the early morning or evening hours. And a bonus? All of those lampposts are great markers for intervals or Fartleks. Sometimes I run an extra block out and back, which ups the total distance to 2.5 miles (if I'm wanting a more "rounded" number).

The 1.5-miler around campus
There is a loop around the college campus I run (and walk) frequently which is exactly one mile in distance. The caveat is that it's a couple of blocks from my house, so adding those extra blocks (to and from) makes it a 1.5 mile adventure. I can also do as many loops around that 1-mile perimeter as I want and not have to worry about looking like a lost idiot because with the constant motion of students coming and going, no one is going to notice me coming around for a second (or third) lap. I know, pure genius...right?
The 2-mile quick & easy (hilly) route
I live in a somewhat hilly neighborhood. Every run from my driveway either starts or ends on an incline. The block I live on is exactly a half mile in distance around the perimeter, and that will net me two good hills (one on the "front" side, and another on the "back"). Across the street from my house is another block, but it's a little bit smaller...it takes three complete laps to get a mile in distance. But, that little block also has a hill on its front and back sides, and they are on a steeper  incline. Thus, I can run alternating loops around these two blocks...starting with the small block, then doing a loop around the big block, then the small one (again), and the big one (again), and ending with a final lap around the small one. This little excursion takes me approximately 20 minutes, is two miles in cumulative distance, and there are 10 hills conquered in that short amount of time. This little route gives me a lot of bang for my (running) buck!  It's perfect in the dark or in inclement weather, or any time I don't feel like venturing too far from my house.
The lake
And, finally, the lake! We have a beautiful lake on the southwest area of town. It has a partial wooded path, some fine gravel, and some paved concrete...all culminating in an approximate mile loop around its perimeter. Often times, I'll drive over and just run a few laps around the lake. Other times, I'll run the two miles from my house, do a couple laps around the lake, and run back home. It's a perfect setting if I'm not feeling like committing to a long run or don't know how far I want to run...I can start out with a lap or two around the lake, and stop whenever I want. It's also a perfect location for a group run because runners of all abilities and paces can run "together" and not have to worry about being left behind.
Bottom line, I like  variety. I have learned that my body benefits when I'm constantly changing my routes, distances, and terrain. There's no time for plateauing or getting stagnant, right?

What's your running routine like? Do you vary your routes? Got any favorites that you run more often than others?