Just Run.
That has been my mantra this past week.

In all reality, don't most of us runners already subscribe to it? After all, running is there when we need an escape. It makes us feel good. It's one of those "constants" that we can always rely on. And, it's something we can do (almost) anytime, in any place, and in all kinds of weather.

Such was the case for me. In the midst of all kinds of "reality checks" this week, running was its ever-so-reliable self.


Here's what went down:

Monday
Although my legs were feeling pretty recovered from the previous day's Fight for Air Climb, I decided to wait on the #nevermissaMonday run until the afternoon. Good planning! The temps were much warmer, the sun was shining (intermittently) and most of the snow had melted (yes, we received some snow last weekend...I know, #shocker).
Tuesday
Nothing grandiose on tap for fitness (early morning walk and and 40 push-ups for the challenge), but it was the daughter's first home meet for tennis. Her and her partner rallied through the first set, winning by a tie-breaker. Then, they lost the second set (by another tie-breaker). Finally, after more than two hours of playing time, they won the match tie-breaker (yes, a third tie-breaker). This was followed by a 3-hour detour to the ER because she had pulled something in her shoulder/shoulder blade area near the end of the final tie-breaker for the match. The ER doc suggested a four week break from tennis (which will wipe out any more playing time), but we're hoping with rest (and plenty of intermittent ice) she'll be released to resume playing much sooner.
Wednesday
Finally, some spring-like weather arrived in Iowa! Barb and I did our ritual five miles at 05:00 and all was right in my world again.
Thursday
All kinds of weather reports were indicating the weekend was going to be a revert to winter (seriously???). With the Fight for Air Climb in the books, my Thursdays were no longer needed for stair training...what to do with my "free" time? How about substituting in speed work? With that revelation fresh in my mind, I did a 4-miler (in the afternoon sunshine) and finished with five hill sprints (each with a recovery jog back down the hill). Total mileage ended at five miles. All in a tank top and shorts. And, with 60 bonus tricep dips for a "cool down."
Friday
We had pleasant temps (though a bit chilly in the early morning), but as the day wore on the temps started to fall and the wind continued to increase. Another rest day for me, I took Max for a walk in the early morning sunshine, did my push-ups (60) for the challenge, and some hip-hop recital practice.
Saturday
Ugh. This winter keeps rearing its ugly head and refuses to completely leave for good. The temps were barely above freezing, the wind was psychotic, and there was continuous rain all morning. I had already accepted that my "long" run would not be happening outside, but I decided to fire up Milly for a few miles inside. Mind you, I had to mix in some burpees and jump squats before, during, and after...but I did get three miles done. I also had to head out for a couple games of bowling (Kids Bowling for Kids Sake event), and then there was more hip-hop practice afterwards.
Sunday
Guess what was waiting for us upon waking up Sunday morning? Just as forecasted, there was snow on the ground (and it was still falling). I took Max for a walk around the block, then layered up and ran a couple miles. Admittedly, the snow did look pretty, and it was a most tranquil experience being out there all by myself before the town had come to life...but, this is mid-April. I have pretty much maxed out my snow tolerance for this season. This snow will probably be gone by tomorrow, but still. I really want some seasonal weather...is that too much to ask?
So, that's my week of fitness. Even with the crazy roller-coaster-like weather, I managed to "just run" and be happy with it. My running mileage capped out at 17. There was daily activity for Rachel's challenge (tricep dips, push-ups, jump squats/burpees), and (almost) daily hip hop dancing (which accounts for all kinds of cardio and core work!). And, a few strength-training sessions thrown in as well...just for kicks.

In other news:
My #FridayFashionFlair post on Instagram featured more warm layers. The bright blue tunic and black and white cheetah print cardigan brought a little bit of sunshine to the dreary day outside. Go bright or go home, right? If you want to join me, post a pic of a favorite outfit from the week, use the hashtag (#FridayFashionFlair) and be sure to tag me (@Runningonthefly).
I'm still doing the early morning routine! I love getting outside before the sunrise (most mornings). If I'm not running, I'll be walking (alone or with Max). My morning chai tastes especially sweet after I've had some fresh air in my lungs and and gotten my heart a-pumping.
And, last of all, it's that time of year, again! This is my ninth (and final) year of serving on the Prom/After Prom Committee at our high school. For these past nine years, I have been in charge of the Presentation of Couples (the promenade, if you will, before the dance itself). I have the auditorium to decorate and stage decorations and details to oversee. The theme this year is "A Night under the Stars." Stay tuned....I'll unveil the final stage set next weekend. And I'll be getting plenty of "art squats" this week since I'll be stooped over vast amounts of cardboard drawing/painting/cutting. 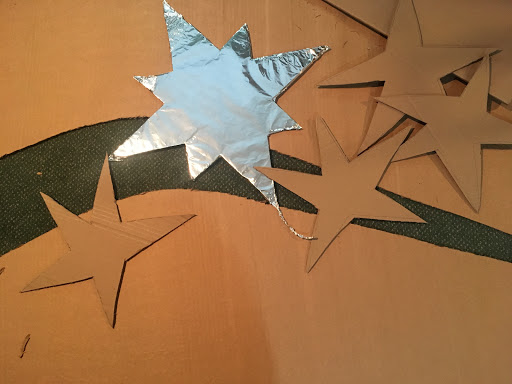 So, that's another week in the books. Hopefully this will be the last one featuring snow on the ground!

Did you have an action-packed  week of fitness? How's your weather? Has spring arrived or has it been a no-show for you, too?

I'm linking up with Holly and Wendy (and their guest host,Teresa) for the Weekly Wrap. This weekly check-in is such a great place to connect with fellow fitness-minded peeps. Please join us!
By the way...are you following me on social media? You can find me at these various platforms:
Let's connect : Facebook Instagram  Pinterest Twitter