Jingle for a Cure 5K 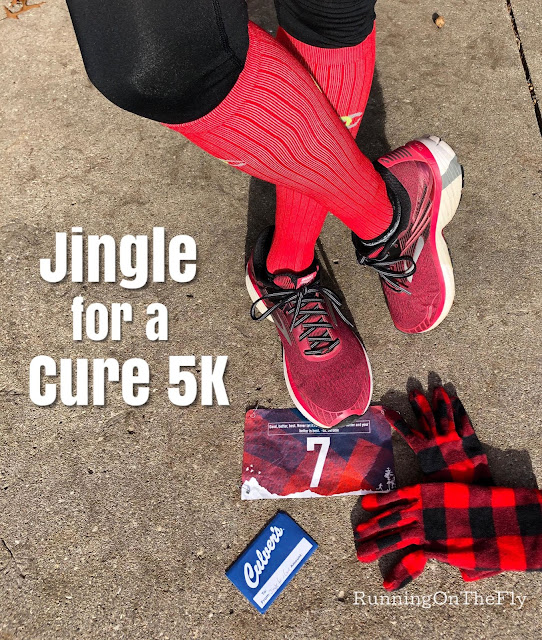 What can I say? I'm a sucker for a holiday-inspired race.

The thing is, there are not many of them to choose from in my area. There were a couple races that I used to do every year, but both of them disbanded a few years ago.

My main running friend, Barb was joyfully basking in a day of grandma-duty, so I was on my own (which is not a bad thing, just saying). I really didn't feel like driving an hour to Des Moines for a short (and solo) 5K.

Enter the Jingle for a Cure 5K!


A new-to-me event, this race took place in Newton (IA), a quick 20ish-minute drive away. With our erratic weather, I decided to wait and register onsite. At the last minute, the hubby decided to come along...he didn't want to run, but went to a nearby coffee shop while I did the race.

All week, the forecast had shown sunny race day conditions. As the race day drew nearer, though, the temps started inching downward. The onsite registration ($30) was the same as the online registration, so I wouldn't be saving any money by registering prior to race day anyways.

With a start time of 9:00, we arrived at the race site shortly after 8:00. I found the registration table with ease, and took the bag of swag goodies back out to the car, and the hubby headed to the coffee shop.

I did a few dynamic stretches and then ran a quick 1/2-mile warm-up run. I got back to the staging area in time for a potty break before lining up.
The temps felt cold, and there was some wind, but the sun was shining strong and bright.  I had three layers on top (as well as arm warmers underneath), including my elf-themed tank. I had considered going bare-legged, but opted for a layer of tights under the red plaid shorts.
The crowd of participants wasn't very big. I'm not great at ball-parking a guess, but I'd say there were maybe 100 or so total people wearing race bibs, and a lot of them (maybe half?) were walkers. I saw a lot of great holiday attire, which is always a welcome sight at a holiday-themed event.

The race started right outside of the Ross Medical Arts Building (alongside the Skiff Medical Center).  The first part of the route had us going due east for several blocks. The 1-milers split off and went right (south) and the 5K racers turned left (going north). We passed the 1-mile mark a few blocks later.

I didn't have any specific goals for this race. Honestly, when the temps are cold, and there's wind, it's a gamble what you're capable of doing. I do always have a goal of running strong without over-exerting myself, especially in that first mile. When I glanced at my watch, though, I saw that I'd run that first split in 8:13... not a dead sprint, but a tad bit faster than ideal. Oops.

A few blocks later, the course turned left (now going west on 11th), and we were on a cement bike trail, which led us into Woodland Park for a few curves and some slight hills.

Just before the 2-mile mark, I could hear someone approaching from behind. I had noticed a few guys ahead of me, but hadn't seen any gals....but one was catching up with  me as we were going through the park. We hung together for a short while, then she merged ahead of me. I was able to get around her, though, her as we exited the park.

There was a big hill right after the park, maybe a 1/2-mile or so in distance. What goes up (usually) comes back down, so there was a nice downhill stretch which took us to the 2.75 mile mark. A short, curved path through another park brought us back to 5th Avenue (almost to where we'd started). There was another brief climb to the the 3-mile mark, then a sharp right to the finish line in the parking lot....and done!
As always, it felt really good to be done! It didn't feel like I was "racing," but I could tell I definitely had a good tempo pace going. As I was making my way back to the medical building, I paused to stretch for a few minutes. The gal (from the second mile) came over and congratulated me. I thanked her, and told her I could tell she was right on my tail for most of that last mile. She'd finished only a short ways behind me...I think the hill (maybe) had gotten the best of her.

There were a lot of walkers, so it took awhile before they got to the awards ceremony. I talked with a husband and wife for awhile while waiting. The husband was the second place finisher of everyone, and he ran the entire race in elf shoes!
I wound up being the first place overall female!  It didn't really sink in that I'd actually "won" the race (in terms of all the lady racers) because there were several guys ahead of me. I've had some age group finishes before, but never a first place overall. This is me we're talking about, one of the proverbial "picked last in gym" gals because of my lack of athleticism.

Instead of medals for awards, the first place overall male and female received gift cards to Culvers. The first place age group winners received travel coffee mugs. There was a lot of swag for a small race...long-sleeved cotton event shirts, a couple of lip balms, hot chocolate, candy canes and a water bottle.
Even though the field of runners was relatively small, I'm very happy with my performance and finish time. I almost gasped when my watch beeped and I saw I'd run the first mile in 8:13 because it didn't feel unusually "fast" to me. I guess my pace has progressively improved this past year, but I'm still not used to it. Of course, the cold air makes it easier to run at a faster pace than usual. The course wasn't too much of a challenge, but it did have a lot of rolling hills. The big hill (near the end) was tough...fairly steep and decently long. I could tell gravity was on the verge of winning, but I just kept going and focused on pumping my arms a bit more to push me along. The downhill, though not as long as the uphill had been, was a nice reward. Something I learned a long time ago is not to fight the hills, especially the downhills. I don't try to race down the hill, but I just let my legs go without any holding back...especially when I'm that close to the finish line.
Since I didn't get a medal to show for my first-ever first place, maybe I should keep the little gift card envelope and attach a ribbon to it. Kind of a make-shift medal, if you will. Although my 26:10 finish time is one of my faster 5K finishes, if this were a bigger event (or even a much warmer day), the odds of my getting first place would be slim to none. And that's alright. Often times, how you place is contingent on who else shows up (or who doesn't LOL). If you run a strong race, and are pleased with your efforts, it's still a victory.

Have you run any holiday-inspired races recently? If so, did you dress for the occasion? Ever registered onsite for a race...then surprised yourself with a better-than-expected finish?