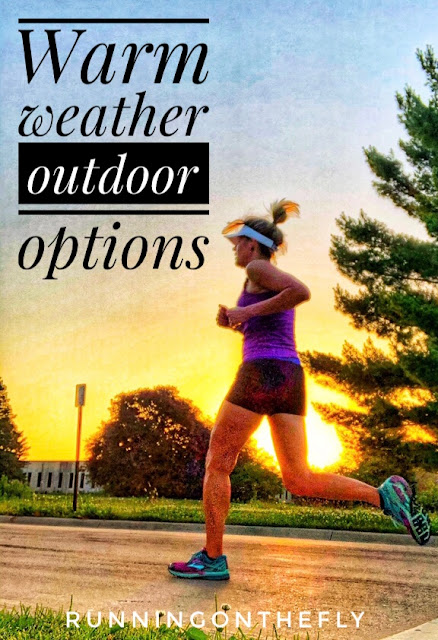 It's been a hot summer thus far.
Trust me, I am NOT complaining (after all, I waited 9 months for summer to return to Iowa). The heat does make it a bit more of a challenge to enjoy the great outdoors, though.
I make it a priority to take most of my cardio workouts outdoors. Even when the mercury is off the charts, and it's hotter than Hades, I usually shun the inside option. I figure if I'm gonna be sweating anyways, I might as well enjoy the scenery.
That said, the extreme heat of summer is nothing to take for granted. It commands all of your respect and every last ounce of common sense.
It's no secret that when it comes to fitness, my first love is running. First and foremost. I don't run every day, nor do I run especially far every time I lace up my Brooks Adrenalines. I simply enjoy the mere act of running...the sound of my feet striking the pavement, the feel of sweat running down my back (and often in my eyes), and I love the sensation of endorphins washing over me after I've finished.
The summer weather in Iowa, as with any season, is always variable and tricky. Granted, more summer runs are going to be in hot temps than cold, but there are sporadic cold fronts that come through and knock out the humidity for a few brief periods. No doubt the toughest thing for most runners to deal with in the summer isn't the heat, but the humidity. A heavy dew point will make it more difficult to breathe, especially the faster one tries to run. Even if you're wearing tech fabric running gear, if it's super humid, it will take longer than  normal for the dampness to evaporate from the fabric.
A few constants with summer running:
***Everyone has their own barometer when it comes to heat tolerance. What feels warm and comfortable to me may feel extremely unbearable to someone else.
***Hydrate, hydrate, and hydrate some more. Many people don't realize their bodies are dehydrated until it's too late (runners are stubborn that way LOL). Water and electrolytes are necessities.
***It's in your best interest to run slower than what you may be used to doing. The odds are good your body will want do that naturally, so let it. Save your tempo runs or speedwork for less extreme temps.
***Even if you're not a natural early-riser, the heat will usually be coolest before the sun emerges. If you're hoping to run a long distance, starting your run as early as possible (even in the dark) may be something to consider. 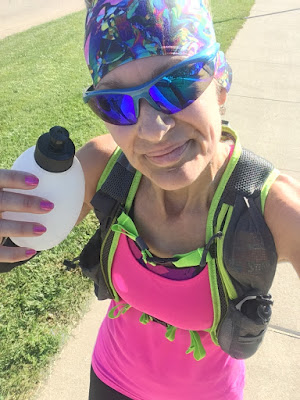 hydration is key
What about walking? Did you know walking offers very similar benefits as running does? Depending on your pace, the cardio burn can be comparable to running (though running obviously has more "bang for the buck" due to the extra effort required).
For me, the biggest benefit to walking is that it's much friendlier to my joints. The impact of your feet striking the pavement isn't as severe as with running. It will take you longer to go a specific distance, but with it requiring (somewhat) less effort, it usually won't be as tiring.
A few things to consider with summer walking:
***Since it's a lower impact activity, the need for warm-up/cool-down isn't as crucial. It's still a good idea to do some pre/post stretching, though.
***You can get a good sweat going, but you probably won't be as "warm" as you would be if you were running the same distance. Often times, I need arm sleeves or a light jacket (that I can take off and tie around my waist) if it's a cool morning or the humidity is low.
***If it's an especially hot day, and you still want to get outside, a walk may be a better option than running since it's not as strenuous. 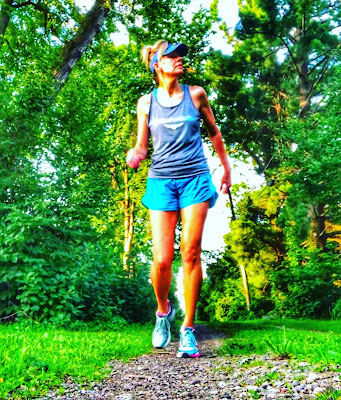 seeking out a shaded trail may be a good option
In recent years, I have been biking more. I'm still very much a novice, but it's been a fun new fitness option to explore.  I have a mountain bike, affectionately named Gustavas. It's not as sleek or road-friendly as a road bike would be, but that adds an element of challenge to my rides. The bike weighs more, and the tires are rugged. Climbing hills can be tough...but that's all good. I'm working different muscles (well, hello there, quads!) and giving my usual running muscles some down time. 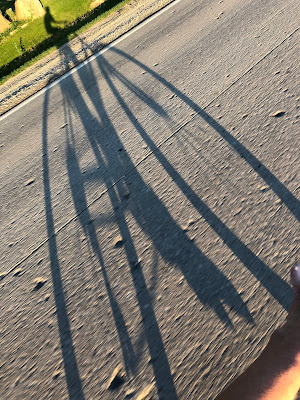 Also, with biking, there's ZERO impact on my knees and ankles, so most rides feel pretty smooth (unless I hit a pothole or cross railroad tracks). Since a lot of my riding is just in town, I'm not cycling especially fast or with a lot of effort, making it a great option if I want to get out of the house but don't have a lot of energy on tap. None the less, cardio is still happening and my legs are getting some action.
Some things about biking in the summer:
***The hot temps are MUCH more bearable on a bike than on foot! Again, I think it's that "less effort required" thing.
***Even if it's a warm day, I usually feel colder on the bike. That's all well and good on a really hot day, but on the moderate mornings, I usually feel most comfortable with arm sleeves.
***No matter which direction the wind is coming from, it always feels like it's in my face. That's not all bad, though, because it does feel refreshing (most of the time).
***A strong headwind is much tougher to fight on a bike than on foot...just saying.
***Gravity will work both with you AND against you on a hill LOL
Anyways, those are some comparisons and contrasts to three outdoor cardio options that I have been utilizing, even in the extreme heat of summer.
How do you feel about being outside in the heat? Do you opt to stay inside, or do you find a way to get outside, no matter how hot it gets? Or, do you have no preference to be in or out?
**disclaimer**
Some of the text in this post first appeared in a previous post.
I'm linking this with Kim and Zenaida for the Tuesday Topics Link-Up
I'm also linking with Debbie,  Rachel, Deborah, Lisa, Sandra and Jenn for the Runners' Roundup
By the way...are you following me on social media? You can find me at these various platforms:
Let's connect : Facebook Instagram  Pinterest Twitter
Posted by Kim at Running on the Fly at 11:34 PM