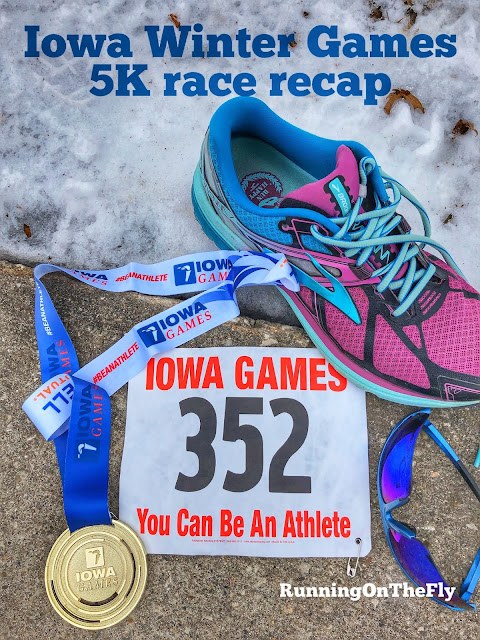 Since 1987, Iowa has hosted the Iowa Games. Similarly to the Olympic Games (but obviously on a much smaller scale), there are summer events and winter events that take part over the course of a couple weekends (in each season) encompassing various sporting events.

I have participated in the Summer Iowa Games, doing the 5K and 10K road races in 2016, 2018 and 2019. It's never fit my schedule to take part in the Winter Iowa Games, but that all changed this past weekend.

The city was Dubuque (a city along the Mississippi River) and the event was the 5K road race.

My friend, Barb, and I made the 2-1/2 hour trek to Dubuque late Friday afternoon, arriving in time to attend the recognition dinner. Barb's company is the title sponsor, and she was there not only repping the company, but also as a participating athlete.
The race had a 9:00 a.m. start time Saturday morning, and I had not preregistered. We arrived on the scene before 8:30, giving me ample time to get registered and get my race pack.

An awesome perk was the staging area, Carver Elementary School, so we had a warm place to hang out before the race started and access to heated restrooms.
We headed out for a short warm-up run (about 3/4-mile) and got a feel for the cold (though bearable) temps. The wind felt strong because we didn't really have any kind of a barrier (trees or substantial buildings), and the temps were cold...but, oddly, it didn't feel that bad given the recent cold spell we'd endured.
The officials ushered us outside, at 8:55, to the edge of the parking lot. With the blare of the bullhorn, we were off and running, quite literally.

The first 1/4 mile (or so) had us heading east, riding a pleasant tailwind and a grand downhill. As soon as we turned the corner, onto Radford (heading due south), the cross wind came into play. We only had a short ways on level terrain, though, because shortly before the 1-mile mark we already were heading back up a gentle incline.

Barb and and I hung together for most of that first mile. Just after the mile mark, though, I could feel myself inching just slightly ahead.

The first part of the second mile had us going south until we turned right, heading west, just after the 1-1/4 mile mark. Since the race course was an out-and-back, there was a hairpin turn-around at the halfway point...and we were still riding a slight incline to get there.

I made it to the turn-around, and spotted Barb, shortly after I'd made the the turn. As they say, what goes up, comes back down...so there was a nice decline for a short ways.  It felt good to just let my legs run free for a few minutes and enjoy the downhill.

The downhill segment was pretty short-lived, though. After making the left turn (a short ways before the 2-mile mark), there still was a good 1-1/4ish mile remaining...most of which would be back on an incline, and (now) into the wind.

I'm not afraid of hills, but they are especially challenging on a cold morning with wind in your face. I just kept trying to remember to pump my arms to keep the forward-momentum going. Although I felt a bit of relief making it to the final corner (and only having about 1/4-mile to the finish line), the final jaunt had the strongest uphill of the morning and it was straight into the west wind.

It was nice seeing a small herd of people as I made my way to the finish line. Hearing cheers (from strangers) and sharing a few random high-5's never get old...am I right?

Although it was a far cry from a PR, I'm happy with how I finished considering the hilly course and the non-stop wind. Besides, "fast and flat" race courses are for sissies (in my humble opinion LOL).
My splits showed a nice "progressively positive" story - 8:20/8:35/9:20 (and 1:05 for the final .12mile).

I did wind up snagging a first place age group win, though I do believe the cold weather probably kept a few people away on race morning. Overall, the attendance was small, which is unfortunate given the organization of the event.
My stats:
27:15 official finish time
1st AG out of 6
4th female (out of 22)
17th overall (out of 43)

Barb also placed first in her age group, so it was a double-gold kind of morning for us.
Overall, I thought this was a great event, just unfortunate more runners didn't participate. I guess not everyone is as willing to suck it up and face the weather as others. As mentioned, the event was very well organized and well supported in terms of volunteers. The majority of the race course had us on city streets with a narrow lane coned off for the runners. The traffic wasn't much of an issue, though,  and there were police officers positioned at the two corners where the route had turns.

For swag, there was an option to upgrade to a tech fabric shirt, but I opted to just go with the regular cotton (unisex) shirt. I have enough event shirts as it is, so another tech shirt thrown into the mix was definitely NOT needed. I do like the Winter Iowa Games graphics!
Medals were given to the top three finishers in each of the (5-year) age divisions. 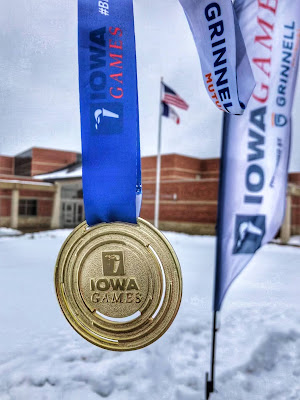 If you'd like more information, check out the Winter Iowa Games website (HERE). There are many  more events than just this road race...there's also skiing, snowboarding, ice hockey, indoor swimming & diving, volleyball and lots of indoor soccer (just to name a few).

Does your state offer a state-wide series of games such as this? What's your preference - a flat and fast race course, or one with some hills?