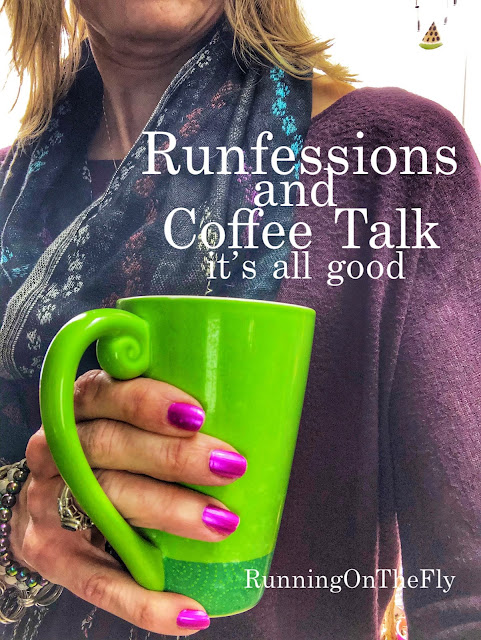 So, what exactly happened to January???

For one of the longer months (31 days, after all) and a cold time of year, January actually went rather quickly. No complaints on my part. The temps were actually more mild than extreme (unlike a year ago). Although I can tolerate the cold, I'm eager to move closer to Summer (well, and Spring, too).

Anyways, shall we gather for a warm beverage and chat a bit? Better yet, shall we share a few runfessions? Surely I'm not the only one with a few of those...

Let me start...if we were chit-chatting, here's a few things I'd share about the latest happenings from my little corner of the universe:

First of all, I'd runfess that my January goals were kind of a bust. I can't blame laziness on my part,  but I can admit to forgetfulness. Usually when I do monthly goals or challenges, I make them pretty specific. Also, they're usually daily things that don't require much of a time commitment. These January goals were meant to be done on a flexible "now and then" basis, and that was a total fail. They happened, but any semblance of consistency was MIA. Lesson learned; moving on.
Which brings me to my February goals. Let me runfess I've already previewed these daily objectives this week, and they're a hit. Nothing wrong with a little head start, right? I'm all about stair-climbing this time of year, so 20 daily flights are not a big deal. My pushups always need work, and there are many different variations on doing them. And, that daily 1-mile walk? It may happen on the treadmill, on occasion, but it will be an intentional walk...not an accumulation of daily steps. I can do the daily walks easily in warm weather, so this will be a great challenge to make them happen in the cold. 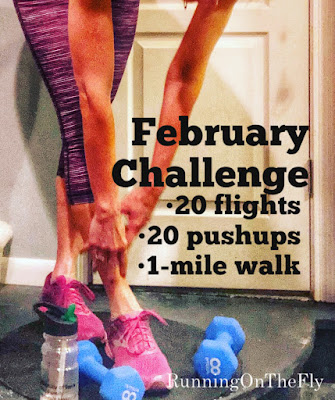 Can we talk about the DOMS (Delayed Onset Muscle Soreness) for a minute? I'm no stranger to experiencing these aches and pains, but I'll runfess I was a bit blind-sided by them this time. Last weekend, I felt like an achy, breaky mess of sorts. Not sure if it was from the heavy snow shoveling and throwing (from a few days prior), the barefoot stair workout (late in the week), Saturday's hilly 5K race (with my body in an already compromised state), or a combination from all the above. All I know, come Sunday (and still on Monday), my legs and back were still a bit cranky. I'm not a "woe-is-me" kind of gal, so I didn't whine much about it, nor did I curl up under my thick blankets and set up homestead on the couch. It did make me appreciate the fact that I can do all that stuff, though, and still function...albeit in a slower state of motion. 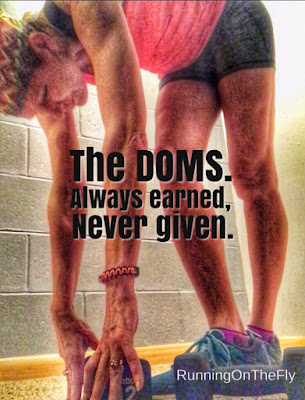 Next, I'd share my excitement for the Fight for Air Climb (March 29th, in Des Moines, IA). Can I runfess how weird it was to not take part last year (it was the same weekend as the Credit Union Cherry Blossom 10-Miler)? Not everyone embraces the stairs like I do, and that's okay. For me, they're a great lower-body workout as well as a pseudo hill workout (since the incline mimics that of a short, but steep, hill). Other than last year, I've participated every year since 2013 so it will be great to return to the stairs of downtown Des Moines.
Lastly, I'll tell you briefly about the #FirstWorldProb I've been slowly resolving on my blog. I'll runfess that it's an easy fix, though quite tedious. Several months ago, I discovered many of  the pictures had disappeared from several of my 2019 blog posts.  All the text was still there, so that was a good thing, but it was frustrating to have the majority of the pics gone. I used to upload my pics to my drafts, via an app, but said app no longer allowed said pics to upload as of last February. I thought I'd figured out a great alternative (copy/pasting from Messenger)...only learning (several months later) the "links" to those pictures only remained active for a few months, thus the pics would no longer show after awhile. Ugh. Thankfully, all the missing pics are still intact on my Running on the Fly Facebook page, and all of them are still in Messenger. So it's just a matter of going back, accessing the pics and then saving them to my computer's hard drive. I'm not a computer genius, by a long shot, but I'm grateful I discovered this glitch and have found a way to rectify it. Glass half full.

So, that's what I'd be sharing with you, over a hot beverage, in the company of friends.

How about you? Got any great runfessions to share? Any February goals on tap? Ever done a stair-climb event? Issues with disappearing pics from past blog posts?


I'm also linking this with Meranda and Lacey for the Friday with Fairytales and Fitness link-up.
Posted by Kim at Running on the Fly at 11:24 PM