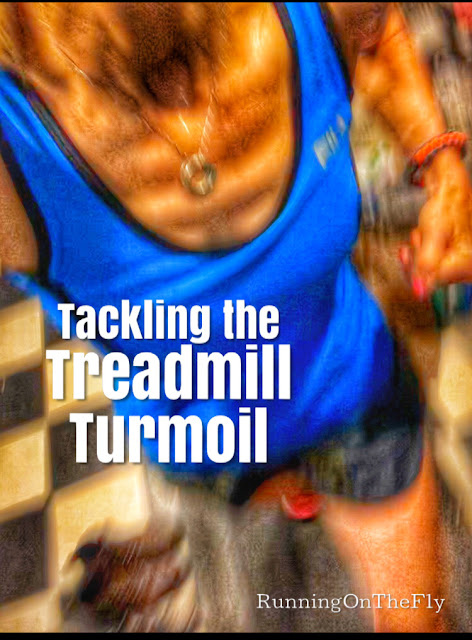 The treadmill has been my nemesis for quite some time.

I'm not afraid of it. I'm not intimidated by it. I'm certainly not in a battle with it. But I avoid running on it at (almost) all cost.

A bigger-than-BIG goal of mine, this winter, is to have a much more open mind and a welcoming heart when it comes to indoor running. Heck, if I can make it through a Polar Vortex (and endure upwards of 20 Milly runs, all in one season), I can probably survive most any (near) catastrophic experience.

That's not an exaggeration.

Alas, I've decided to share a few tricks that got me through last year's Polar Vortex. Keep in mind, these coping mechanisms are unique to me, my mindset, and the particular locale of my treadmill (whom I not-so-fondly refer to as Milly).
Here are some strategies that have worked for me in logging time on the treadmill...

Run short. Consider doing a simple, short run. It can be just a couple of miles in distance, or even just 20-30 minutes of cardio. You could make it into a quick speed workout, or just 30 minutes of easy-does-it running. Keep it short and sweet and it may not be so bad.

Mix it up. Personally, I just cannot do long, steady runs on the treadmill. Seriously, I think I have run six miles (once? maybe twice?), but usually five miles is my max. Those of you who can knock out double digit miles have my utmost respect, but not my envy (I say that sincerely). I usually have to switch up the speed and/or the incline intermittently. A five mile run goes a lot quicker (for me, at least) if each 1/2-mile has something different to offer.
Make it a progression run. Gradually increasing the speed has many benefits, the least of which is knowing the second half of the run will go faster. Depending on how far you're running (or how fast), you may want to reserve the last mile (or two) for a cool-down.

Look elsewhere. My treadmill resides in our mud room, so there are no big screens for entertainment or distraction. A lot of my runs also happen in the early hours, so that window, looking out into our backyard, often times acts as a mirror when it's dark outside. Yeah. That gal in the window is entertaining for maybe the first mile, and then I get pretty bored with both her and her flopping ponytail. If you need a distraction, possibly your phone or iPad/tablet may suffice. Myself, I just suck it up and go without because it isn't worth the extra work (of focusing on a small screen while in movement), and I don't know how secure it would be from bouncing or sliding.
Play a few mind games. Similar to mixing it up with intervals, I often times run the last 1/4-mile (of each mile) at a faster pace. It may seem trivial, but running 3/4 of a mile at a "steady, boring pace" is MUCH easier (mentally) than running an entire mile at said pace. Also, if I feel like I need a break, I try to pause at the 1/4-mile mark...because that 3/4-mile remaining will go so much faster than if it was an entire mile. Hey, it works for me.

Swap in some strength-training breaks. As much as runners love their cardio, it's no secret a little bit of strength work makes us even better at running. Once in awhile, I pause after each mile and do a short set of upper-body strength moves, as well as a few lower-body moves. This is more of an all-body workout than an actual "run," but it gives me a few miles of cardio as well as some strength-training.
Have a sense of humor. There's much to be said of the simple act of laughing. I have a running page on Facebook (Running on the Fly) and an Instagram account, both of which have been valuable mediums in connecting with other runners and fitness enthusiasts. As a result, I usually share a post-workout pic after most of my workouts or runs. Seriously, though, no one wants to see sweaty selfie after sweaty selfie with the same smile from the same treadmill...am I right? After all, there's only so much filters can do to liven up a boring setting. Well, last winter, I got the idea to take my post-treadmill selfies outside...kind of an act of rebellion from the dreadful "inside" runs the cold weather had forced upon me. Ironically, that very cold weather (for a very quick moment) actually felt quite refreshing following a sweaty, indoor run. Cryotherapy at its purest form. So, the outdoor selfie became a ritual.
Bottom line, the treadmill run is your's for the taking ... but it does not have to happen. Trust me on this, the world will not stop revolving, the sun will not disintegrate, nor will your fitness tank overnight if you skip a run. Remember, we get to choose to run. There have been a few times when I had a number in my head (like, five miles). I'd make it to the 4-mile mark, and some times that last mile felt like an awesome victory for making it that far.
Other times, that last mile loomed over me, and practically taunted me into submission. Once, instead of fighting my way through one more mile, I hit the OFF button and walked away, with ZERO regrets. Basically, I ended the run on my own terms. If your body is tired, your form will probably be compromised as well. Often times, your mind will be, too. It's okay to call it. There's no shame in ending a run before things go south.

So, those are a few tricks I have in my treadmill survival arsenal. Not everyone needs such devices to get through the winter, but I do. I'm a die-hard summer runner gal at heart.  I can tolerate the Winter, but that doesn't mean I have to love it. 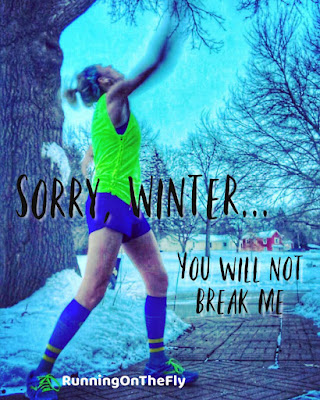 Care to hear a bit more about me and my treadmill? Check out these posts:
The Treadmill: Five Recent Reality Revelations
A Treadmill Catharsis
I named her Milly

How do you feel about winter running? Do you find yourself running less in the cold weather? Running just as much? Do you take your runs to the treadmill when the temps get cold?