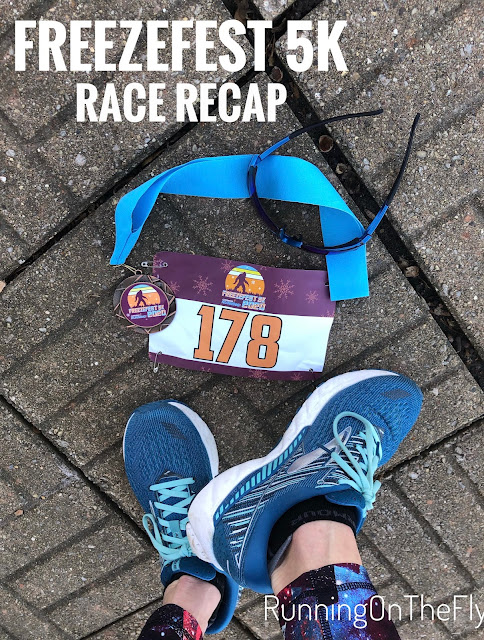 That which doesn't kill us...

We're much stronger for the fight, right?

So what if there's a 20mph wind (the air temps were almost 60F warmer than the windchill two days prior). A runny nose (meh, it IS possible to breathe through one's mouth). And, a weird "out-of-joint" thing going on with the hip (well, that's just one body part...all others were fully functioning). Glass half full, after all.

Care to hear more about the 2020 FreezeFest 5K?

This was actually my second hurrah at this event. I'd first heard of it a few years  ago, but last year was my first time being able to swing getting there (2019 recap HERE).

Affiliated with the Corridor Running group, The FreezeFest is one of several events happening in the eastern Iowa corridor. Other events they have hosted (that I have run) include the NewBo Run Half Marathon and the Fifth Season Health Solutions 8K.

We'd just gotten through a brief arctic blast (with wind chills as low as -32F), so the above-freezing temps (in the mid-30F's range at race time) didn't feel too frigid. That said, there was a brutal 20mph wind coming at us, from the west, which was anything but pleasant.

With a start time of 11:00, Barb and I pulled out of town around 8:30, arriving at Squaw Creek Park just before 10:00. There were 450 allotted runners (plus volunteers) and we'd been warned of the limited parking near the race site (though there was overflow parking at a nearby shelter and shuttles available). Thankfully, we got there just before the main parking lot was at full capacity.

We headed inside, got our packets, and used the restroom. Since we had plenty of time, we decided to go for a short 1-mile warm-up run.
For the past few weeks, ever since my last race (the Winter Iowa Games 5K), my right hip has felt a little off. It doesn't hurt, but feels like it's disjointed (for lack of a better word), and the range of motion seems a little compromised. Most runs, after a mile or so, things loosen up and all feels better, so I was hoping a warm-up run would work its magic this morning as well. Only, I'd just ridden in a car for upwards of 80 minutes, and there was a nasty headwind to fight for the first half of that warm-up mile. Things did feel better after that warm-up mile, but still not ideal.

I tried to do a few stretches while we waited for the race to start, as well as some dynamic warm-up moves (high knees, butt-kicks, squats, and side lunges). We stood around for a good 20+ minutes, and it was difficult to stay in constant motion until we were ushered out to the start line.
We lined up, heard the National Anthem sung, and we were off!

Thankfully, that first stretch of the first mile gave us a tailwind because my hip (and vicinity) had already tightened back up. I had my Garmin and my music with me (last year I'd forgotten both of them). It was too difficult to read the numbers on the watch face, with the bright glare of the sun, so I was somewhat clueless as to what my pace was doing. It didn't seem like I was going very fast, though, because my hip felt so tight.

Barb passed me a short ways before the the first turn-around (about 3/4 mile into the race). I tried counting how many gals were ahead of me as they came around the hairpin turn. I definitely was having a tough time with my wonky hip, so it didn't feel like I was "racing," but I still wanted an idea of where I was within the field LOL As soon as I made the turn, BAM, there was the wind...not quite a headwind (yet) but a strong blast I hadn't felt until changing directions.

It wasn't long, though, before I'd made the turn back onto the main straightaway, which had me headed due west, with a fierce headwind to battle for the next (almost) mile. It's a great thing the clouds had parted, and the full sun had emerged right before the race had started. The temps were cold, but not painful due to the bright sunlight. But the wind was ferocious, and it felt like I was getting a headache from it.

Anyways, I soldiered on. There was an aid station set up near where the start line had been, which also was the approximate halfway point of the race. As I ran by the water stand I spotted Angie, a runner friend who volunteers at many of the Corridor Running events. She gave me a cheer and it was all I could do to force a smile because I was battling through such a struggle fest.
Eventually, I made it to the next turn, this time going south for awhile (Whew! Briefly out of the headwind for a bit). This was the other out-and-back segment. I (again) tried to take inventory of how many other gals were coming back from the turn-around, but gave up. After I counted 20, I quickly lost interest LOL Besides, most were so layered up in hats and headbands, it was difficult to gauge anyone's age.

Barb was still a short ways ahead of me. I was surprised, though, to see she hadn't really gained much distance on me when I saw her coming back just as I was approaching the final turn-around. As you can guess, immediately, after making the turn, the wind hit me again. By then,  I'd gotten pretty warm (in other words, sweaty), so the wind felt like it was blowing right through all three of my layers.

This final stretch of the race, the last part of the second mile and the first part of the third, was really tough. The W/NW wind felt like it had gotten even stronger. Though my hip was feeling better, it still was not as loosened-up as I'd hoped it would be.  Barb later told me that she almost thought she wasn't going to make it on that part of the course, either. The wind was so unrelenting!

Finally, making the final turn, and now heading back east with just over 1/2-mile remaining, I had the wind at my back. The thing is, by then I was so exhausted from fighting the wind and wondering about my hip, that glorious tailwind really didn't give me the oomph I'd have expected or wanted.


I crossed the timing mat, paused to stop my watch, and immediately saw Barb. It turns out she was only about 10 seconds ahead of me. We walked over to get our timing printouts. My Garmin was showing 26:18, which surprised me because it felt like I was running a lot slower. As mentioned, I'd tried glancing at my watch a few times, but it was too hard to read in the glare of the sunlight, so I didn't have a grasp on my splits or pace. 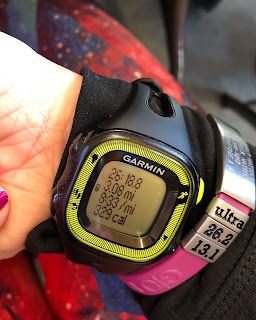 Furthermore, seeing my printout, with an official time of 26:11 was kind of dumb-founding. And,  noticing that I'd actually snagged a 3rd place age group had me in a state of disbelief. I'm not trying to play the humble-brag card (totally not my style), but this race seriously felt so much slower than what my finish time indicated.
I knew the results had not yet been finalized, so I didn't let the 3rd place AG really sink in. Barb and I had decided to run a little more (for a little extra distance as well as a cool-down) before the awards ceremony. Barb's printout indicated she'd gotten first in her age group, so we knew she'd at least be getting some hardware. We grabbed a few snacks and saved a spot at one of the tables, and headed back outside.

Ugh, already, in that short span of 10-15 minutes, my hip was feeling tight again. Nothing painful,  but oddly "off." We took off running in the same direction as our warm-up run. We were fighting the headwind, but knew we'd have it behind us after we turned around. Great strategy, right?

We hadn't gone too far and I could tell this cool-down run would be no longer than a mile. I was done with the wind, my nose was a goobered-up mess, and I didn't want to over-do it with my hip. Whomp Whomp.

Back inside, there was plenty of post-run food and drink. The RD sprinkled in numerous door prize giveaways between the various age group award announcements. Barb's first place AG held, and so did my 3rd place. I even secured a free registration for an upcoming half marathon (Run CRANDIC) at the end of April.

This event was very well organized! There were numerous updates on their Facebook page, as well as pre-race emails. The funds raised from the event support and benefit the Boys and Girl's Club of Cedar Rapids.

For swag, the long-sleeved shirts are nice, sporting the same logo as the race bibs and the medals. There was an option to upgrade to a hoodie, for an extra $5.00.
There weren't finisher medals (and I'm alright with that, for a 5K at least). The age group awards went 3-deep (1st, 2nd, 3rd) in 5-year increments. Also, nice-sized trophies for the overall male and female champions. 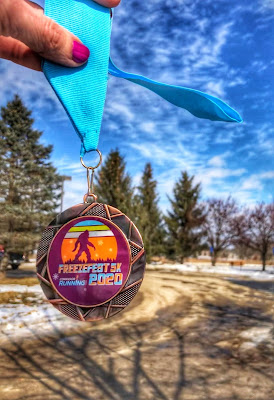 All in all, this was a great event, it's just a bummer the race itself was such a challenging endeavor for me on race day. I can't blame the race course, because it was flat and scenic. The wind was tough to fight, though, and the ongoing hip discomfort was a little unnerving. As I said, nothing really hurt, but something definitely felt "off." That said, I'm still in awe how fast my finish time actually was because it sincerely felt like I was running much slower. Even my splits were jacked ...8:16 (remember, there was a tailwind at the start LOL), 8:41 (mostly against a headwind), 8:42 (with a tailwind towards the end, and still slower than mile 2!).  As frustrating as the race felt, I'm grateful my speed seems to be maintaining (last year's finish time was 25:56, so this year's time wasn't that much slower given the battles fought against the wind and with the hip).

I'm at peace with everything, though. Onward!

Have you ever run a tough race on "easy" course? How do you feel about wind on race day? The 5K distance...love it or dread it?